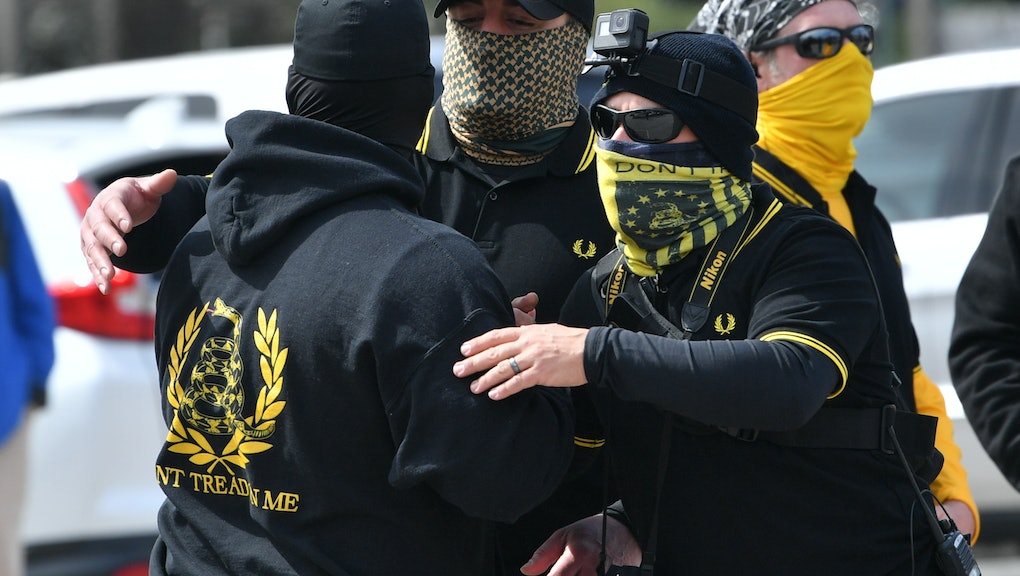 Oh, Canada. Our humble, slightly colder neighbor to the north. Land of hockey, Tim Hortons, and Letterkenny. Canada may be far from perfect, but in many respects, it's got the U.S. beat.

For instance, while America is riddled with white nationalist groups bolstered by four years of the Trump administration's proto-fascism, Canadians this morning woke up to learn that its particular branch of the Proud Boys family tree has yeeted itself into the ether, declaring in a message on its official Telegram channel that "the Proud Boys in Canada is no more. Anyone walking around in Fred Perry polos and Proud Boys gear are simply posers to our organization."

The surprise decision to disband Canada's chapter of the ultra-nationalist, self-proclaimed "western chauvinist" group comes shortly after — and in no small part because of — the Canadian government's decision to label the organization a terrorist entity this past February.

"Their violent actions and rhetoric are fueled by white supremacy, anti-Semitism, racism, homophobia, Islamophobia, and misogyny, and unfortunately, often in combination of all of the above," Canadian Public Safety Minister Bill Blair explained at the time, adding that although the Proud Boys' leadership role in the attempted coup at the U.S. Capitol Building on Jan. 6 helped inform the decision to designate the group a terrorist threat, the decision was as much tactical as it was political.

"As disturbing and concerning as those images and those events were," Blair continued, "they also provided law enforcement and our intelligence services with a trove of new information in which quite frankly, many of these groups revealed themselves."

According to the message left by the group, however, the terrorist designation was too much to contend with.

"The truth is, we were never terrorists or a white supremacy group," the group administrator insisted. But, he added later, "fighting this in court will prove to be expensive and time-consuming."

As good as the news that a group — or at least, a faction of one —founded on violence, misogyny, and ultra-nationalism is calling it quits, it's far from clear what the final result of the Canadian Proud Boys' disbanding will actually be. The group itself promised that its members would continue "to fight for western values" as individuals, rather than en masse, raising the specter of an increase in decentralized violence and bigotry. Similarly, while the Canadian Proud Boys did indeed represent a threat to communities there, the true epicenter of the group remains in the United States, where the organization continues to thrive, despite increased law enforcement scrutiny after the events of Jan. 6.

More like this
Newsmax bent over backwards to be pro-Israel, ended up being anti-Semitic
By Rafi Schwartz
Marjorie Taylor Greene and her team are just openly accosting people in Congress now
By Rafi Schwartz
COVID vaccine holdouts have a message to lawmakers: Show me the money
By Rafi Schwartz
Stay up to date