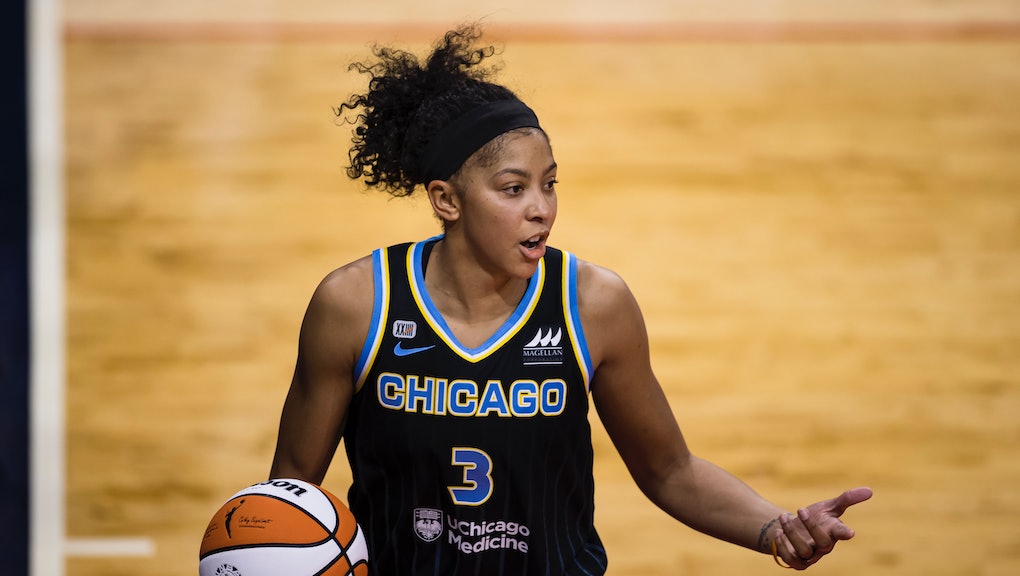 To commemorate the 25th anniversary of the WNBA, two-time WNBA MVP and Chicago Sky star Candace Parker will become the first woman to grace the cover of the NBA 2K video game series. She'll appear on the edition of NBA 2K22 that's sold atGamestop when the game is released on September 10. And this should be the last move to finally convince video game makers that it's been time to make a WNBA video game.

Parker's cover announcement comes less than a year after NBA 2K21 became the first video game in history to offer a single-player career mode for the WNBA, allowing players to play an entire WNBA season, run the league, and take a player they created through the arduous journey of making and thriving in the association. There is no word on if that mode will return in NBA 2K22, but Parker being placed on the cover is a good indication we'll be able to drain threes with the New York Liberty's Sabrina Ionescu this fall. That said, it has long been time for the WNBA to escape the NBA's shadow and shine in its own video game.

"I think our game is different than the NBA; now it's embracing that fact," Parker told ESPN. "Now more than ever, fans want to follow the athlete. Through social media, through video games, it's adding and benefiting the WNBA."

Not only has the WNBA never had its own video game, the first time female professional basketball players were ever included in a video game was in 2017 for NBA Live 18, 21 years after the WNBA was formed. Even the progress has had pitfalls. NBA Live 18 may have been the first game to feature WNBA players, but had commentators who never mention any of the WNBA players on the court by name. Watching a basketball game without commentators giving historical context, player stats, or stale jokes is the same as watching a silent film where people just walk around. NBA Live 19 may have broken gender barriers by allowing women and men players to play on the same team and against each other in its The One mode, but failed to include a career mode for WNBA players, which is standard for every basketball game over the last few decades. NBA 2K21 rectified a few of NBA Live's issues and as a result, showed us a bit of what a WNBA video game could be.

The non-existence of a women's basketball game becomes more embarrassing for the video game industry after you realize what ludicrous basketball games were already made. There have been basketball video games with rappers playing basketball (RapJam Volume 1), men twirling in the air like Simone Biles before dunking (NBA Jam), cartoonishly exaggerated street ball (NBA Streets), and whatever the hell Barkley Shut Up And Jam was supposed to be. Women have been playing organized basketball since 1892, and not one video game company thought it wouldn't be as far-fetched to give them their own video game as it would be to have NBA players shoot around a flaming basketball. There is no better time than now for a WNBA game.

Female gamers account for more than 41% of all gamers in the United States and in 2014, twice as many adult women played video games as young boys. Women are also 79% more likely to make in-app purchases in a mobile game compared to men. With NBA 2K gamers regularly spending hundreds of dollars on Virtual Currency (VC) in order to get upgrades for their created player, a WNBA game is a surefire cash machine waiting to print money. And the game wouldn't only attract women.

Utah Jazz center Rudy Gobert is a three-time Defensive Player of the Year and between April and June, when the Jazz were securing the best record in the NBA, Candace Parker had more Google search activity than the second most important player on an NBA title-contending team for most of that two month period. While the WNBA's revenue is less than 1% of that of the NBA, video games are how many people fall in love with basketball. Most people don't watch every team play, but they know the name of the sixth man on the Chicago Bulls because he couldn't miss a 3-pointer when they played with him.

A WNBA video game has the potential of leading kids to play as athletes they may have never known, and usher in a generation of new fans that can transform the league into the international powerhouse it has always had the potential of being.