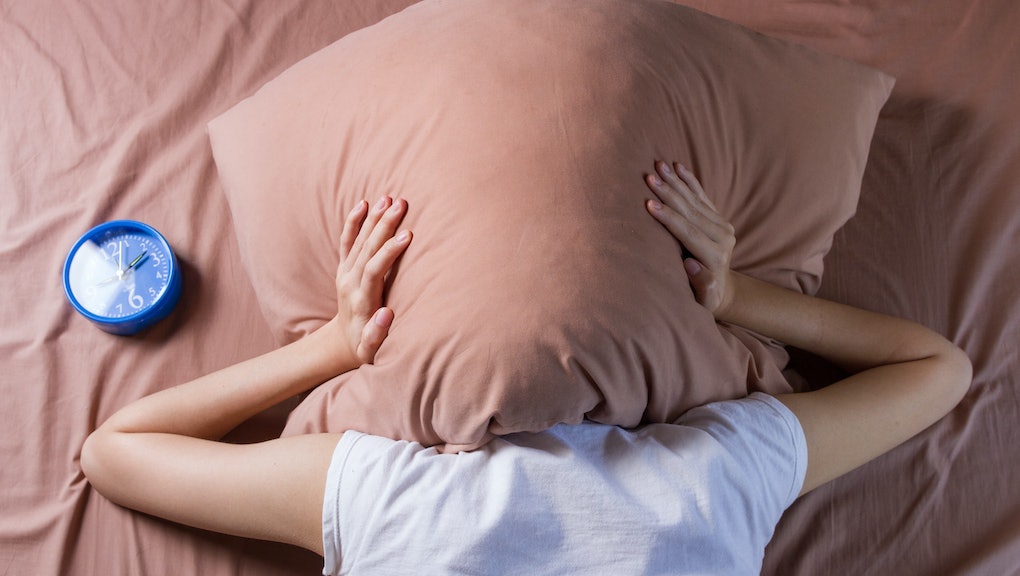 Can't sleep? Make these 2 small changes to get a better night's rest

Some studies suggest that not sleeping enough is just as damaging to our health as smoking, and that getting less than six hours could lead to medical issues and — even worse — shave years off your life span.

"People often say you can sleep when you're dead, and I say that's true, but you'll be dead a lot sooner if you don't sleep right now," said Lisa Meltzer, a doctor and associate professor of pediatrics at National Jewish Health. "The science is quite clear that insufficient sleep leads to a significant impact on all aspects of functioning." After all, research suggests that 24 hours without sleep is similar to being legally drunk.

The bad news: Fifty to seventy million Americans already suffer from sleep disorders. But the good news: We're not necessarily damned if we don’t get a full eight hours.

Here's what studies suggest about sleep — and what it means to get a decent night's rest.

Early bird or night owl? It really might depend on your genes.

Our bodies have "diurnal preferences," or "chronotypes," which basically mean that we are predisposed to a certain type of body clock. One study of more than 600 people between the age of 20 and 35 suggests that these preferences are influenced by our genetic makeup, for example, and Meltzer says that there's generally a scientific consensus around the idea that we have fixed chronotypes.

"People have a tendency to be a morning or evening type. Some people are very extreme on either ends, like they always wake up at 4 a.m. or others can't sleep until 2 a.m.," she said.

But what about people who prefer nights but have jobs at the crack of dawn?

"Maintaining a consistent sleep schedule is very critical to maintaining a normal rhythm that fits with the work or school schedule," she said. "Even on weekends, don't delay sleep by more than an hour and don't sleep until noon, either — because, come Monday morning, you will not wake up."

Changing sleep habits for just one night affects our bodies so much that she calls a late Saturday with friends "social jet lag."

Changing sleep habits for just one night affects our bodies so much that Meltzer calls a late Saturday with friends "social jet lag."

Newborn babies need as much as 17 hours of sleep a day, but most adults need significantly less. According to the National Sleep Foundation, people age 18 to 64 should get about seven to nine hours of sleep a night — just a third of our daily lives.

But when it comes to teenagers and adults, Meltzer said, there are specific needs. "When adolescents go through puberty, melatonin is delayed," and that effectively makes adolescents night owls. "It becomes difficult for [them] to fall asleep earlier, and this carries into the early 20s," she said.

This is why some groups are advocating for later school start times. In Boston, for example, a group recently petitioned to move the school day from 7:30 a.m. to 8:30 a.m.

"School start times are starting to change, but it's certainly not at the level of recognition it needs to be," Meltzer said.

The good news: You can hack your environment to get better sleep.

No matter how well we manage to grimace through our most sleep-deprived days, or how long we've already mastered going through life with the constant fray of feeling tired, there's no escaping a simple truth: Our bodies were designed for sleep.

"You have to eat, you have to drink, you have to breathe and you have to sleep. People think they can get by on less sleep, and they can — but it's going to catch up with them eventually," Meltzer said.

But when we find ourselves struggling to drift into dreams, the following tips can help us get through the night.

1. Don't drink or smoke before bed.

In the hours before we head to bed, be sure to avoid alcohol and cigarettes, which are thought to disrupt restorative REM sleep. It's true that one study suggests that women are more affected by drinks before bed than men, but it's generally not a good idea to sip a cocktail before bed, no matter who you are.

"Alcohol is a sedative and will make you sleepy, but it will also make it harder to get quality sleep," Meltzer said. She also recommends going completely cold-turkey and dropping cigarettes altogether, along with losing coffee around the middle of the day.

"Another standard recommendation is limiting caffeine use after lunch, since caffeine has a half-life of four to six hours," she said. On top of coffee, that includes several types of tea, energy drinks and sodas.

There are many tips on the internet for getting better sleep, but the most scientifically supported one is reducing our exposure to blue light by shutting off electronics at least a half-hour before bedtime.

In general, melatonin is a hormone that is released during darkness, so exposure to light at late-night hours can affect our body clocks.

Other theories are less supported, but perhaps worth a try. Keeping the temperature in our bedrooms cool, for instance, may make sleep more pleasant. Some recommend heating up our bodies with a shower a few hours before bed so that our bodies have to cool down afterward, signaling us to sleep.

Try whatever you'd like, but always remain some level of skepticism. Some studies also support using aroma therapy — particularly lavender — to aid our transition to sleep. Meltzer, however, isn't convinced that those kinds of solutions work. We just need to have the discipline to put our smartphones away and go to bed at a regular time, she said. That's what will transform American health and culture in the future.

"People have become more interested in sleep, and it has become a hot topic," she said. "But until [sleep] becomes a recognized pillar of health, the same way diet and exercise are, I don't see vast changes happening quickly."

This article was originally published on June 10, 2017