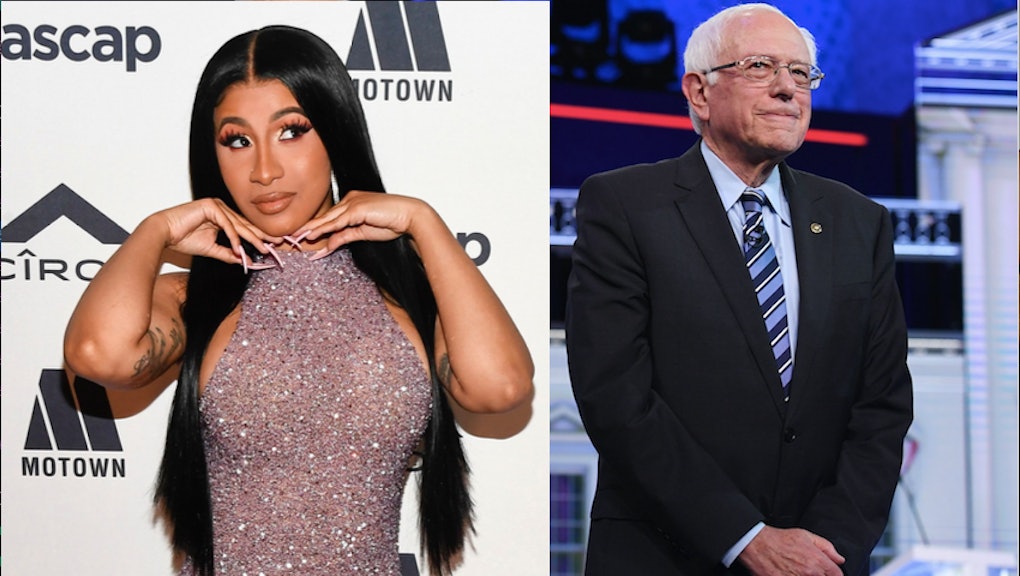 Cardi B supports Bernie Sanders in a tweet, but it's not the first time she's endorsed the politician

The Democratic primaries are in full swing, as 24 candidates race to earn public support before the 2020 election. And Senator Bernie Sanders just received a valuable shoutout from one of pop culture's biggest names. On Tuesday morning, rapper Cardi B tweeted out to her 6.4 million followers that she had been reading up on the Vermont senator, and she was compelled by what she had learned.

"I been reading about Bernie Sanders and I’m really sad how we let him down in 2016 This man been fighting for equal rights,HUMAN rights for such along time," Cardi B wrote on July 16. "Seeing this country become a better place been really his passion for a long time not a new front for a campaign."

This is far from the first time the musician has expressed interest in politics — it's not even the first time she's supported Sanders for president. In 2016, she posted a video telling people to get out and "vote for Daddy Bernie, bitch."

Back in 2017, after Hurricane Maria devastated Puerto Rico, Cardi condemned President Donald Trump for his inaction in the aid response, and reminded him that Puerto Rico is a part of the United States. The rapper has also repeatedly issued support for football player Colin Kaepernick, who has become a national face of protest against police brutality and who has been repeatedly attacked online by Trump.

Cardi has also gone on record saying that her favorite president is Franklin D. Roosevelt, telling GQ in 2018 that she admires the politician because of his work rebuilding the country after the Great Depression, and his role in creating America's social security program. At the time, Sanders even voiced his agreement with the star's assessment of Roosevelt.

Cardi's latest endorsement of Sanders didn't go unnoticed by the senator. On Instagram, he reposted her tweet, writing, "Thank you @iamcardib! Our fight for justice is far from over and we are not giving up."

Sanders is currently second in national polls ranking support for the 2020 candidates, coming behind former Vice President Joe Biden and ahead of Senator Elizabeth Warren. He is running on one of the most progressive platforms of the Democratic contenders, supporting Medicare For All, a federal minimum wage of $15 an hour, a higher tax on the wealthy, and the break up of banks like JP Morgan. He's also endorsed a version of Rep. Alexandria Ocasio-Cortez's Green New Deal.

After Cardi B tweeted about her interest in Sanders' platform, a follower criticized her endorsement, noting that she'd previously expressed frustration about paying high taxes and not knowing where the money was spent. But the rapper had a response ready. She told the Twitter user that it's not the taxes she has a problem with — it's the fact that her taxes aren't funding public services.

There are still several months until the voting for the 2020 primaries begins, and five more Democratic primary debates before the end of 2019. From now until next spring, plenty of candidates will be making their cases for why they should be elected president, and the public — including Cardi B — will be listening.

More like this
Mark Zuckerberg joins the ranks of rich dudes getting owned by a band
By Vanessa Taylor
Congrats to GOP Rep. Mo Brooks for tweeting his own passwords out to 100k followers
By Rafi Schwartz
The Biden administration just re-extended federal protections to trans students
By Rafi Schwartz
Stay up to date