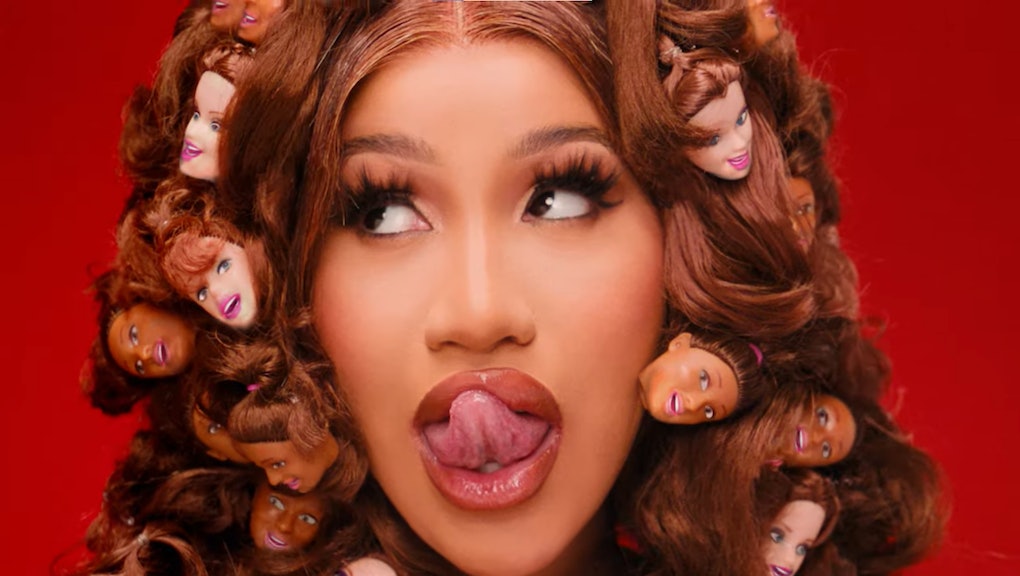 Cardi B's "Up" is the best music video since "WAP"

After another world-conquering year on the back of just one huge single, Cardi B has returned with its proper follow-up. Here she is again with “Up,” a marginally more family-friendly effort than “WAP” that still isn't going to be an easy task for the Kidz Bop staff to write around.

Cardi’s latest comes with the suitably glitzy, opulent music video treatment, and offers a dozen memorable images right from the jump. Right at the opening, she’s standing in front of a “RIP 2020” grave, with chandelier crystals dangling from her sleeves. Much like “WAP,” it cycles through a dizzying array of scenes: Cardi up in the clouds, Cardi with dozens of doll heads weaved into her hair, Cardi and four other women huddled in a clam shell, Cardi in a translucent skinsuit lying on some guy as a coffee table. She often feels like the only artist in music whose new music videos are events on their own, and this keeps it going.

Right when the song dropped, Apple Music released a new interview between Cardi and Zane Lowe. The beat, which is incredible and honestly more of an immediate earworm than “WAP,” was intended to draw from Cardi’s early interest in the Chicago drill scene. Never intent to water any of this down for the masses, she also talked about wanting to make a harder song that drifted from sexualized themes, while still tossing in a few lines like “He nutted on my butt. I said, ‘I'm glad that you came.’” (An easier task for radio censors than “wet and gushy,” nonetheless.)

She also tells Lowe that the album is slated to arrive sometime this year, after she’s finished poring over the "like 50 songs” already recorded for it. “I’m just still not satisfied. If I’m not satisfied, I’m just not satisfied, but I really want to put out an album this year," she said. "I feel like I have no choice now. Now, I feel like I exceeded my limit of holding. I just need to stop with the fear.” The conventions of time don’t seem to apply here — most high-profile rappers rarely take longer than two years between full-length releases, but Cardi’s operating in a pop stratosphere above anyone in the genre this side of Drake.

In the meantime, she’s kept busy, signing on for her first starring role in a film (Paramount’s Assisted Living,) and kicked off a micro-controversy about COVID testing during a commercial shoot. (I’d guess this was about her Uber Eats spot for the Super Bowl, yuck.) It’s hard to imagine the year passing without a new full-length from Cardi, and harder to imagine it being anything less than a massive success.