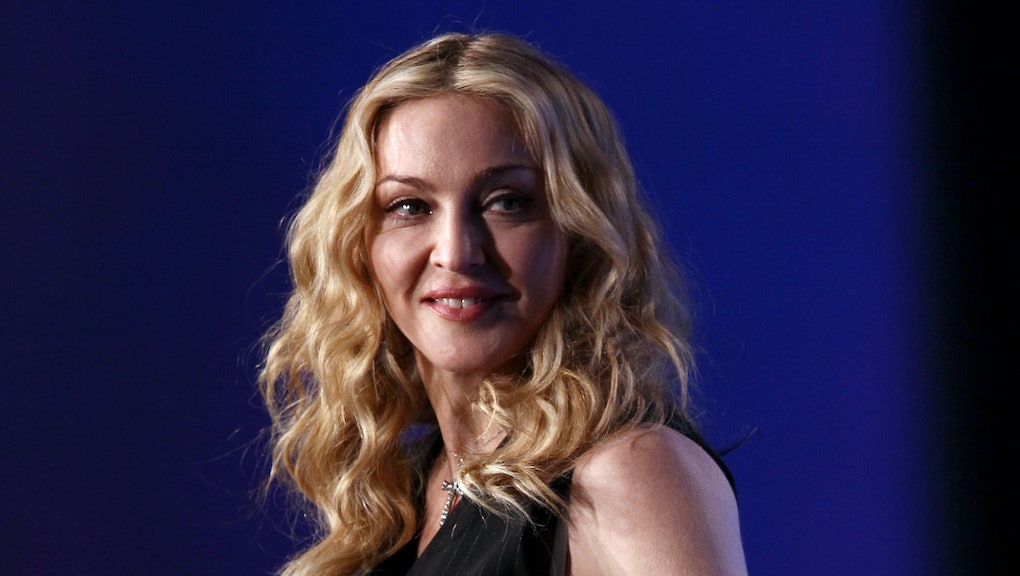 Almost as swiftly as the novel coronavirus wafted its way across the globe, false information about the crisis wormed its way onto timelines. You might not believe the craziest claims — covid-19 is, in fact, not spread through 5G — but there’s seemingly no end to the number of conspiracy theories, hoaxes, and bogus cures pinging around social media.

The covid-19 crock isn’t just being pushed from the fringes, it’s being shared by famous influential people who you’d hope would know better. Just this week, President Trump and his son, Donald Trump Jr., shared a viral video of Stella Immanuel, a doctor who spoke on the steps of the Supreme Court and claimed that neither masks nor shutdowns help fight the pandemic. Immanuel also repeated the unsubstantiated claim that hydroxychloroquine is a miracle cure for the virus.

As though the president of the United States sharing fake health information with his 84 million Twitter followers wasn’t damaging enough, Madonna entered the fray, sharing the same video of Immanuel with her 15 million followers on Instagram. In her caption, the Queen of Pop claimed, without evidence, that a vaccine for coronavirus has “been found and proven and has been available for months. They would rather let fear control the people and let the rich get richer and the poor get poorer and sick get sicker.”

Immanuel’s hogwash seeped across the internet, nevermind her history of making bizarre health claims, which also came to light on social media. Immanuel has alleged that alien DNA is used to make vaccines and that gynecological issues are caused by “demon sperm.” But over on Instagram, Madonna was calling Immanuel her “hero” and arguing that “some people don’t want to hear the truth.”

To Instagram’s credit, the platform responded to Madge’s falsehoods swiftly, blurring the video and labeling it “false information.” Madonna later deleted the post entirely. But before she did, singer Annie Lennox spoke for all of us by commenting: “This is utter madness!!! I can’t believe that you are endorsing this dangerous quackery. Hopefully your site has been hacked and you’re just about to explain it.”

The fact that Madonna bought into Immanuel’s falsehoods, echoing the Trumps in their baseless medical claims, exposes just how pervasive this kind of thinking is among people of all walks of life. Look at how quickly the 26-minute Plandemic documentary went viral in May. The slickly-produced video wrongly claimed that a massive cabal of elites was leveraging coronavirus to consolidate power. Conspiracy theories have only gained more traction online as the pandemic continues, which is terrifying.

People tend to view conspiracies as harmless entertainment. But it’s becoming increasingly clear that one of the reasons the first wave of the coronavirus pandemic has been so deadly in America is because healthcare professionals and scientists are waging a war against misinformation at the same time as they’re fighting the disease. The fact that these falsehoods are being pushed from the very top echelons of government and culture makes their mission far more difficult.

Social media has been an especially fertile breeding ground for coronavirus falsehoods, and the problem is pervasive across platforms. Early on in the pandemic, Snapchat and Instagram began disabling AR filters that claimed to diagnose the virus by scanning a user’s face. TikTok disabled QAnon hashtags in an effort to curb the spread of conspiracy theories. This spring, Facebook and Instagram announced they’d be vigilant in policing misleading health information. But how this has played out so far has been extremely messy. It’s good that Instagram moved to censor Madonna, but millions of people still saw the video of Immanuel before social media sites stepped in.

Now, with Russian hackers aiding coronavirus conspiracy theorists, amplifying and disseminating even more misinformation, policing these falsehoods becomes increasingly complex. It all-too-eerily resembles the “fake news” pandemic that plagued Facebook circa the 2016 presidential election. This time, instead of hackers trying to sway an US election, misinformed politicians and celebrities are messing with American lives.

Facebook could continue its scattershot response to coronavirus conspiracy posts, censoring individual examples of egregious abuses of free speech by celebrities, but we're at a point where that simply isn't enough. Social media is just as good a tool for sharing nonsense as it is for disseminating valuable information — quickly.

Mark Zuckerberg and his compatriots have in effect become the de-facto moral police, but it doesn't serve their business interests to silence their most influential and prolific users. Which means social media, and all the toxic lies that thrive and multiply there, will continue rotting our brains with its sugary decay. Stopping the cycle means being a good enough internet sleuth to spot the difference between reliable news sources and somebody peddling crap. And if the Madonna saga is any indication, it's harder for people to tell the difference than you might expect.

More like this
QAnon queen Marjorie Taylor Greene got suspended from Twitter for spreading coronavirus misinformation
By AJ Dellinger
This restaurant's viral anti-vax stance is a sad, predictable sign of our culture wars
By Brandon Yu
Dua Lipa has officially distanced herself from DaBaby
By Kara Weisenstein
Stay up to date