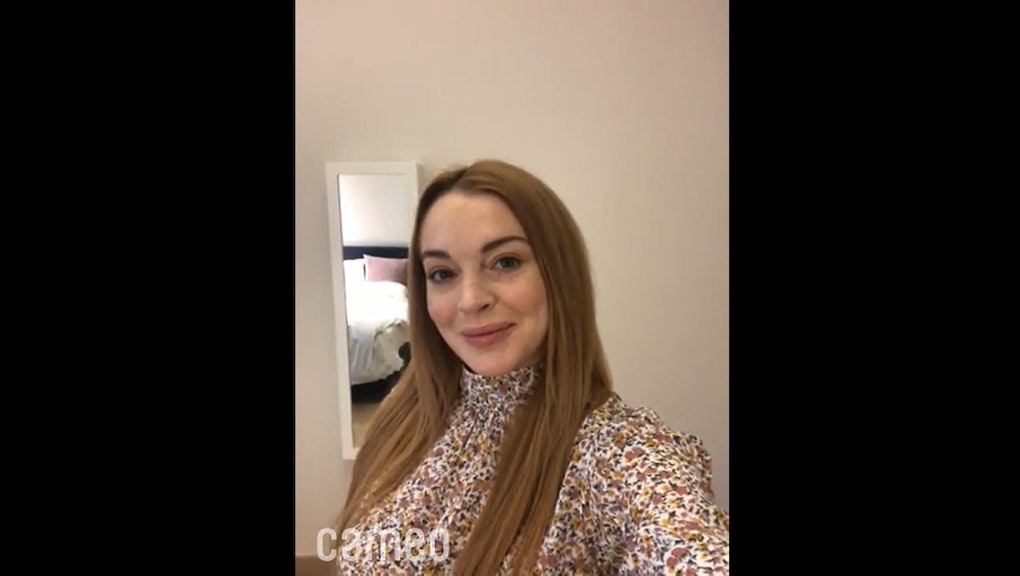 Celebrity shoutout app Cameo has gotten even weirder under quarantine

The coronavirus outbreak has impacted every aspect of daily life, with industries screeching to a halt in an effort to save thousands of lives. Naturally, things have gotten a bit strange during this time of upheaval. Stir-crazy celebrities have been posting bizarre glimpses into their homes, which are decidedly not like the rest of ours. So what role does a service like Cameo, which allows you to order personalized videos from marginally famous people, serve in this moment of free and unsolicited voyeurism?

In the before times, Cameo was a weird novelty gift for the routine birthday, anniversary, or prank order. Mark McGrath participated in what was likely the most viral Cameo up to that point, serving as the messenger for a breakup (sadly, it wasn’t actually real.) Since those things still occur under quarantine, there’s no change in much of the content, but a new sub-genre has emerged in the aftermath of coronavirus. It’s beginning to function something like a personalized “Imagine” video for B- and C-list celebrities — you just have to pay them anywhere between $30 and $200 for their time.

Coronavirus anxieties are seeping into the more routine Cameo videos, with celebrities carefully nudging recipients to stay inside — or in the case of Anthony Scaramucci, he just isn’t recording from the passenger seat of a moving vehicle anymore. While he’s staying put inside, and telling people “the virus is way worse than people think,” tacked onto a mundane birthday video, he reflects a rising interest in videos tailored specifically to COVID-19. In one recent video The Mooch tells the students of a law school dean that their classes have moved online — a $100 job instead of sending a mass email.

Jim O’Heir, one of Cameo’s many sitcom supporting cast members, was the first coronavirus consolation video I encountered out in the wild. He’s usually a calming presence, dishing out around three minutes for a thorough birthday wish and sheepish explanation of who he is. But now, I’ve noticed him offering words of encouragement to those who are worried about the pandemic — and in one case, serving as a consolation gift for a canceled vacation.

At a significantly lower value for the time purchased, Lindsay Lohan is offering similar reassurance. Most of her videos clock in anywhere between 10 and 40 seconds — only a glimpse of Cameo’s splashiest recent addition who’s charging $250 per clip. In one of the latest videos, she’s solely focused on the coronavirus outbreak and how turning to faith will rescue us all from its wrath. “Obviously this is a sign coming from god that we need to reevaluate everything in life and really slow down for a minute,” she tells one recipient named Teresa.

Dolph Lundgren, who is also new to the platform, has just a few videos available for public viewing. The first finds him in character as Rocky villain Ivan Drago, encouraging a doctor who has ostensibly contracted coronavirus, or is at the very least on the front lines combating it in hospitals. “If Rocky Balboa can beat me, then you can beat coronavirus,” he says. It’s one of the bleakest uses of Cameo I’ve encountered to date.

Things had already been getting stranger on the platform in the past month, when disgraced former Illinois Governor Rod Blagojevich joined Cameo with a $100 price tag per video. Sadly they’re all private at this moment, so there’s no way of knowing who’s buying these things or if they match the unnerving tone of his post-pardon press conference. Creed frontman Scott Stapp also joined recently, paired with a striking $500 price tag that would be hard to justify in any year after 2003. You imagine many of these stars might discount their rates as this outbreak wears on and demand dips, but they’re in no hurry to do so just yet.

Obviously a service like Cameo will shapeshift in the event of a pandemic and economic downturn, but I still wasn’t quite prepared for the conciliatory tone it’s taken on for some of its biggest users. Just in the second week of quarantine, things have already become weird in previously unforeseen ways, so there’s no use in trying to guess where it might go from here.

More like this
Steve from 'Blue's Clues' gave us the closure we didn't know we needed
By Kara Weisenstein
The 8 best reality shows you're not watching, but should be
By Brandon Yu
Lil Nas X delivered his baby, 'Montero,' along with an ill-fated love story
By Kara Weisenstein
Stay up to date