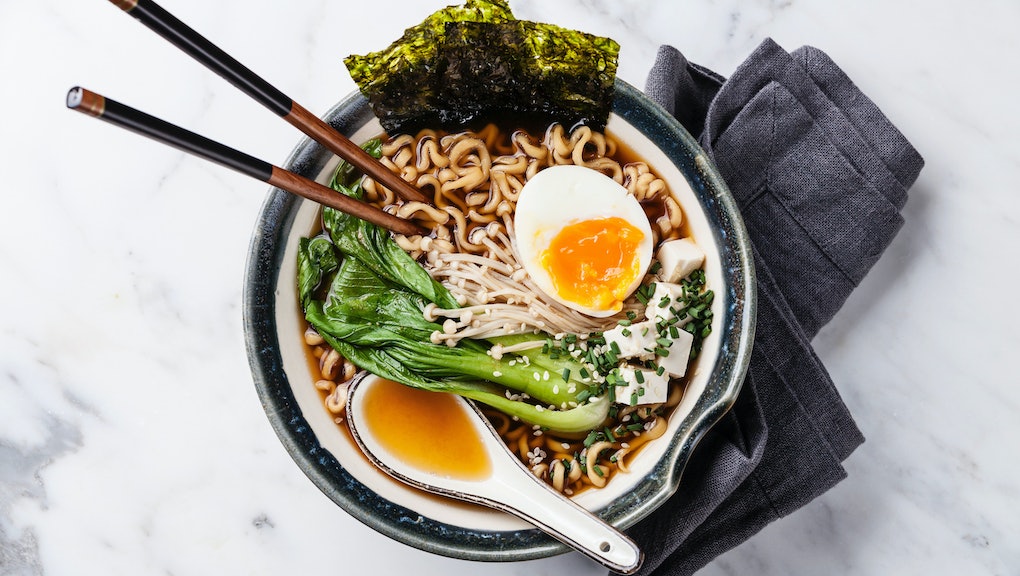 Chefs tell us what they make themselves when they're hungover

First came Dry January, then wet February, then March, when a pandemic sucker-punched us in the gut. The first few months of this particular year have been unimpeachably glum. The weather’s still stubbornly grey in the Northeast, everyone’s trying to navigate stay-at-home orders responsibly without losing their shit. So, we’re drinking like it’s spring break — and some of us are getting spring break-like hangovers.

No one's trying to wake up on a random Tuesday morning feeling like they’re buried under a pile of stone. But sobriety (and for some, moderation) is a little tedious, given the circumstances. And while there’s no cure for a hangover — seriously, don’t believe the articles that say that there are — Mic caught up with chefs across the country for recipe inspiration for the pukey and the headache-afflicted. Here’s what these gourmands whip up in order to conquer their hangovers and feel like themselves again.

“I start with green tea for energy and hydration. Then, I make a bowl of ramen noodles that basically mixes whatever I can find and throw in. It could be leftovers, or it could be mushroom stock, just doctored up. Ramen noodles are the go-to college thing. Now, I throw in some extra fancy stuff, like bok choy, or mushrooms, things of that nature to make it into a meal but still kind of comforting.

In my fridge, there might be leftover raw onions that I’ll cut up and throw in there, mushrooms that I might have, like green bell peppers, some kind of cabbage. Let it get cooked in the pan, throw it in the water, throw in the instant package mix, throw in the noodles. You gotta have a full breakfast or lunch or whatever stage you’re at at that point.”

“Drink two glasses of water before going to bed. When I wake up, I have a cup of coffee and prepare a nice heavy breakfast. I love baked beans on toast with two sunny side up eggs and an avocado dressed in lemon juice and olive oil . Sometimes the hangover lasts longer, in which case I will have a burger with fries and a pint of beer. Sometimes you need a lot of carbs and hair of the dog to really get back on your feet.”

“There is nothing like a nice warm soup to coat your stomach after a night of debauchery and drinking. Not only does this homey soup coat your stomach, the spicy taste of the kimchee and gochujang make you sweat out any toxins you took in the night before. Head to your nearest Asian market, purchase these ingredients and keep them at home because you will never know when you need this delicious cure to help you forget all of last night's bad decisions."

“To cure a hangover, some people eat pizza; some people eat noodles. I like to make fried rice. You can layer fried rice with whatever kind of protein you want. I normally do fried rice with really salty bacon in it that I have in my fridge. It's simple. And then you have your veggies, garlic, ginger. I always have a nice bag of frozen vegetables, so I throw that in there with soy sauce and chili, and then I throw my bacon in and it comes together in a nice warm bowl.

If I feel really good, I'll throw an egg on top. Hangover cures are comfort food. Foods for hangovers truly are things that make us feel comfortable and get us through that moment from last night when we shouldn’t have had that drink, or we shouldn’t have taken that shot.”

“So, in my family, we do Christmas Eve together. It’s a big extended family thing and everyone stays over, and the next day there are definitely people hungover. There's a soup that we make with bone marrow, and vegetables. So it's a nice, brothy thing. You need that broth, and then the vegetables in it ensure that you're getting something healthy in you. You’re using the bone marrow to flavor the broth, it’s salty and savory, and you add the fresh elements right at the end, and it's hot, right? So it's just real nice to have the next day. The fresh elements make it so that you're getting good nutritious stuff in it, but at the same time you're eating something really hearty.”

More like this
Should I wear sunscreen indoors?
By Caroline Shannon-Karasik
If we get vegan bacon right, we can save humanity
By Tracey Anne Duncan
Wanting to start a family motivated us to pay off $126K in a year
By Marianne Eloise
Stay up to date