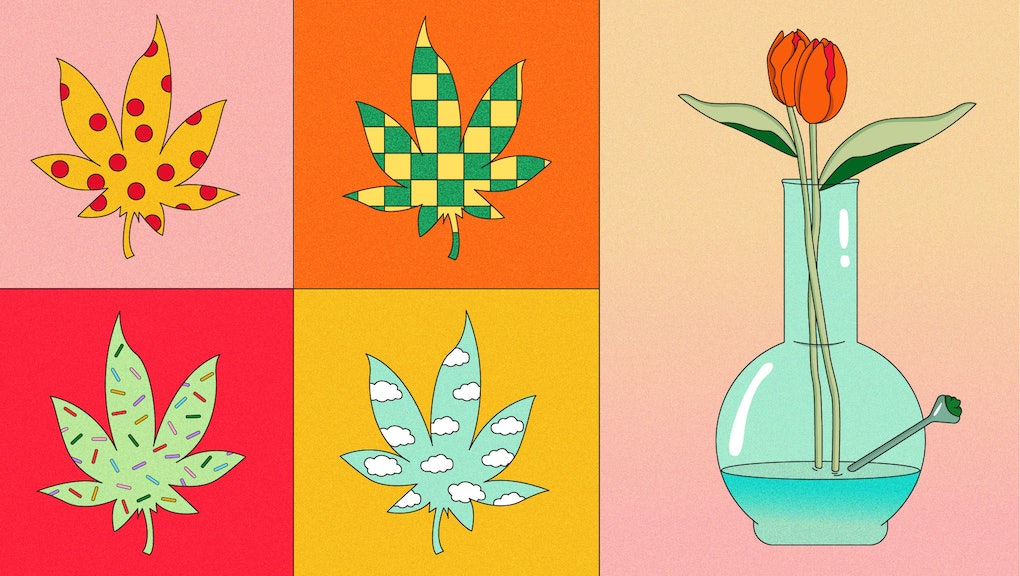 Choosing the right weed strain for your vibe

For me, at least, cannabis strains and their purported effects have the same appeal as BuzzFeed personality quizzes. Tell your budtender the vibe you want to achieve, and they'll suggest a strain, or a few. If you want to hike or deep clean your apartment, they might recommend a strain that gives you an uplifting, cerebral high. But if binge-watching The Falcon and the Winter Soldier is the only item on your agenda, they might point you to something that yields a more chill body high.

As is often the case with cannabis, though, this concept is based partly on science — but partly on marketing, too. In other words, before we recommend some strains based on what you have planned for today, we need to get some caveats out of the way.

First of all, what exactly is a strain? “Just like with all plants, [strains are] essentially cultivars,” not unlike how Galas, Fujis, and Granny Smiths are apple cultivars, explains Lewis Nelson, chair of the department of emergency medicine and chief of the division of medical toxicology at Rutgers New Jersey Medical School. They're the result of breeding two different variants of cannabis.

So what does it mean for a strain to be sativa- or indica-dominant, or a 50/50 hybrid of sativa and indica? Sativa and indica refer to different species in the Cannabis genus, Nelson tells Mic. He explains that they look similar, but contain different percentages of tetrahydrocannabinol (THC) — the compound that gets you lit — and cannabidiol (CBD) — the compound that supposedly chills you out. Indicas and sativas have been bred to create different strains, “so no longer are you buying sativa or indica, you’re buying some combination of the two in varying proportions,” he says.

He notes that “historically, sativa has always been a high THC species, whereas indica has always been a high CBD species.” THC tends to be more activating, he adds, which is why you often notice sativa-dominant strains marketed as “energizing.” Meanwhile, CBD is considered mellowing and reflective, hence why you might see indica-dominant strains described as "relaxing."

Yet there’s some debate over whether a strain marketed as, say 40% sativa and 60% indica, reflects actual genetic differences, as VICE reported. Nelson agrees. “It’s an impure definition,” he says. Instead, “we should probably be classifying it by... what percentage and what quantity of THC and CBD are present.”

Even then, it gets a little murky, because whether the ratio of THC to CBD influences weed’s physiological effects hasn’t been formally studied, Nelson points out. And he adds that if you ask people to compare two strains that contain around the same quantity and composition of THC and CBD, chances are, they wouldn't be able to tell the difference between them, similar to how most people can’t distinguish between two good wines. Still, it’s “a place to start,” he says.

He believes the quantity of THC a strain contains is the probably the best indicator of how it’ll make you feel. On the other hand, he acknowledges that having a plethora of strains to choose from makes for a more fun shopping experience.

Basically, treat matching your strain to your vibe as a playful art rather than a strict science. Here are some strains to imbibe based on your goals, according to Graham Farrar, President and Board Member of cannabis and hemp company Glass House Group.

If your goal is to…

Sink into the sofa

“Strains that are either indica or indica-dominant would be where you’d want to look for your couch cruising,” Farrar says. Think Gorilla Glue strains, like Original Glue or Sister Glue, as well as Cookies strains, like Girl Scout Cookies or Cookies and Cream. He also suggests strains high in CBD. If you’re looking to nap, he recommends strains high in a compound known as cannabinol (CBN), which has personally helped him sleep (although Mashable notes that evidence of its somnolent properties remains scant).

On the flip side, if you want to cross laundry, paying your bills, and other Adulting Tasks off your to-do list, Farrar suggests sativa-dominant strains, like Sour Diesel, which tend to contain more THC and feel more energetic and uplifting. “Sour Diesel is one of the ones that makes you want to get stuff done,” he says.

He also suggests strains high in the compound tetrahydrocannabivarin (THCV), which he says some have described as “Adderall weed” for its invigorating effects, although there doesn’t seem to be enough evidence for its purported effects at this point, as I’ve written in a previous story for Mic.

Get out of a creative rut

The aptly named Flo White, a sativa-dominant hybrid, could help you hit that elusive creative flow state. Farrar explains that it has a high enough THC level to bump you out of your habitual way of thinking, but not so hard that “you’re not putting the pieces together.”

That said, cannabis may or may not enhance your creativity, depending on various factors, as I’ve previously reported for Mic. Still, it’s worth a try.

If you need help finding your chill, Farrar suggests a high CBD tincture, like Glass House Wellness, made from the company’s Jelly Fish strain, which he says contains “just enough THC to help the CBD do its work.” A tincture allows you more control over the dose you take, he explains.

While Nelson says that CBD does seem to be more calming, it’s important to note that, as VICE reported, researchers are still ironing out the details of weed’s effects on anxiety. Too much THC could also send you spiraling into paranoia (a lesson I've learned the hard way).

Like Nelson, Farrar points out that much of this is subjective. “There’s some level of experimentation,” he tells Mic. “You can get pointed in the right direction, but it’s going to come down to a strain and a person, how they interact together, and if that’s giving you what you want. There’s not a one-size-fits-all.” Landing on your go-to sink-into-the-sofa strain may take some trial and error, but that’s part of what makes it fun.

This article was originally published on April 21, 2021

More like this
How to embrace body acceptance without being ableist
By Melissa Pandika
TikTokers are demystifying ADHD with truth and just enough levity
By Joseph Lamour
Castor oil for hair growth: Does it actually work?
By Melissa Pandika
Stay up to date