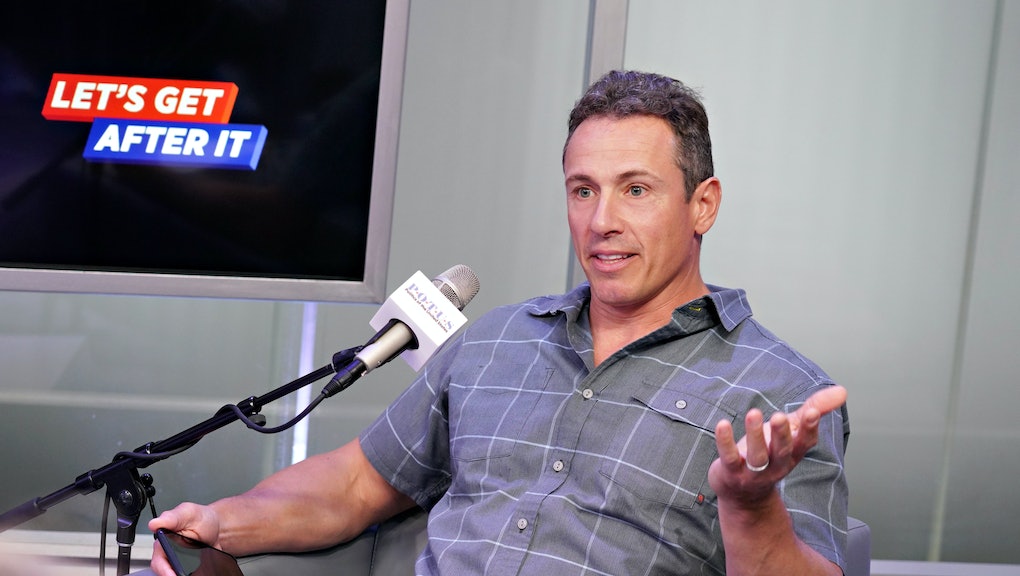 Chris Cuomo says he'd rather be a "regular Joe"

Poor Chris Cuomo. The TV personality and younger brother of New York Governor Andrew Cuomo has been really going through it these past few weeks. And no, I’m not talking about the siblings’ on-air bickering. Chris Cuomo was diagnosed with COVID-19 a couple weeks ago, and he’s been stuck in his basement ever since, giving dispatches to CNN viewers on his persistent low-grade fever and the psychological toll of being locked away in quarantine.

On Monday, Cuomo seemed to snap a little bit, saying coronavirus has made him question his purpose in life. Spoiler alert: being a CNN anchor is not fulfilling his deepest wishes and dreams.

“I’m basically being perceived as successful in a system that I don’t value,” he continued. “I’m seen as being good at being on TV and advocating for different positions.”

Though the millions he makes for lookin’ pretty on camera sure do sound nice, Chris is over it! He wants to do something meaningful with his life, and propping up hollow politicians just ain’t it.

“I don’t want to spend my time doing things that I don’t think are valuable enough to me personally,” Cuomo said. “I don’t value indulging irrationality, hyper-partisanship.”

Interestingly, the incident that seems to have precipitated Cuomo’s tirade had little to do with his job at CNN. On Easter, Chris was outside his house with his family, when a biker rode by and berated the well-known figure for violating quarantine despite his diagnosis. (Cuomo said his family had taken precautions and were observing six-foot social distancing guidelines.)

“I don’t want some jackass, loser, fat tire biker being able to pull over and get in my space and talk bullshit to me. I don’t want to hear it,” Cuomo said on his radio show. He lamented not being free to tell the busybody to “go to hell.”

“That matters to me more than making millions of dollars a year […] because I’ve saved my money and I don’t need it anymore,” he said. “I am in an almost powerless position against this ass because I’m a celebrity and he’s allowed to say whatever he wants to me,” Chris added.

Sir, I hate to be the one to break it to you, but quitting your cushy job at CNN won’t make you a “regular Joe.” For those not in-the-know, Chris and Andrew’s late father was also the Governor of New York. They’re a famous political family, like it or not.

But if Chris is looking to unload his hosting gig and/or a few of those millions, I know a writer who’d gladly take over for him. 🙋🏻‍♀️ Better yet, I can think of a lot of regular folks and medical institutions in New York City who’d make great use of those millions, you know, just to make ends meet. Food for thought, Chris.

Update: Chris Cuomo has since clarified his comments, saying that he “never meant” to insinuate that he had any issue with his work CNN anchor.

More like this
Live from New York: Revisiting the totally bonkers era of post-9/11 'SNL'
By Rafi Schwartz
If "Today Is America" then what the hell is tomorrow?
By Rafi Schwartz
There are QAnon NFTs now, because one grift deserves another
By AJ Dellinger
Stay up to date