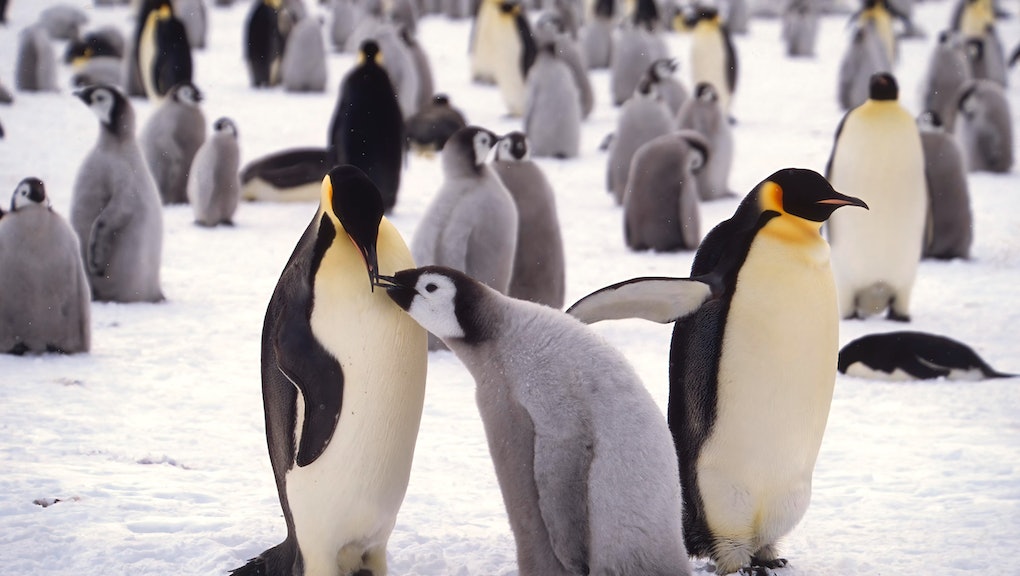 Scientists have already warned that, left unchecked, climate change is likely to wipe out as many as one million species of plants and animals that currently call Earth home. Now, you can add the Emperor penguin to that list. According to a study published Tuesday in the journal Global Change Biology, the beloved little waddlers are expected to be pushed to the brink of complete extinction by the end of this century.

Emperor penguins, the largest species in the Spheniscidae family, live almost exclusively in Antarctica; and according to research conducted last year by the British Antarctic Survey, there are believed to be nearly 280,000 breeding pairs of these birds. While that's more than was previously thought to exist, any optimism about the future for these flightless creatures has been short-lived. According to the new research paper, 98% of Emperor penguins will be gone by the year 2100 — and nearly two-thirds will be wiped from the Earth by 2050.

That's right: If nothing changes, scientists warn, Emperor penguins will be doomed to quasi-extinct status by the turn of the new century. Short of being wiped out completely, it's about the saddest spot for a species to be. Quasi-extinction means that extinction is considered inevitable, even if there are members of the species still alive. In this state, there aren't enough pairs to reproduce at a rate that would revitalize the species, so it's simply a matter of time before they're gone forever.

The reason for the likely decline of the Emperor penguin is pretty simple: Climate change is destroying its kingdom. The penguins prefer to breed on sea ice, ice shelves, and islands in the Antarctic, typically during the winter months; these spots typically provide the birds protection from predators during their breeding season. The problem, though, is that the ice is rapidly shrinking in the region. Last year, scientists found that ice in Antarctica is currently melting at a rate six times faster than it was in the 1990s, and researchers have warned that the frozen mass around the South Pole could be much more vulnerable to the planet's warming temperatures than previously thought.

As that ice disappears, the penguin population loses its safe spots to reproduce — meaning it's expected to take a considerable hit. This happens in particularly devastating ways. As the penguins breed in areas where the ice is less stable than it once was, their chicks suffer. Hunting for food becomes more challenging as ice melting pushes food sources farther away from the colonies, resulting in some chicks starving to death. If the ice breaks up sooner than expected, chicks can fall through the cracks and drown, because they're not yet ready to swim. Researchers estimated that more than 10,000 baby penguins are believed to have died this way already.

Such devastating outcomes await other frozen tundra occupants, too. Last year, researchers predicted a similarly brutal future for polar bears across the planet, that are seeing the areas they typically occupy become increasingly untenable long-term homes. With shrinking ice availability and dwindling food resources, experts warned that the bears will disappear by 2100, with most dying of starvation.

These fates are the unpleasant reality for many species that will fall victim to climate change. Extinction does not come quietly or gently; it is brutal, painful, and slow. But it also doesn't have to be inevitable. By taking clear action to address the climate crisis and shrinking our global emissions, we can avoid further burdening species with these catastrophic outcomes. And it's worth remembering that it won't just be the penguins that feel this pain — climate change devastation will come for us, too.