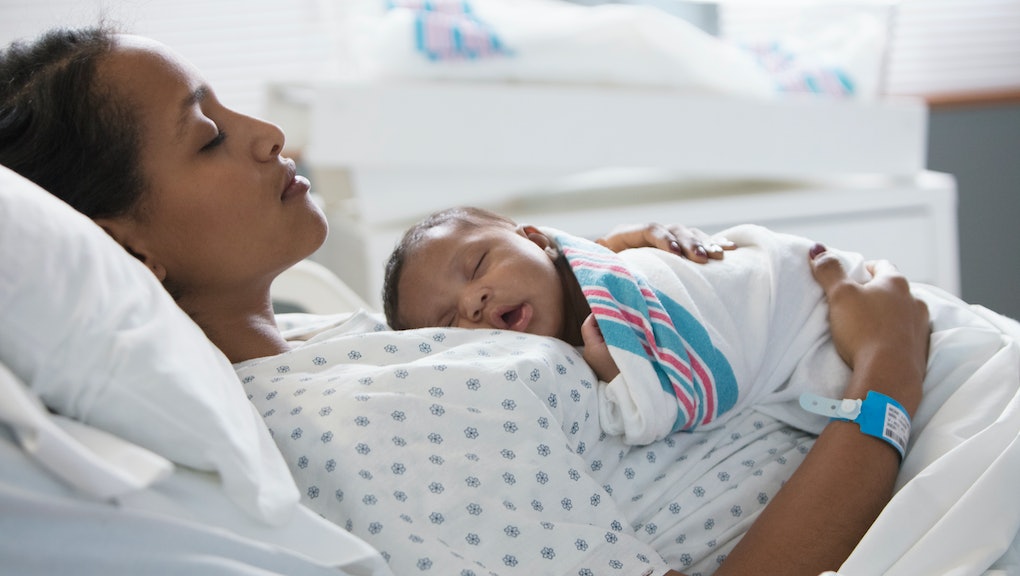 Amid a coronavirus pandemic and police violence, both of which are taking a disproportionate toll on Black Americans, new research offers yet another reminder of systemic racism’s devastating health consequences. An analysis of studies collectively examining nearly 33 million births found that air pollution and higher temperatures were associated with an elevated risk of premature birth, low birth weight, and stillbirth in pregnant women, the New York Times reports. Black mothers and babies were especially susceptible.

The findings appeared in the journal JAMA Network Open on Thursday, the Times reports, bolstering existing evidence that climate change damages newborn health, and that BIPOC bear the brunt of its harms. Indeed, a 2019 study found that while air pollution is generated primarily by white Americans, Black and Latinx Americans are disproportionately exposed to it.

Black women have a two- to threefold higher risk of pregnancy-related death than white women, according to the Centers for Disease Control and Prevention. Air pollution and warmer temperatures only worsen their already poor pregnancy outcomes, Rupa Basu, a co-author of the analysis, and chief of the air and climate epidemiological section for the Office of Environmental Health Hazard Assessment in California, told the Times.

Basu and colleagues dove into 57 studies published from January 2007 through April 2019 that had connected air pollution or heat to birth outcomes in the U.S., per the Times. Of the studies included in their analysis, which looked at 32.8 million births in total, four studies found that high temperatures were associated with an 8.6% to 21% greater risk of premature birth.

Two studies also correlated higher temperatures with stillbirths. They found that women of color were at higher risk, and had worse outcomes.

The studies on air pollution and pregnancy outcomes zeroed in on small particles known as PM 2.5, as well as ozone, a.k.a., smog, both of which are rising in prevalence with climate change, the Times reports. A whopping 84% of these studies showed a strong relationship between both types of pollution and low birth weight, premature birth, and stillbirth.

In a particularly disturbing finding from one study, the risk of stillbirth jumped 42% in women with high exposure to air pollution in their third trimester, per the Times. Black women had the highest risk of premature birth and low birth weight linked to air pollution

The effects of premature birth and low birth weight can ripple outward into adulthood, “[setting] the stage for an entire generation,” Nathaniel DeNicola, a co-author of the analysis and an assistant professor of obstetrics and gynecology at George Washington University’s School of Medicine and Health Sciences, told the Times. Both of these adverse birth outcomes can shape cognitive development and even disease risk years later.

Narrowing these disparities requires not only tightening environmental regulations, but a wholesale dismantling of structural racism through increasing Black Americans’ access to healthy food, green space, and health insurance, for instance, Adrienne Hollis, senior climate justice and health scientist for the Union of Concerned Scientists, told the Times. The problem doesn’t lie in any one policy, but in a system of white supremacy that devalues Black Americans’ health and lives.