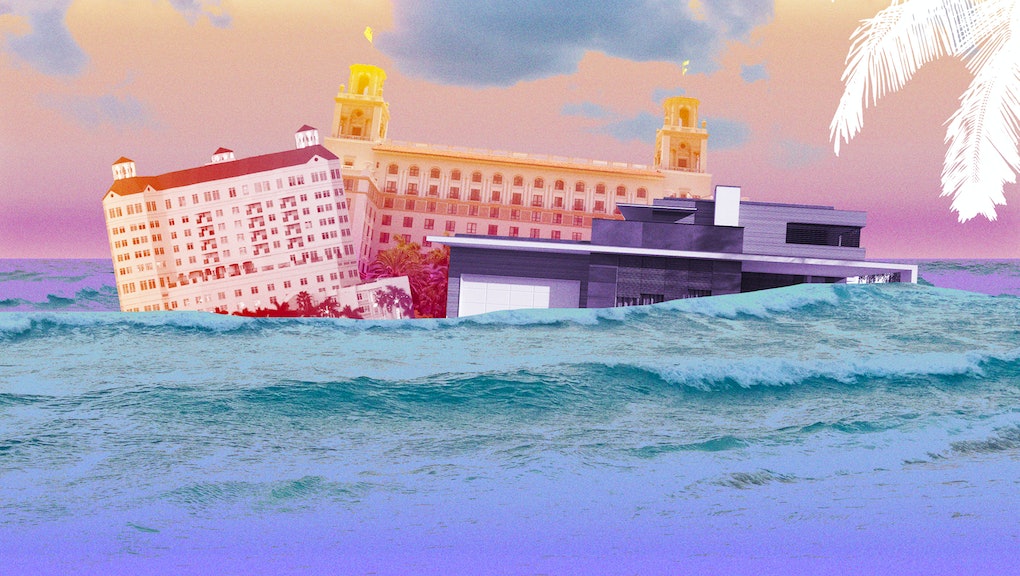 Climate change is ravaging Florida. So why is everyone buying homes there?

Last month, the deadly collapse of a 12-story beachfront condominium complex in Surfside, Florida, was a warning sign for anyone living in coastal Florida or looking to move there. The Surfside disaster, which cost nearly 100 lives, revealed the risks for housing in a state with no income tax, a rapidly-growing population, and a corrosive climate of salt air and rising water. The 2020 census found that Florida was one of the ten fastest-growing states by population over the last decade. According to state government estimates, Florida is expecting to add as many as 900 new residents per day through 2025.

Demand for housing in coastal Florida can lead residents to overlook risks exacerbated by extreme weather brought on by climate change. Like much of America’s neglected infrastructure, the bill was just too high to fix the 40-year-old Champlain Towers South condo after an alarming 2018 engineering report — residents faced assessments ranging from $80,000 to $200,000, slowing down much-needed repair. In 2017 and 2018, Hurricanes Irma and Michael led to numerous high-payout insurance claims in Florida. “Many insurers started dropping customers in high-risk areas and are refusing to take on new ones,” explains the New York Times in a recent article about the effects the Surfside disaster could have on housing in the area. “In some parts of the state, it has become all but impossible for homeowners to buy private insurance.”

But the Florida housing market appears to be looking the other way. Mansions in Palm Beach are flying off the market. According to the Wall Street Journal, at least 22 homes in the city have sold for more than $40 million in the last 18 months. In Jacksonville, houses sell at nearly a 20% premium, leaving lower-income home shoppers priced out of the market. In Orlando, buyers are driving around neighborhoods and asking homeowners if they are planning on selling soon to preempt other bidders. Central Florida is running out of homes to sell as multi-million dollar bidding wars have broken out, with many sales being made entirely in cash.

Since the start of the coronavirus pandemic, Florida has become a hotbed not just for the disease itself, thanks to the hands-off leadership of Gov. Ron DeSantis, but for the human vectors who spread it. According to data collected by Move.org, more than 330,000 people have pulled up stakes and moved to Florida since the start of the pandemic. The state has become one of the most popular destinations in the country, per trends tracked by U-Haul.

Mansions in Palm Beach are flying off the market. At least 22 homes in the city have sold for more than $40 million in the last 18 months.

The housing market is out of control for a confluence of reasons: millennials are ready to move into homes, mortgage rates are at the lowest levels in history, boomers are staying put, and a lack of supplies in the wake of the coronavirus pandemic has severely slowed construction. As a result, supply is getting outpaced by demand — and Florida is in serious demand.

There’s short-term thinking to all of this, and not just because there’s a real risk the housing market will burst (again) sometime soon. Climate change threatens Florida’s Atlantic coastline, where Miami, Palm Beach, Daytona, and Jacksonville are located; these cities are all among those that are most likely to be affected by climate change. As the planet warms, glacial ice melts, and tides rise, coastal cities will see ocean water start to push inland, drowning beaches and putting beachfront property underwater. Sea levels along Florida’s coast are already eight inches higher than they were just 50 years ago and continue to climb at an additional inch rate every three years. Nearly three million properties in Florida are at risk of flooding, according to data from FloodIQ, and an additional 500,000 will find themselves in flood zones by 2050.

But climate risk hasn’t stopped homebuyers from snatching up properties as quickly as they come available. “I anticipate climate change will become more of a discussion in the coming years,” Taylor Conley, a real estate agent who recently moved from Miami to Orlando, tells Mic. “I’m surprised there hasn’t been more worry yet around climate change’s effect on the Florida real estate market.” Even real estate companies have started to account for the added risks to property that the climate crisis is causing. Redfin has begun to rate house listings based on risk from extreme weather so that homebuyers know what they may be facing over the life of their mortgage.

But climate change is not on the minds of Florida home buyers just yet. “We’ve seen the cost of insurance slowly creeping up with hurricane season progressively worsening each year due to climate change. Home Owner Association fees will likely significantly increase in tandem with the rising cost of insurance,” explains Bowie Oliveira, a real estate agent in Miami. “That said, buyers don’t really mind. They’re familiar with the market and know what comes with it and are willing to pay the higher prices.” Oliveira said rising insurance prices might affect the market long-term, “but for right now, buyers are still snatching up houses left and right, willing to pay any cost.”

Part of the reason climate change hasn’t factored into the equation yet has to do with Florida’s lax approach to governance on these issues. The state’s largely hands-off approach came to light following the collapse of the Surfside condo complex. The 1982 building was about to experience its first mandatory safety recertification process, which is only required 40 years after initial construction, and once a decade after that.

While cities and municipalities can set stricter rules, the state government, led by Gov. DeSantis, appears to be more invested in protecting corporations than citizens. Earlier this year, DeSantis signed into law a bill that makes it harder for consumers to make insurance claims for roofing damage. “The goal is for consumers to make fewer claims, which reduces the losses the insurers take on in the state, where it’s notoriously difficult to price potential property losses,” explains Andrew Hurst, an Insurance Data Analyst at insurance research firm ValuePenguin. Several insurers have also recently received approval to drop or not renew home insurance coverage for more than 50,000 homes across the state. The change, which allows for firms to cancel policies with as little as 45 days notice, will leave thousands of residents without coverage, just as hurricane season approaches.

Florida’s insurance market has experienced massive losses in recent years as natural disasters have taken their toll on properties across the state. But laws that help insurance companies can leave homeowners more vulnerable, holding policies that offer less protection when disaster strikes — and sometimes leaving residents without coverage at all. While many mortgage lenders require homeowners to have insurance and flood insurance in the most at-risk areas, coverage is not always so straightforward. “Our researchers have found that about one-third of owner-occupied properties in Florida have flood insurance,” Hurst explains. “If a household’s income is low and their home isn’t located in a high-risk area, it’s plausible that the family would forego full the extra cost of insurance protection.”

Hurst says that recent survey data collected by ValuePenguin found that 41% of homeowners in hurricane-prone areas across the country have gone into debt because of costs associated with the risk and damage done by storms. Nearly one-in-three people who live in areas at risk of getting hit by hurricanes said they are not financially prepared for the 2021 storm season. “If a homeowner must be exposed to potentially spending money they don’t have to recover after a storm, they will go without or will be forced to move after a loss to avoid taking on debt,” Hurst explains.

As the risk of climate change continues to rise, and insurers price in the expected damage that increasingly extreme storms and weather will bring, the cost of insurance will rise as well. “A lot of people see climate change as a far-off threat, but it is happening now and is beginning to show its consequences on Florida’s housing and insurance market,” says Landy Liu, General Manager of Insurance Products at Better Mortgage. “Expect prices to climb even higher within the next year.”

When the cost of homeownership rises, it’s lower- and middle-class people who are hurt the most. Those that are already priced out of the housing market are pushed into rental situations where they are often more burdened by housing costs. The rich and upper-class will continue to buy up available housing and pay the growing insurance costs; there’s also the opportunity to get that money back by renting out the properties, often to the very people who would otherwise try to purchase a home.

Meanwhile, those who are lucky enough to buy a home are hampered with growing expenses and the risk of losing everything to dangerous storms, all while getting priced out of adequate protection and insurance. In Florida, and increasingly across the country, homeownership, once the American dream, is now a nightmare.