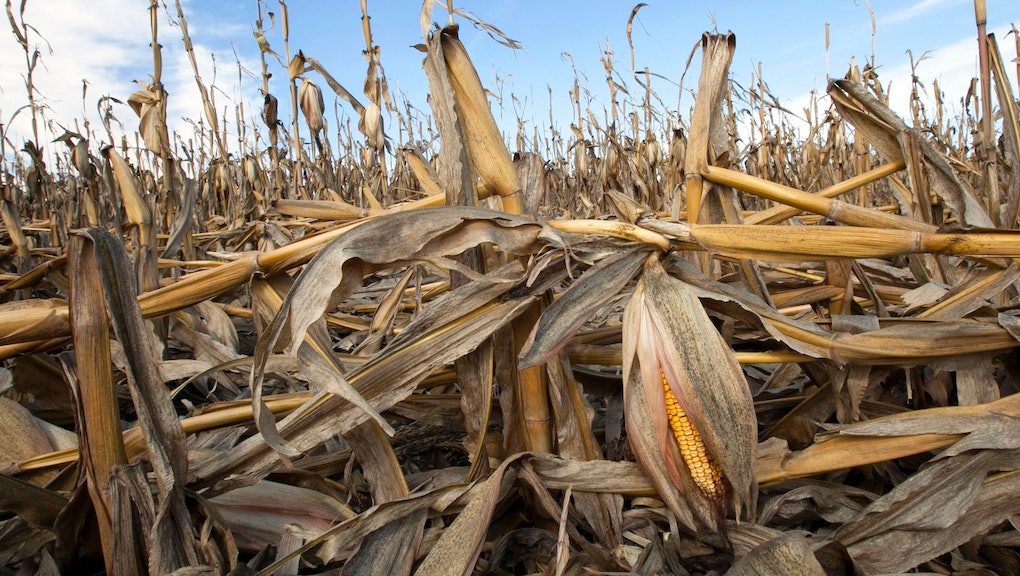 Climate change is threatening farmlands and endangering the world’s food supply, according to a new U.N. report

It's well known that humans need good land to grow good food. In cultures all over the world, farms and ranches are important in most, if not all, communities. But a new report from the United Nations (UN) warns that climate change could threaten existing farmlands, impacting both the quality and the quantity of food supplies all over the world.

The report, published by the UN's Intergovernmental Panel on Climate Change (IPCC), was released on Thursday and authored by over 100 researchers from 52 countries. It detailed how greenhouse gasses could change ecosystems; how the difficulty of sustainable land management can contribute to human adaptation and migration; the desertification of lands; and safe, stable access to food.

According to the report, people use one-fourth to one-third of the Earth's lands to feed or supply their communities. The usability of these lands is rapidly shrinking as dry, arid, desert areas grow due to excessive deforestation. The abnormal heat could also change what types of produce are available, potentially raising the cost of certain foods.

Current farming practices won't be able to keep up with the climate. "[These] changes threaten to exceed the ability of the agriculture industry to adapt," stated the IPCC.

On top of losing farm-friendly lands, communities are also at risk of experiencing extreme weather — such as stronger storms and enormous wildfires — that can threaten to destroy food crops. And this isn't a sequence of events that will happen one after another, giving people and their lands time to prepare, either; The New York Times noted that all of these climate change events are happening at the same time.

These changes will impact poorer countries the most, cautioned the report, and the breakdown of food sources could encourage further immigration to countries with more plentiful sources of food.

"People’s lives will be affected by a massive pressure for migration," explained one of the report's lead authors, University of Aberdeen professor Pete Smith, to The New York Times. "People don’t stay and die where they are. People migrate."

In fact, there are already signs of that happening. The New York Times reported about this topic in April, finding that migration from countries in South America and Mexico have increased during the past years due to the rising difficulty in making a living. Crops and harvests have failed due to the unpredictable weather, increase in pests, and rising temperatures. Food shortages in farming communities have left people undernourished. The lack of harvests created smaller incomes for already struggling families. It has spurred an increase in migration so significant that researchers noted it as unusual, suggesting this phenomenon is related to climate change.

Fortunately, the report found possible solutions that could alleviate some of the effects of climate change. The downside? It reveals that, as much as farmers are damaged by climate change, a lot of current farming practices actually accelerate it.

The draining of wetlands and deforestation of areas to make way for pastures and farmlands is hurting communities in the long run. Carbon dioxide, free from any natural 'traps' that can dispel it, rises into the air and into the atmosphere. Ranches overrun with cattle also create obscene amounts of methane gasses that damage the ozone layer.

The report not only suggests educating and changing the way we farm, but also the way we eat. The demand for food has increased, which spurs farmers and ranchers to destroy natural environments for expansions to keep up with demands.

"[C]onsumption patterns have contributed to about 2 billion adults now being overweight or obese," stated the IPCC. In contrast, "an estimated 821 million people are still undernourished."

Yet still, according to the authors, about 25-30 percent of all food is either wasted or lost. Food waste in combination with excessive consumption ends up creating a self-destructive pattern between consumers and producers. The researchers suggest encouraging communities to reevaluate their behavior as consumers, re-adjusting their farming practices, and seeking indigenous communities for knowledge on maintaining a balance between the local climate and providing food.

But these changes must be enacted now, warn the authors of the report.

"Above 2 degrees of global warming there could be an increase of 100 million or more of the population at risk of hunger," researcher Edouard Davin said in an email to The New York Times. "We need to act quickly."