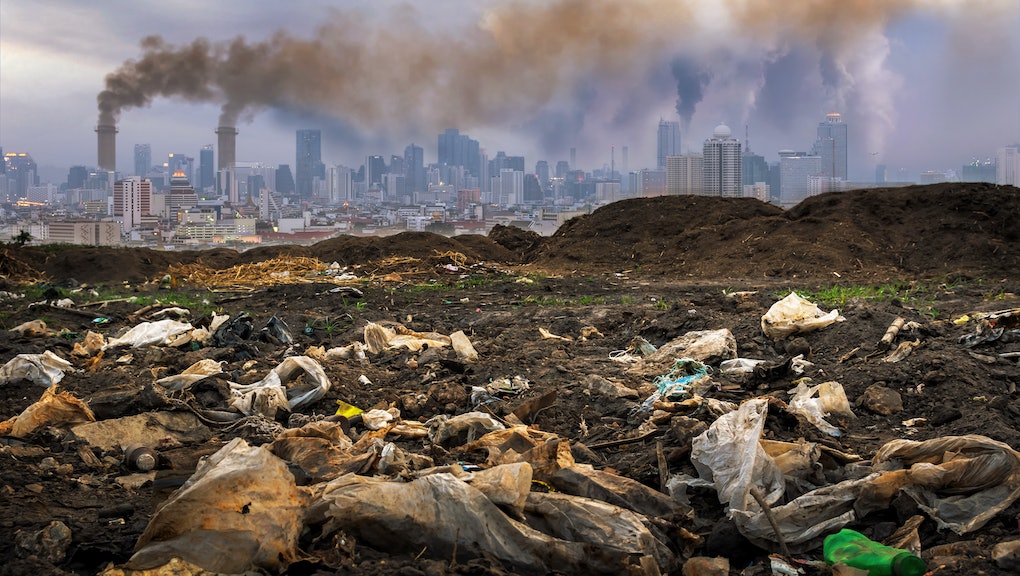 Conversations about climate change can often feel like we're talking about doomsday — it's a discussion about a process that may result in our planet becoming basically completely uninhabitable to us. It feels like there's not often good news when it comes to climate change, which makes some recent commentary published in the journal Nature a bit of a surprise. According to the publication, it seems that we have successfully managed to make the absolute worst-case scenario for climate change an unlikely outcome — though that doesn't mean that we are even close to being out of the woods yet.

What we have managed to avoid is something called the "business as usual" scenario. This potential outcome — which was first laid out during the fifth assessment report issued by the United Nations' Intergovernmental Panel on Climate Change (IPCC) — was a part of a number of so-called "Representative Concentration Pathways" that scientists used to model what might happen based on the amount of carbon we continue to pump out. The "business as usual" outcome, also known as RCP8.5, highlighted not only a failure to curb carbon emissions, but a consistent increase in the amount that we produced. It assumed that we ignored all warning signs and continued to use fossil fuels, particularly coal. RCP8.5 assumed a five-fold increase in the amount of coal burned globally and minimal policies put in place to limit carbon emissions. Had we gone down that path, we would have likely seen a nearly five-degree Celsius (41 degrees Fahrenheit) increase in global temperature by 2100.

The reason that we've avoided RCP8.5 is that, while we still have a long way to go in addressing all of our climate concerns, there has been a notable amount of movement in the right direction. Coal, one of the main focuses of the "business as usual" scenario, has its best days behind it already. Even as it is used to provide a significant share of the globe's energy, scientists believe that coal usage has peaked and will be on the way out the door. According to the International Energy Agency's 2019 World Energy Outlook report, coal is projected to be phased out almost entirely in the next few decades. The primary driving force for that is that renewable alternatives like wind and solar are now more affordable than the dirty-burning fossil fuel. Coal is about to become economically inefficient and unviable. Similarly, while much of our global climate policy has not gone far enough in fighting carbon emissions, we have made decidedly more progress on that front than the none at all laid out in RCP8.5. While the Paris Climate Agreement may be insufficient and has lost the United States as one of its signatories thanks to the Trump administration, it continues to exist as a useful framework for reducing carbon emissions. There's also the Kigali Amendment — part of the Montreal Protocol — that has successfully helped rid the world of dangerous chlorofluorocarbons that were responsible for tearing a hole in the ozone layer. Thanks to this policy the ozone is expected to make a full recovery in the next couple decades.

These policies have been at least partial successes — enough of ones that as of now, RCP8.5 is basically off the table. We have done enough collectively to avoid this dystopian outcome, which was always intended to be the absolute worst-case scenario. But now that we've managed to avoid that disaster, scientists believe it's time that we reorient our objectives and continue pushing for improvement. By continuing to push the "business as usual" scenario, there is concern that there will be confusion about the likelihood of that outcome — and fears that critics may latch on to this talking point and accuse scientists of being the "the boy who cried wolf" when none of it comes to pass. Miscommunicating these models does not serve the public interest, as it is better to focus on realistic scenarios and how to address them — particularly since the path that we are currently on is still not great, even if it's not a flat-out climate armageddon.

While we might not be hurdling toward a five degree Celsius temperature rise by 2100, our current path would place us at about a three degree Celsius increase in the global temperature — more than enough to produce some catastrophic events. According to data compiled by environmental organization Carbon Brief, a three degree Celsius rise would guarantee that the Arctic would experience a complete ice loss during its summer months, flooding the oceans with massive amounts of displaced water and causing a significant increase in sea levels by as much as six feet that would displace millions of people living in coastal cities. Extreme weather events like heat waves, droughts, and floods would all see major upticks at this level of temperature rise, and many species would be pushed to the brink of extinction as their ecosystems experience disruption. A three degree Celsius increase might be enough for humanity to survive, but the planet that we know would be significantly changed for the worse.

On the opposite side of the spectrum of RCP8.5 is RCP2.6 — the best-case scenario. Under this outcome, the global temperature is kept from rising about two degrees Celsius — the same goal established for countries to collectively aim for by the Paris Climate Agreement. We are not on track for RCP2.6 — and there are some scientists who believe, depending on global population growth over the course of this century, we may risk falling back onto the track toward RCP8.5. The window for us to control this destiny is getting increasingly small — climate change is accelerating, according to some scientists, and tipping point events that were supposed to be in the near future may have already come to pass. Avoiding the worst-case scenario is not enough. We need to find our way to RCP2.6 if we want to stand any chance of preserving much of the planet that we call home, and we shouldn't need the threat of doomsday to convince us of that.

More like this
7 climate podcasts to help you make sense of the future
By AJ Dellinger
Biden's pledges aren't enough to avoid the worst effects of climate change, new study says
By AJ Dellinger
The skyscrapers of the future will be made of wood
By Rima Sabina Aouf
Stay up to date