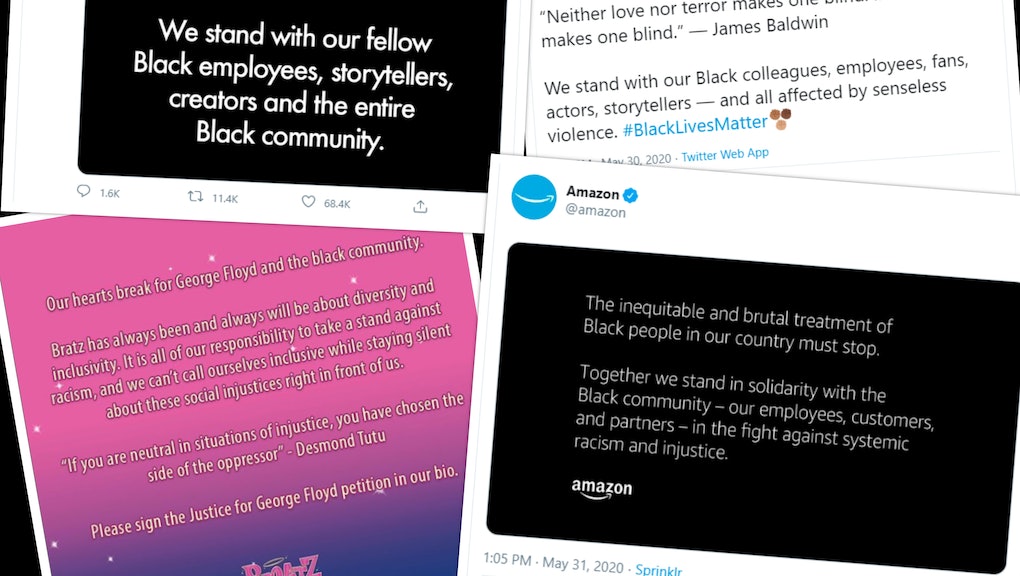 Companies want to make sure you know they're not racist

You can never tell which brand goes first. Maybe it was Twitter adding #BlackLivesMatter to the bio of its official account, or NFL commissioner Roger Goodell calling for an “urgent need for action” after suppressing black protest for years, or HBO tweeting a James Baldwin quote. But after days of nationwide protests against the killing of George Floyd, which were met with pervasive police violence and escalation, the barrage of corporate activism cascaded down the feed throughout much of the weekend.

No company seemed to disqualify itself from the discourse, regardless of its history of compounding injustice. There were somber messages from Google, Amazon, Netflix, Bratz dolls, the bidet company Tushy, CBS, L'Oréal, and a copy-pasted message shared across the Disney, Star Wars, and Marvel accounts. With few exceptions, these posts follow similar non-specific verbiage: standing against racism, urging inclusion and unity, and sometimes actually typing out Black Lives Matter. Many of the entertainment industry posts stand in solidarity with “black colleagues, creators, partners, and audiences,” or in clearer terms: everyone who helps keep the lights on.

These are likely coming from the same overworked social media managers who’ve been tasked with providing corporations with a relatable voice. (Some of the leading purveyors of this approach — Wendy’s, Arby’s, and the self-righteous Steak-umm Twitter presence — were conspicuously silent over the weekend.) Although as anyone with a passing knowledge of these companies could notice, it’s very easy to summon a serious post condemning the killing of George Floyd while directly or indirectly contributing to the police state.

Nextdoor, the social media service tinged with racist paranoia that turns everyone into cops, got in on the action. Google claimed to stand “in support of racial equality, and all those who search for it,” while serving as an indispensable surveillance tool for the police. CBS, whose primetime drama lineup for the past two decades has almost exclusively consisted of cop procedurals, plans to go entirely dark for 8 minutes and 46 seconds at 5:00 on Monday in a tribute to Floyd. Amazon — where to begin — has partnered with hundreds of law enforcement agencies, helped police plan sting operations involving Amazon-branded dummy packages, and fired and smeared a black warehouse worker for exposing the company’s poor pandemic protections.

No matter how out in the open the dissonance is, these companies charged forward with the spiritual successor to pandemic “disastertising,” which led to some strange missteps but more broadly an opportunity for companies to seek consumer trust and easy commendation for the bare minimum. A chief marketing officer posited to The Atlantic in April that this can be a risky endeavor for companies who aren’t actually looking out for their workers. “It’s super, super important right now to have all your ducks in a row, because if you want to say anything that’s meaningfully human at this time, you have to be operating in very human ways, and that’s not true of every company,” she said.

It’s a calculating assessment, but one that’s seemed to slide by the wayside in recent days. Companies seem less concerned about wading into glaring hypocrisy than they worry about clearing this one hurdle before normal posting can resume at some indeterminate time. As each viral video of police kneeling with protesters, before suiting up moments later to inflict tear gas canisters, pepper spray, and rubber bullets on them would indicate, a lot of people are easily duped by these gestures.

On Tuesday, a very nebulous segment of the music industry is taking the opposite approach. Announced over the weekend with a congratulatory press release, a number of major record labels and radio stations will participate in the Music Industry Blackout, effectively taking “a day to disconnect from work and reconnect with our community.” Ignoring that large segments of the music industry have been in a state of pause for the past three months, this too, seems to skirt around the discomfort of promoting music or any other ephemeral culture right now.

While some labels have lent suggestions for bail funds and relief efforts, a more substantial number of major labels turn to the same empty verbiage in favor of the easiest ways they can offer support within music: giving black artists equitable payouts for participating in an industry that’s pillaged and profited from their traditions since the very beginning. Many independent labels, and organizations like Bandcamp, haven’t required a one-time PR exercise for tangible action.

Even when the tone turns morose and purposeful, it’s important to recognize these efforts as unending marketing on a slightly different end of the continuum that also brought you Boneless Thugs ‘N’ Harmony and the Wendy’s nugget boy tweet. It’s admittedly hard to imagine a genuine showing of solidarity from any of these corporations, short of dissolving vast aspects of the business, reshaping wage structure, or donating an eye-popping amount to bail funds. The dividing line between symbolic half measures and direct action has never been easier to identify, so anything shy of tangible gestures of racial and class solidarity should be met with extreme skepticism.

More like this
The NFT gold rush, explained by the world's first meme manager
By Kara Weisenstein
How “stoopers” turned New York City sidewalks into trendy, sustainable thrift shops
By Jasmine Vojdani
How tax prep companies conspired to make filing your taxes so damn hard
By Pat Garofalo
Stay up to date