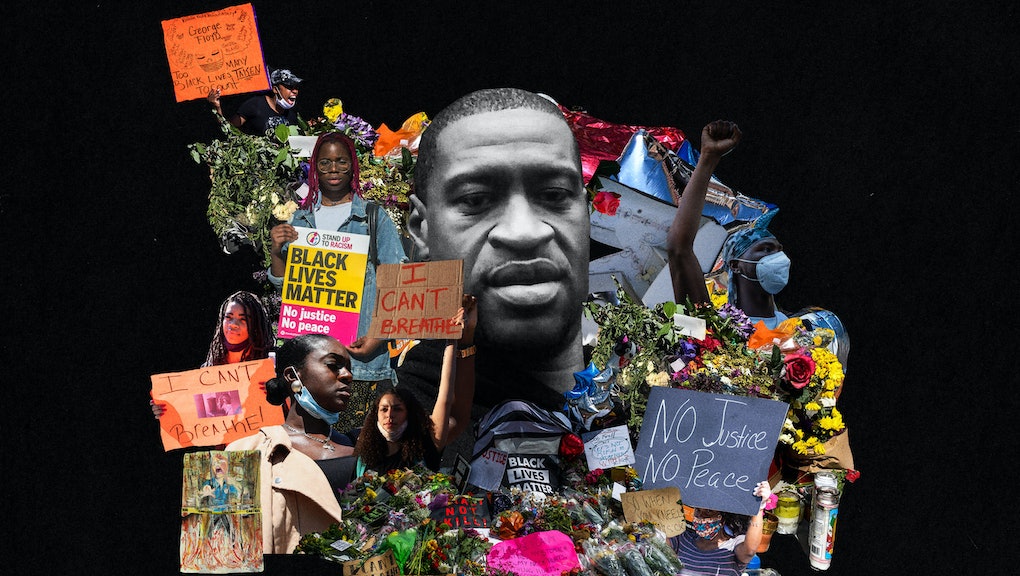 "We need you out here:" A firsthand account of Brooklyn's protest for George Floyd

On Friday morning, during an unusually somber Zoom call, Mic’s editorial team unpacked the chaos that had besieged Minneapolis as protesters demanded justice for George Floyd. The city had been looted and burned, a police station torched while fireworks lit up the night sky. A Black CNN reporter was arrested live on camera while his white colleague went unharmed. I watched the video four times and cried each time.

Just after our meeting, my boyfriend sent me an Instagram flyer that said “WE NEED YOU OUT THERE” for a protest at Brooklyn’s Barclays Center, which is just next door to my apartment building. I can see its grassy roof from my window. When concerts let out, I can hear people shouting on the street, Ubers honking, and the wail of police sirens.

The fight had come to my doorstep. While I’ve attended a good amount of protests — several Trump protests, including a protest of Trump’s “Muslim Ban” at JFK airport, Black Lives Matter protests, and women’s marches — I felt a nameless anxiety about this one. I even considered not attending at all. The flyer had said “prepare to escalate” and because I understood what was at stake — America’s refusal to value and protect Black people is killing them — I also understood what might need to be sacrificed.

When I walked out the door of my apartment building at 3 p.m., hundreds of police officers had descended on Dean Street in Prospect Heights and police vehicles lined the street for two blocks. Several avenues in each direction had also been cordoned off.

By 6 p.m., the rusted open arch above Barclays Center was filled with hundreds of people, some spilling onto Flatbush Avenue where NYPD officers in neon green and navy uniforms on bicycles had lined the street. A police helicopter circled the area.

Eric Garner died on my 30th birthday in 2014. Officer Daniel Pantaleo put Garner in a chokehold and held him there as he gasped for air, voice straining, pleading “I can’t breathe.”

Floyd’s death was remarkably similar. Both were approached by police for suspicion of a minor crime. For Garner, selling loose cigarettes. For Floyd, possession of a potentially counterfeit 20 dollar bill. Both were killed by police. Both had the same final words.

A bystander shot a video on their cell phone as MPD officer Derek Chauvin pinned Floyd’s neck to the pavement with his knee as Floyd wheezed “I can’t breathe.” Chauvin taunted him saying, “Get up and get in the car” as he continued to kneel on his neck. “You can’t win,” Chauvin says. Moments later, Floyd appears to be unconscious.

I realize that’s exactly why I considered not going at all — I feel like we can’t win. In a rare move, Pantaleo was found guilty. Chauvin was fired, but likely won't get convicted. And even if he is, it won't be enough. Garner’s death was seven years ago, and still, no progress has been made to protect the lives of Black people. America has been inept. Black people are dying and it just keeps happening.

At times, it’s enough to want to give up fighting entirely. To resign to cynicism and let grief replace anger. But anger is important, and the solidarity protests that have spread across the country from Los Angeles to Boston aren’t pointless. They’re an expression of outrage. They’re an essential step toward change. And I understood that at that moment.

By the time I made my way into the middle of the crowd, the protest was already escalating. Masked protesters who had been yelling “George Floyd, say his name” and “I can’t breathe” moments earlier were shouting “Fuck the police.” The police were behind a metal blockade in front of the Barclays Center entrance, and the crowd pushed against it, tossing water bottles and garbage at the police.

As protesters continued to push against the barrier, the NYPD began spraying tear gas and mace across the entire front line of the crowd. As people receded, some that had been gassed dropped to their knees as others helped to pour a mixture of baking soda and water into their eyes.

Later, protesters climbed the Barclays Center subway station and stood on its grassy roof beneath looming grey rain clouds. One wore a pig mask. Another held a yellow sign that said “Trump doesn’t care about us.” Shortly after, they were removed and replaced by police.

On the Flatbush Avenue side of the protest, a fire was started.

On the Atlantic Avenue side, tensions escalated, with police pepper spraying and hitting people in the crowd with their batons.

As it got darker and the crowd still had not dispersed, riot police were called in. Police tried to commandeer an MTA bus to transport protesters who were arrested and the driver refused. A police officer threw a woman to the ground; she was later hospitalized.

Protesters started to move down the streets toward Fort Greene park where a police van was eventually set on fire.

On Classon avenue, protesters were throwing eggs and cement. A police vehicle passed by and opened the passenger side door, striking a a man.

Just minutes before 11 p.m., Mayor de Blasio tweeted, “We have a long night ahead of us in Brooklyn. Our sole focus is deescalating this situation and getting people home safe.”

At the protest, though I set out to do some reporting, I only got a comment from one person, a middle-aged white woman with a sign that had the names of Black people who had been killed painted in black.

“I came here to support my black brothers and sisters. We gotta stop killing Black people in this country,” she said. “I hope it’s the beginning of change — serious change.”

This August, it will be five years since the Ferguson riots. We’re still rioting because nothing has changed. As the protest chant goes, “No justice, no peace.”

But until then, we’ll keep fighting.

If you want to help the people protesting the death of George Floyd, donate to Minnesota Freedom Fund.