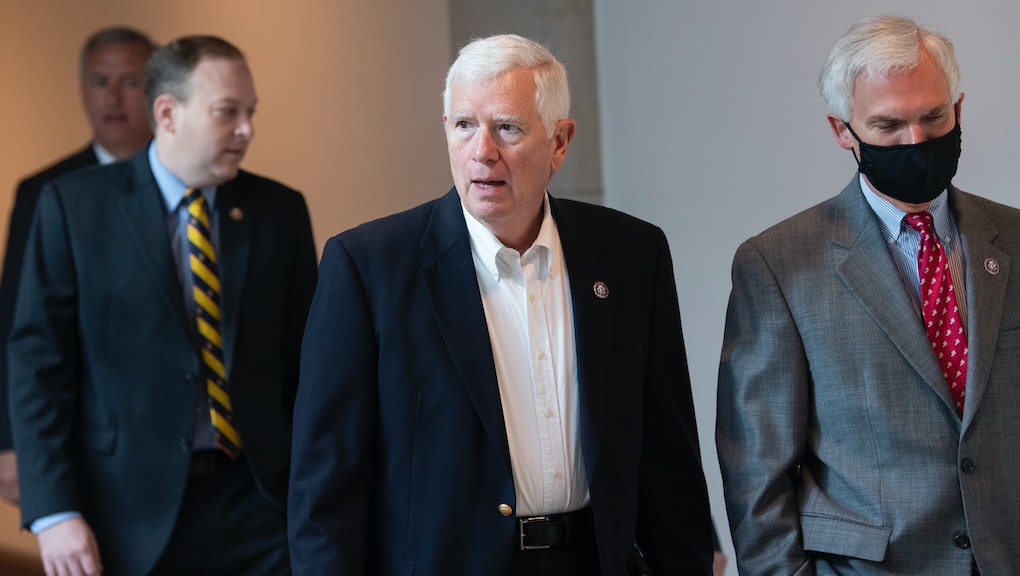 Congrats to GOP Rep. Mo Brooks for tweeting his own passwords out to 100k followers

Even before this week began, there was strong evidence to suggest that Alabama Republican Rep. Mo Brooks was the dimmest member of the United States Congress. He quoted Hitler on the House floor; he said climate change was caused by rocks falling into the ocean; he once threatened that "if I have to filibuster on the Senate floor, I’ll even read the King James Bible until the [former President Donald Trump's border] wall is funded."

So, yeah, even by the abysmally low standards of "Who in Congress is extremely dumb?" Brooks was, if not the number one contender, at least very, very high on the list. Until this week, when he proved beyond a shadow of a doubt that he deserves the title of reigning heavyweight moron. Give this man a fancy gold belt. He's earned it.

You see, for the past few months or so, Brooks had been conspicuously hiding out, hoping to avoid being served a lawsuit from his Democratic colleague, Rep. Eric Swalwell (Calif.), over his role in the Jan. 6 insurrection on Capitol Hill. Brooks's avoidance techniques were so effective that Swalwell's attorneys had to go so far as to hire a private investigator in order to track down the errant congressman — which they eventually did this week, according to a very disgruntled tweet from Brooks, complaining that "Swalwell's team committed a CRIME by unlawfully sneaking INTO MY HOUSE & accosting my wife!"

An attorney for Swalwell called Brooks's allegation "completely untrue," adding that "no one entered or even attempted to enter the Brooks's house" to serve the lawsuit.

Complicating Brooks's claim about what by all indications appears to have been a perfectly legal effort by a process server to do their very straightforward job is the fact that prior to sending the above tweet, he sent a nearly identical version — since deleted — that included a few crucial details, like his email password and an unspecified PIN number. You know, unimportant stuff.

The un-redacted, extremely bad infosec tweet was left up on Brooks's timeline for hours, from Sunday afternoon until Monday morning, when it was eventually deleted.

It's one thing to blast off a conspicuously Trumpian declaration that a "HORRIBLE" crime has been committed against you without actually, y'know, proving that anything happened. But it's another thing completely to try and show how well you can outsmart a political opponent, only to hand the general public the keys to your inbox and who knows what else. Well played, sir!

To be clear, Swalwell's lawsuit is in no small part a political stunt: It's the sort of attention-seeking effort that seems designed to keep his own name in the headlines as much as it's about actually holding Brooks responsible for anything. And yet, despite the obvious transparency of Swalwell's ploy, Brooks somehow managed to bungle his response so badly that he not only failed to "own the libs" as intended, but ended up proving once and for all that he is Congress's perfect little idiot. It's impressive, honestly.