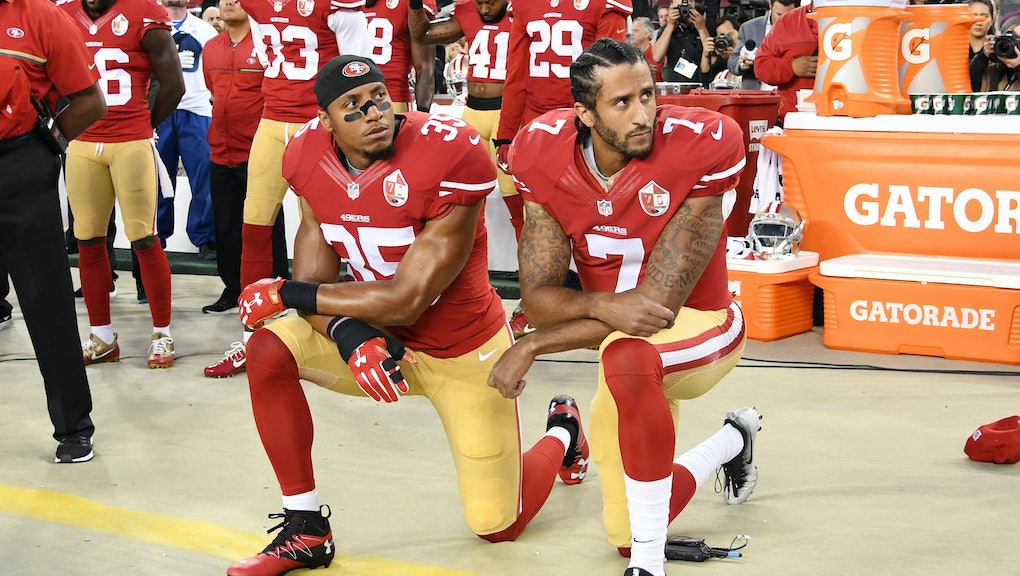 My, my. What a difference time and a little perspective can make. Pro-football player Colin Kaepernick was first vilified by the president and conservatives four years ago for kneeling during the national anthem at NFL games, and their criticism has pressed on. The former quarterback for the San Francisco 49ers ignited a movement when he knelt to protest police brutality and racism — and sacrificed his sports career in the process. But with Americans in all corners of the country calling for social justice in response to George Floyd’s murder this spring, Kaepernick is finally being recognized, more universally, as the voice of a generation.

Firstly, the NFL appears ready to atone for its sins — namely, the allegations that 32 teams colluded to keep Kaepernick out of the league, after he opted out of his contract in March 2017 and wasn’t picked up by another team. (Kaepernick and the NFL reached a settlement in 2019, but he remains a free agent.)

Now it seems the former quarterback’s return to the league could be mere weeks away. NFL Network’s Michael Silver reported “multiple” teams and at least one head coach are seriously interested in signing Kaepernick, as soon as the coronavirus pandemic abates enough to safely hold tryouts. Kaepernick famously filmed his own workout for NFL coaches last year to prove he was in playing shape after several years off the field, but the stunt didn't result in a job offer.

Even Kaepernick’s most vitriolic critics seem ready to give him another chance. Donald Trump famously urged NFL owners to fire protesting players in September 2017. A year later, when the NFL banned kneeling during the national anthem, Trump praised the decision and posited that disgruntled players “shouldn't be in the country.” Two weeks ago in an interview with the Sinclair Broadcast Group, Trump changed his tune and said he’d love to see Kaepernick “get another shot.”

While the NFL and conservatives are still coming around to welcoming Kaepernick back into the fold, he’s long been a bona fide hero to his supporters, a.k.a. people interested in racial equality. Netflix is recognizing Kaepernick’s importance by producing a six-episode series about him, called Colin in Black & White, helmed by acclaimed director Ava DuVernay. It’s penned by Michael Starrbury (When They See Us) and centers on the athlete’s teenage years, namely his upbringing as a Black child with white adoptive parents in Northern California and his early sports successes.

“Too often we see race and Black stories portrayed through a white lens,” Kaepernick said in a statement released Monday announcing the Netflix series. “We seek to give new perspective to the differing realities that Black people face. We explore the racial conflicts I faced as an adopted Black man in a white community during my high school years.”

Legendary former Green Bay Packers quarterback Brett Favre recently told TMZ Sports he assumes Kaepernick will achieve “hero status” for furthering the Black Lives Matter movement. “It’s not easy for a guy his age, Black or white, Hispanic, whatever, to stop something that you’ve always dreamed of doing and put it on hold — maybe forever — for something that you believe in,” Favre said. Favre drew ire, however, for comparing Kaepernick to Pat Tillman, the NFL player who volunteered for the army in 2002 following the 9/11 terrorist attacks and was killed in the line of duty in 2004.

Conservatives cloaked their criticism of Kaepernick and other kneeling pro athletes in patriotism initially, claiming their problem with the protests was that they disrespected the national anthem. Now that the Black Lives Matter movement has gone mainstream, what’s evident is that “disrespecting America” was a dog whistle leveraged to suppress the Black Lives Matter movement and Kaepernick’s right to free speech.

As Kaepernick has made evident, Black celebrities are taking a real risk when they use their platform to protest inequality. Actor John Boyega gave an impassioned speech at a Black Lives Matter protest in London in early June and speculated his activism could get him blacklisted. "Look, I don’t know if I’m going to have a career after this, but fuck that,” Boyega said over a megaphone. Many in Hollywood rushed to show support, including Jordan Peele (Us, Get Out) who tweeted, “We got you, John.”

It’s encouraging to see Hollywood and America more broadly begin to rally around Kaepernick and other celebrity activists. But it’s still disgraceful that so much abuse was hurdled his way, for years, as punishment for taking a knee in peaceful protest against police brutality. As the catalyst of a major social justice movement, Kaepernick deserves an apology, a lucrative NFL contract, that Netflix series and so much more.

More like this
The Olympics can't pretend athlete protests aren't happening
By Kara Weisenstein
Pink offers to pay the Norway handball team's ridiculously sexist bikini fine
By Kara Weisenstein
The 2021 Olympics have their problems, but athletes still need our support
By Adam Aziz
Stay up to date