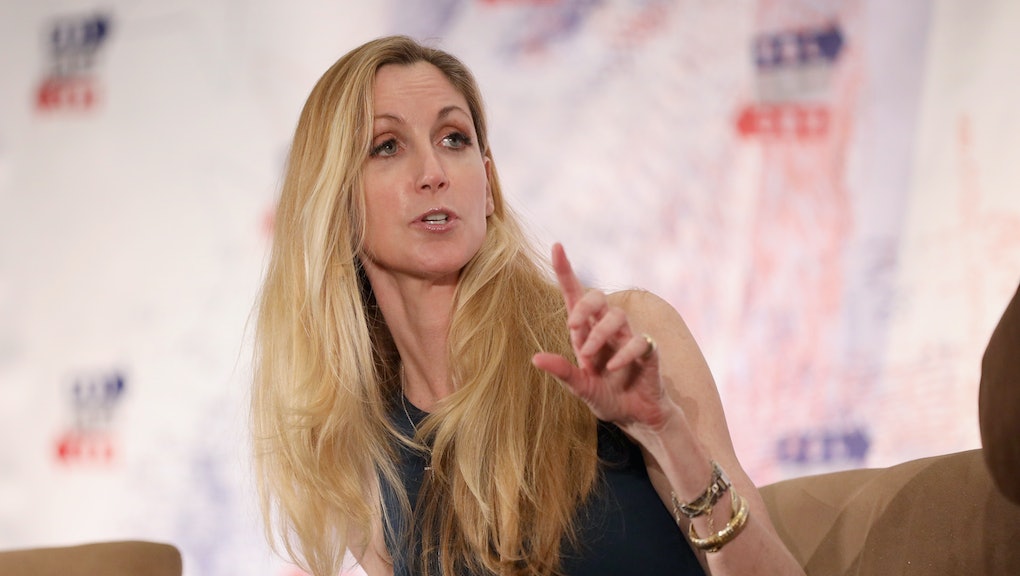 Politics is weird. Sometimes the worst thing a person can do for a candidate is tell people they like them. And while Democrats are desperately scrambling to find somebody — anybody! — they think can defeat Donald Trump in the upcoming general election, a cadre of high-profile conservatives have been tweeting through it, and their tweets aren't exactly helping.

Let's start with Massachusetts Sen. Elizabeth Warren, whose campaign has been tearing itself in half trying to straddle both progressive and moderate electoral lanes. The Warren camp must be thrilled to know that Ann Coulter, who once defended a white nationalist organization and also Nazis, has noted the senator's apparent uber-competence and enthusiasm for getting things done.

Presumably Coulter's tweet — sandwiched between some deeply transphobic garbage — was meant as an insult. But honestly, if I were on Warren's campaign team, I'd be pretty happy that someone as reviled on the left as Coulter seems positively shook at my candidate's capacity for making things happen.

Which brings us to former Fox News host and accused sexual harasser Eric Bolling, who gave Pete Buttigieg, the former mayor of South Bend, Indiana, what may well be a kiss of death amongst Democrats by essentially endorsing him in the same breath as President Trump.

"To be honest," Bolling says, he is thrilled to vote for a president who has been accused of sexual assault dozens of times, enacted racist policy, and embraced authoritarian tendencies. But if pressed to choose a Democratic candidate, he admits Buttigieg is his man.

Bolling has denied the accusations of sexual misconduct against him, but that probably won't make his support any more palatable to Buttigieg. Presumably the former mayor — who has struggled to connect with African American voters while attempting to stake his claim as the most sensible, middle-of-the-political road "moderate" in this entire race — isn't all that enthusiastic about being praised by a man who once criticized President Barack Obama for hosting Common in the White House by saying, "It's not the first time he's had a hoodlum in the hizzouse." (Bolling later apologized for his racist comment.)

Throwing fuel on this already unnecessary fire was Trump himself, who quickly tweeted that he could "live with" Bolling's duel endorsements.

Rounding things off was none other than the nation's eldest first son, Donald Trump Jr., who did his very best to mock Tuesday's (admittedly not great) South Carolina Democratic debate.

The Muppets are a beloved franchise full of iconic characters who prioritize kindness and the celebration of individuality while perpetually managing to pull off any number of impossible-seeming achievements despite the numerous obstacles in their way. Surely this is what Don Jr. meant to evoke?

Whether any of these backhanded, inadvertent "endorsements" will actually matter to voters remains to be seen. But personally, I would love for the next debate to feature a round of questions about what candidates think of their most problematic boosters that doesn't feature the phrase "Bernie bros."

More like this
The real reasons employees aren't rushing back to work
By Noah Berlatsky
Newsmax bent over backwards to be pro-Israel, ended up being anti-Semitic
By Rafi Schwartz
Kevin McCarthy is having a really weird day
By Rafi Schwartz
Stay up to date