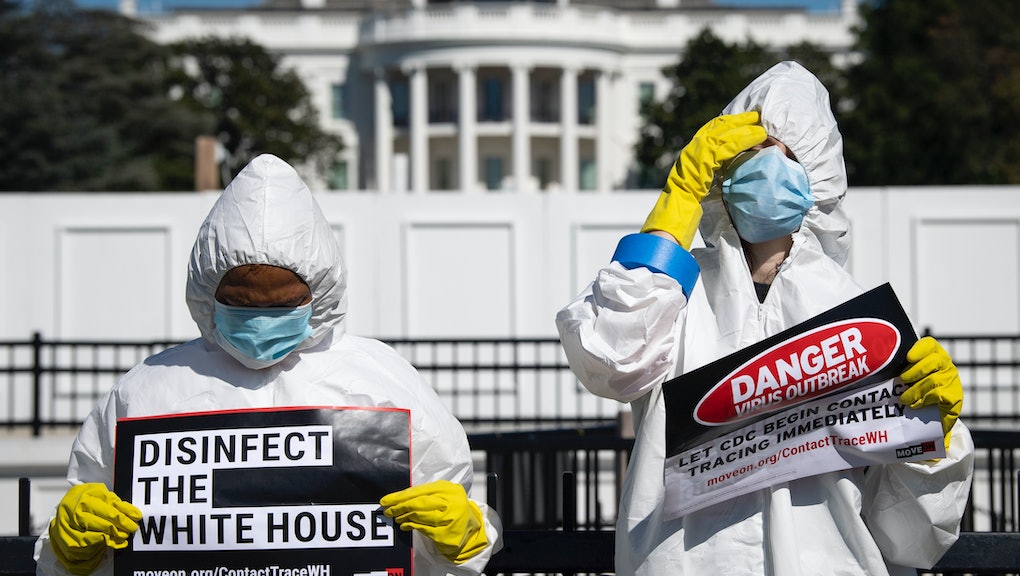 Coronavirus in the White House: A running list of everyone in Trump's inner circle who has tested positive

On Oct. 1, when the White House announced that Hope Hicks, a key adviser to President Trump, had tested positive for COVID-19, it kicked off a frantic scramble by administration officials to contain what we've since learned was a massive coronavirus outbreak in the White House. It was so sprawling that it infected the president — possibly the most protected man in the world — along with his wife and a number of high-profile aides, conservative allies, and White House employees alike.

While the White House tried to keep the public in the dark as much as possible about any number pertinent questions raised by the outbreak, including its source, its full effects on the president's health, and even the total number of people infected, it became increasingly clear that the White House's extremely mask-less, extremely unsocially distanced Rose Garden nomination ceremony for now-Justice Amy Coney Barrett was essentially a superspreader event that helped propel the virus's spread through the administration.

An internal Federal Emergency Management Agency memo obtained by ABC News in early October pinpointed at least 34 people connected to the White House who had contracted the virus. Since then, two more outbreaks have roiled the administration, including one a few weeks ago amid Vice President Mike Pence's ranks. With the news that White House Chief of Staff Mark Meadows tested positive for coronavirus over the weekend, plus the announcement Monday that Housing and Urban Development Secretary Ben Carson had also tested positive, it seems now the White House is entering its third coronavirus wave.

Given that both Meadows and Carson were at the Trump election night party, reportedly in close quarters and mask-less with dozens of others, it was always likely that more names would trickle out. And in recent weeks, two more heavy-hitters in Trump world have been added to the infected list in the president's son, Donald Trump Jr., and his personal lawyer Rudy Giuliani. Here's what we know about who in Trump's web has contracted coronavirus.

It's entirely possible that we will never know the names of some of those infected in the president's orbit — the White House has consistently been asking people who have tested positive for coronavirus to use "discretion" when revealing their diagnoses.

Still, given the ever-growing list of infectees, the broader picture is abundantly clear: The president and his inner circle have become one of the most dangerous vectors for coronavirus in the country. Their refusal to diligently wear masks — even after the Barrett event became a nexus for the virus — and rely inappropriately on rapid-test results to justify holding reckless gatherings is quite galling, especially with the country on the cusp of another massive spike in cases. With just over a month left in office for the Trump administration, we're left waiting to see how many more people will suffer as a result of their incompetent and unscientific response to the pandemic.

This article was originally published on November 9, 2020