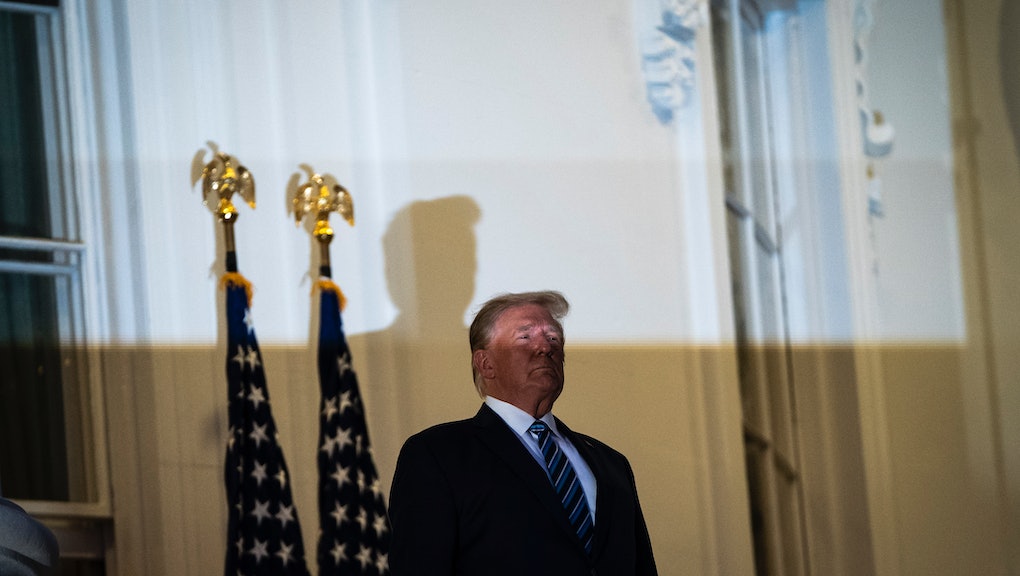 After a three-day stay at Walter Reed medical center, President Trump made his way up the South Lawn steps to prove that he could defeat the coronavirus pandemic that has claimed over 210,000 American lives. Critically, even as he offered a message of dominance from the balcony over the South Lawn over his own COVID-19 infection — amid what appeared to be labored breathing — he himself is still contagious. Trump's apparent lack of concern for basic recommendations regarding mask usage and social distancing has not only resulted in poor health for him and his inner circle, but has jeopardized everyone else who works in the White House.

Permanent members of the White House staff, such as groundskeepers, cooks, and maintenance staff, labor in what's now ground zero for a coronavirus outbreak. After the news broke that Trump's Supreme Court nomination ceremony for Amy Coney Barrett was almost certainly a coronavirus superspreader event, basically nothing has been done to manage the outbreak even as more cases are reported each day.

Given their potential for exposure to the virus — despite working in the most secure home in America — White House staff have essentially been transformed into frontline workers. Permanent staff aren't nurses, doctors, or teachers, but their working environment is controlled by someone who demonstrates an intentional lack of concern for the wellbeing of others. White House representatives, including Trump's press secretary Kayleigh McEnany, have not released information about how many staff have fallen ill with the viral infection, nor have they elaborated on measures taken to enforce safety protocol, but it was reported this week that a White House valet had tested positive after traveling with the president last week.

"Of all the employees working on the White House grounds, perhaps no one has more exposure to the first family than the roughly 100 members of the residence staff," The Atlantic wrote. "They ride elevators with the first couple, helping them get to their destination; they iron their clothes and change their sheets; they escort them across the White House grounds; and they deliver their meals." Now, two members of that family have been confirmed to have coronavirus, with the rest of them declining to wear masks even when asked.

"There are reports that COVID is spreading like wildfire through the White House."

The White House claims that support staff have received sanitation supplies, filtration devices, and other forms of personal protective equipment. But the slow, often inconsistent, and flat-out untrue information coming out of the White House leaves it very unclear as to how, exactly, the Trump administration is protecting the permanent staff who keep their day-to-day lives afloat. (Mic reached out to the office of the press secretary for comment but did not receive an immediate response.)

Yet apparently, the Trump administration is remaining tightlipped with White House staff about the possible risks to their health. "There are reports that COVID is spreading like wildfire through the White House," an unnamed senior white house official told Intelligencer. "There are hundreds and hundreds of people who work on-complex, some who have families with high-risk family members. Since this whole thing started, not one email has gone out to tell employees what to do or what’s going on."

But under the Trump administration's own Labor Department guidance, employees who complete the daily work that keeps the White House functioning are entitled to protections. The Occupational Safety and Health Administration (OSHA), which "promotes the safety and health of America’s working men and women," even stipulates that employees can sue their employers who create life-threatening work situations.

The Department of Labor is headed by the Secretary of Labor, who just happens to be the late Supreme Court Justice Antonin Scalia's son, Eugene Scalia, who attended the possible superspreader event. But it appears as if Scalia's department isn't upholding the credo of worker protections outlined in his own OSHA guidelines, which state: "The head of each agency shall acquire, maintain, and require the use of approved personal protective equipment, approved safety equipment, and other devices necessary to protect employees."

As Dave Jamieson, a labor reporter for HuffPost, pointed out on Twitter, White House employees may have a legal claim against the president under OSHA guidelines, given his continued recklessness about coronavirus. "One former OSHA official tells me there's a strong case to be made he's violating the general duty clause," Jamieson wrote. The general duty clause claims that employers must "furnish to each employee employment and a place of employment which are free from recognized hazards that are causing or are likely to cause death or serious physical harm." In other words, the same protections offered to those working in meatpacking plants earlier this year should also apply to White House staff.