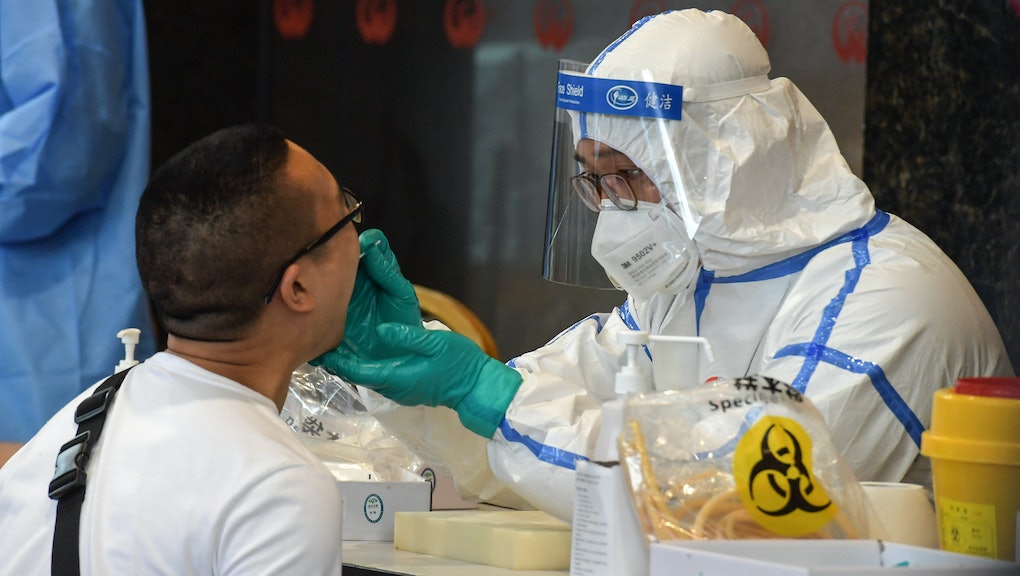 Coronavirus is back in China. Here's what you should know

Authorities in China shut down Beijing’s biggest wholesale food market on Saturday after new cases of coronavirus infection cropped up in the city. China’s capital reported 53 new cases of COVID-19 over the weekend, the New York Times reported. China hadn’t reported a single new case of novel coronavirus infection for two months until June 12, but when the virus was detected on a cutting board in the Xinfadi market, officials shut down the market and started testing. Chinese authorities are now trying to contain the spread of this new COVID-19 outbreak in Beijing using strict military measures.

You may be wondering how the virus was spread. Well, as is becoming the norm, no one is exactly sure. The virus was found on the chopping block of a salmon seller in the market, but experts haven’t exactly explained whether the virus spread through seafood, through the close contact of people in the market, or if there’s another reason entirely.

We know most coronavirus transmission happens person-to-person, and that they don't know whether coronavirus found on surfaces can actually infect someone. But almost all of the 53 people infected worked or shopped at the market, more than 10,000 people work at Xinfadi market, and it supplies about 90% of the city’s fresh produce, the Times reported.

Another confusing element of the outbreak is that the strain of novel coronavirus that is primarily being detected is one that is more common in Europe than in China, CNN reported. The salmon being sold in the market was imported from Norway, reported the Global Times, a tabloid published by the Chinese Communist Party's newspaper, People's Daily. While this combination of elements is sparking concern about food safety, it is not clear that the virus was spread through meat or produce. From an educated layperson’s perspective, though, I can’t help noticing how many times novel coronavirus infections have been associated with meat processing, both here and in China.

China has adopted “wartime” measures to curb this outbreak, reported CNN. Eleven residential compounds were locked down and authorities are setting up mass testing. Samples have been taken from almost 9,000 people who worked at Xinfadi market. Six thousand of those tests have come back negative, CNN reported. The outlet also noted that the Chinese government is currently tracing and tracking down 30,000 people who had contact with the market in the past two weeks for COVID-19 testing.

While China’s approach to novel coronavirus containment was previously criticized for being “draconian,” recent global polling suggests that people around the world think that China has responded effectively to the pandemic. "There is no way Beijing becomes Wuhan 2.0.” Hu Xijin, the editor-in-chief of the Global Times, said on Twitter Monday. “The world will see China's powerful capacity in controlling the epidemic, including (the) government's strong leadership, respect to science, public's willingness to cooperate and nationwide coordination of control measures. We will win again." Well, God bless the People's Liberation Army, I guess.

More like this
We're facing a fourth wave of coronavirus, despite vaccines. Here's why
By Tracey Anne Duncan
COVID-19 vaccine drug interactions: Is there anything I should avoid?
By Joseph Lamour
Why Johnson & Johnson vaccine sites in 3 states have been shut down
By Tracey Anne Duncan
Stay up to date