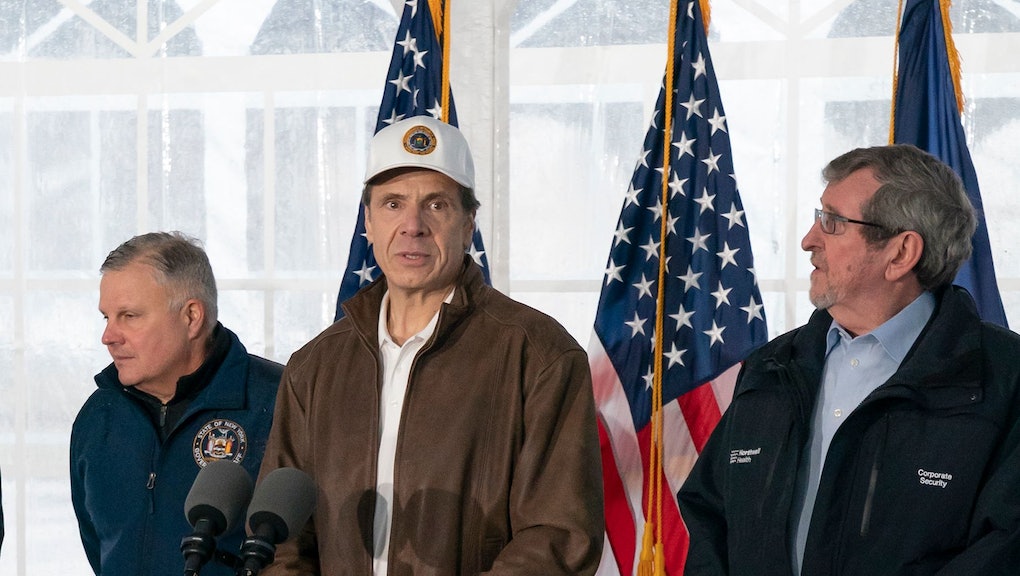 Coronavirus spurs action from governors amid Trump's lack of response

States across the country are gearing up for the coronavirus crisis on a wartime footing. Hospitals are facing potential shortages of critical respirators and ventilators as ICUs prepare for a wave of newly diagnosed patients. Many could be forced to triage desperately ill people to determine who gets limited lifesaving resources.

“When you look at the projections, there’s every chance that we could be Italy,” the U.S. surgeon general said Monday, referring to the country’s total lockdown and rationing of healthcare amid a skyrocketing number of fatalities.

Amid the sky-high fears and growing number of coronavirus cases, states have turned to the federal government for guidance and assistance with procuring the necessary equipment. They may not get the help they need.

“Respirators, ventilators, all of the equipment — try getting it yourselves,” President Trump said on a conference call with America’s governors Monday, according to a report in The New York Times.

“We will be backing you, but try getting it yourselves,” he added. “Point of sales, much better, much more direct if you can get it yourself.”

This angered and surprised some of the governors, who are desperate to give their constituents the medical help that large numbers of them seem likely to need. Time is increasingly of the essence, as the number of confirmed cases balloons from the hundreds into the thousands.

Trump told the governors that “we’re going to get it remedied and hopefully very quickly,” but he failed to respond to their demands with any concrete offer of help. As he flails around with increasingly meaningless gestures, the governors are seeking immediate solutions.

“If one state doesn’t get the resources and materials they need, the entire nation continues to be at risk,” said Michelle Lujan Grisham, the Democratic governor of New Mexico. Over the weekend, Republican Gov. Mike DeWine of Ohio ordered a shutdown of bars, gyms, casinos, and restaurants in the state. The governors of New York, Connecticut, and New Jersey followed suit in a joint statement Monday morning.

On Monday morning, New York Gov. Andrew Cuomo (D) went on Good Morning America and further demanded that the federal government send the Army Corps of Engineers to turn existing buildings into new hospital beds. “Tomorrow is going to be the wave breaking on the hospitals,” he said.

At a press conference Monday afternoon, Trump seemed perhaps sobered by the scale of the virus. “This is a bad one,” he said. “This is a very bad one. This is bad in the sense that it's so contagious. It's just so contagious. Sort of record-setting type contagion." He also shared some benchmarks later on Twitter.

Whether his concern translates into action that can help save lives in states across the country remains to be seen.