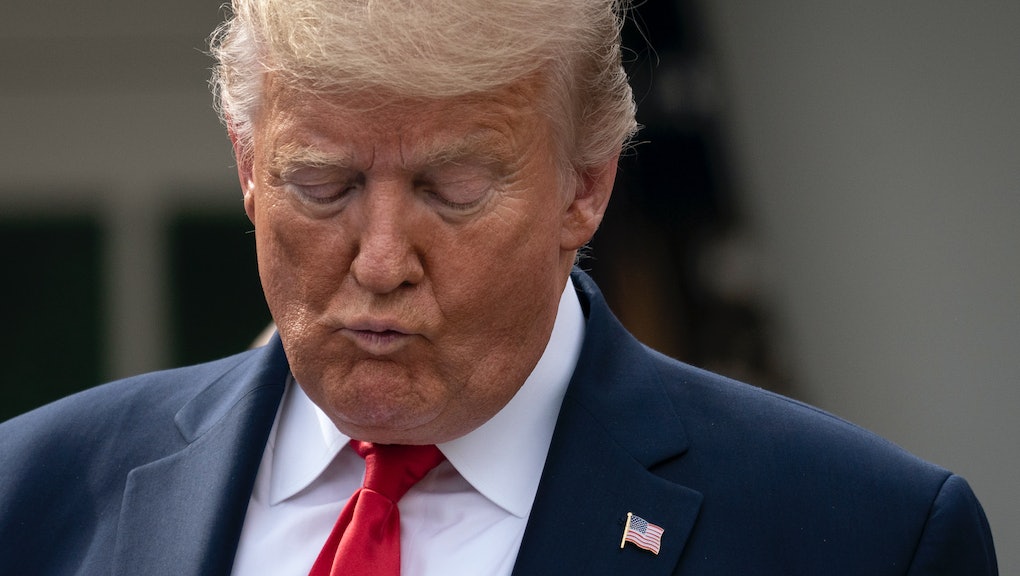 Trump's refusal to take responsibility is his truest moment as president

On Friday afternoon, President Trump gave up the act. Standing in the White House Rose Garden with an array of government officials behind him, he declared a national emergency over the coronavirus pandemic that is increasing in severity throughout the United States. Trump took specific care to single out several corporate leaders, allowing Walmart CEO Doug McMillon to tell the American public how he was lending some "portions of our parking lot" in "select locations" to provide the "drive-through experience" of coronavirus testing; the CEOs of Target and CVS had similar opportunities to tout their corporate cooperation. In declaring his national emergency, Trump paused to marvel at the "two very big words" he'd just uttered. He also offered several handshakes, likely to the chagrin of the CDC.

Perhaps his most careful act in this seminal moment of his presidency, however, was his assiduous refusal to take responsibility for any of the health crisis over which his administration currently presides. This is not an extrapolation of the president's words, nor is it a biased interpretation of something vague he said. It is a direct quote:

It's a stunning thing for the American public to hear that their commander in chief, the man who swore an oath to protect their liberty and their health, in fact feels no personal onus to deliver on that promise. Elsewhere in his remarks, Trump shirked the idea that his decision in 2018 to close the government's pandemic response office had played any part in the nation's abysmally insufficient response to, well, a pandemic. Beyond that, actually, he refused to even acknowledge that the event had happened at all.

"When you say 'me,' I didn't do it," the president told PBS NewsHour's Yamiche Alcindor, after dismissing her query as "nasty." He used a series of bizarre linguistic tricks to distance himself from his own presidency, saying, "We have a group of people, I could ask perhaps — my administration — but I could perhaps ask [Dr. Anthony Fauci, the head of the National Institute of Allergy and Infectious Diseases] about that because I don't know anything about it."

When asked directly by another reporter whether he might opt to self-quarantine, given his close contact over the weekend with a Brazilian official confirmed to have tested positive for the disease, Trump did not hesitate.

"Are you planning to take any cautionary measure to protect you and your staff who was there?" the reporter asked. "No," he said.

Meanwhile, high-profile Republicans like Sens. Ted Cruz (Texas) and Lindsey Graham (S.C.) and Reps. Matt Gaetz (Fla.) and Doug Collins (Ga.) have opted to self-quarantine out of an "abundance of caution" after coming into contact with individuals who have tested positive for coronavirus — not to mention the precautionary measure taken by Trump's own daughter Ivanka, who "worked from home" Friday because she may have been exposed.

The only one, it seems, who refuses to feel any personal responsibility in this crisis at all is Trump. Unfortunately for us, he's the one person who put his hand on the Bible and swore to keep Americans safe.