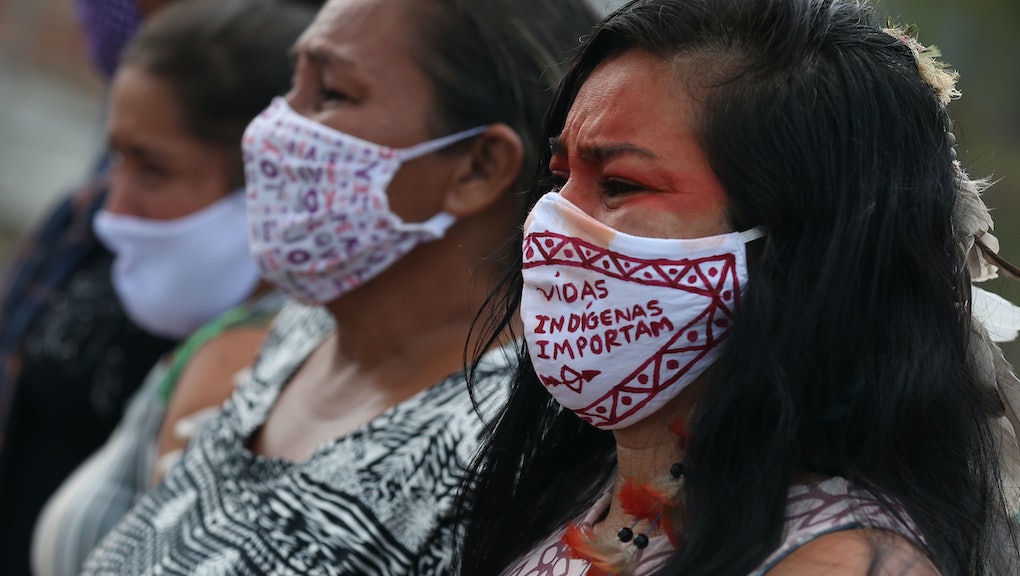 Globally, Brazil is reported to have the second highest amount of reported coronavirus cases behind the United States. With Brazil's cases at about 376,000 compared to America's 1.7 million, though, there's still a big difference in the numbers. But there is one dark similarity between the two countries: Like in the U.S., Brazil's indigenous populations are being ravaged by coronavirus, with some warning that the result could be akin to a "genocide."

APIB's data is higher than the Health Ministry's Special Secretariat of Indigenous Health which has recorded 695 cases and 34 deaths. However, APIB includes a more robust perspective. Per CNN, the Health Ministry only counts indigenous people living in traditional villages while APIB's count includes those who have moved into towns and cities.

Regardless of whose numbers you look at, the reports are staggering and bear similarities to Native communities in the United States. Earlier this month, Mother Jones reported that the Navajo Nation is behind only New York and New Jersey in coronavirus infection rates.

"The indigenous people in the Amazon don't have the antibodies for the diseases that come from outside of the rainforest," Brazilian activist and photographer Sebastião Salgado told CNN. "There is a huge danger that the coronavirus could come inside indigenous territory and become a real genocide."

President Trump and Brazilian President Jair Bolsonaro have had similar approaches to the coronavirus pandemic. Both leaders have downplayed the impacts of the virus and shared misinformation about it. In March, Facebook and Twitter even blocked videos from Bolsonaro because they contained false information.

Historically, Bolsonaro has harmed indigenous communities in Brazil. He has rolled back environmental policies, headed the Amazon's deforestation, and "systematically dismantled all the state organs that enforce environmental protection," Alfredo Sirkis, executive director of the Brazil Climate Center and co-founder of the country’s Green Party, told Reuters.

"Deforestation is an affirmative goal of Bolsonaro. That can be achieved by cutting down trees or, more efficiently, by simply burning large areas that Brazil’s agricultural industry wants to exploit," David Miranda, a federal congressman in Brazil, wrote in The Guardian. "It also means displacing the indigenous tribes that have lived in those forests for centuries: people for whom Bolsonaro has repeatedly expressed contempt."

The parallels between Brazil's and the U.S.'s indigenous populations are stark. Similarly, Trump has no problems messing with Native land, as his plans for a border wall cut right through sacred land. A number of Native communities in the U.S. are also located in rural areas with many lacking access to clean water, electricity, or high-speed internet.

In late March, the federal government approved $8 billion in aid for Native communities. However, the Treasury Department's own incompetence meant it took over a month to begin redistributing funds. “Treasury is not familiar with tribes," New Mexico Sen. Tom Udall (D) told HuffPost for a story last month. "They don’t know how to interact in the appropriate way with tribes and they’re just not getting the job done." Similar funding issues can be seen in Brazil.

Last week, Brazil's Congress passed an emergency plan for indigenous communities, CNN reported. This plan would provide medical equipment, field hospitals, water, and food supplies. But to go into effect, the plan needs approval from both the Senate and Bolsonaro, CNN noted.

Bolsonaro's attitude towards coronavirus deaths in Brazil has been icy at best. When asked about the 474 deaths on April 28, he replied: "So what?" Still, on May 1, a global coalition of actors, celebrities, and artists wrote an open letter to Bolsonaro demanding immediate action.

"Five centuries ago, these ethnic groups were decimated by diseases brought by European colonizers," the letter says. "Now, with this new scourge spreading rapidly across Brazil … [they] may disappear completely."

More like this
So weird how Sean Hannity is super into the vaccine now
By Vanessa Taylor
Trump kept a Gitmo prisoner detained for 5 extra years. Biden has finally freed him
By Rafi Schwartz
The protests in Cuba are about much more than the current economic crisis
By Vanessa Taylor
Stay up to date