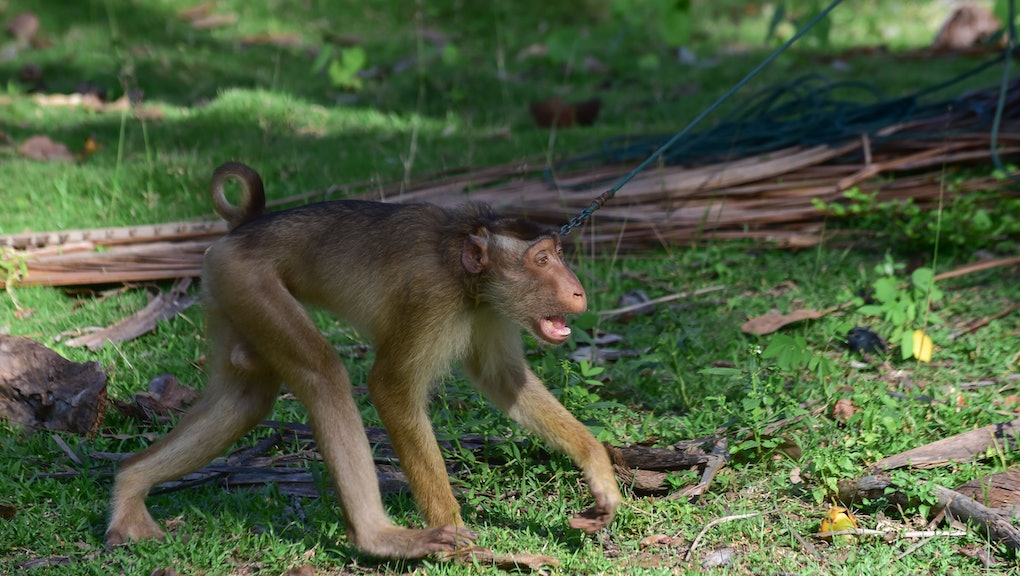 We usually think of exploitative labor practices as human-on-human crimes. Unfortunately for the whole of humanity, big business don’t limit their oppressive and cruel labor practices to homo sapiens. Thai coconut milk company Chaokoh was outed last month for allegedly forcing monkey laborers to pick coconuts, and Costco is the latest retail giant to drop the brand from its shelves in response.

People for the Ethical Treatment of Animals — PETA — released a red flag expose of Chaokoh in August after concluding a rigorous investigation. PETA asserts that the company had confined monkeys to cramped cages, chained them, abused them, and forced them to pick as many as 1,000 coconuts a day on 8 different farms in Thailand, CBS reported. The truly heartbreaking videos released by PETA show monkeys driven mad by their inhumane and outrageous treatment.

“We have made it clear to the supplier that we do not support the use of monkeys for harvesting and that all harvesting must be done by human labor,” Ken Kimble, Costco’s vice president, told USA Today. For its part, Chaokoh issued a statement that they, “do not engage the use of monkey labour in our coconut plantations.” Yeah, okay. It’s really hard to find this kind of corporate posturing credible when the whole coconut industry in Thailand is under scrutiny for its monkey labor issues.

As our collective eyes open to the multitude of human tragedies we are currently facing, it may feel easy to shrug this one off. Clearly, we have a lot of more urgent concerns. This is undoubtedly true, and also, from where I sit, the forced labor of monkeys is just another sad symptom of the cruel virus we call capitalism.

Unfortunately, we need the enthusiastic participation of corporate megaliths to wipe out this particular strain of cruelty. The good news is that, in addition to Costco, some major retail players are saying no to the inhumane treatment of monkeys. Giant Food, Food Lion and Stop & Shop — all owned by Ahold Delhaize — and Cost Plus World Market, owned by Bed Bath & Beyond, dropped the brand in September. Neither Walmart nor Target have commented on whether they will follow suit.

More like this
An ode to Ikea food, light of my post-vaccination life
By Joseph Lamour
Margarita burns: Why lime juice and sunshine don't mix
By Melissa Pandika
Is the Pegan diet really worth all the effort?
By Tracey Anne Duncan
Stay up to date