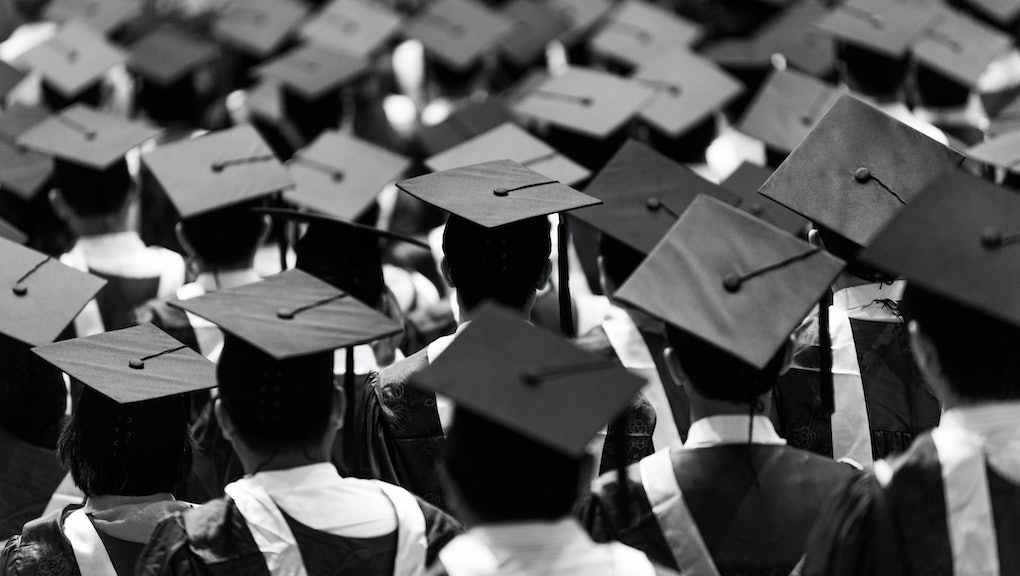 "My student loans have caused me a lot of stress over the past five years; it's actually made me sick," says Perris Allen, a fashion merchandiser in Brooklyn who was laid off in March. She's been struggling to pay back more than $30,000 in student loan debt since she graduated from Columbia College in Chicago in 2015 with a degree in fashion business. Despite getting a job in her industry, the loan payments have been brutal, and the constant anxiety has compounded her problems with medical debt. "I have a lot of digestive problems," Allen says. "I see several different doctors. I can't sleep. And a lot of it they think is caused by all the stress I have."

The student debt crisis has become so acute that even politicians known for caution and moderation have started to embrace dramatic policy responses. Sen. Chuck Schumer (D-N.Y.), the minority leader, has been urging President-elect Joe Biden to forgive up to $50,000 of federal student loan debt for every borrower in the U.S. The proposal, co-sponsored with Sen. Elizabeth Warren (D-Mass.), would not require congressional action. Instead, Warren and Schumer argue that the president has executive authority to eliminate federal student loan debt and waive tax liability.

"It would just completely change my life."

The proposal would wipe out all student debt for three-quarters of borrowers. "It would just completely change my life," Allen tells Mic.

Given congressional gridlock and partisan paralysis in government over the past decades, the idea that a President Biden could just eliminate billions of dollars in debt with a stroke of a pen seems almost like something out of a fantasy novel; a zombie apocalypse seems like a more plausible plot twist at this point. And in fact, Elizabeth Popp Berman, a professor of organizational studies at the University of Michigan who researchers the economics of higher education, was initially skeptical of debt relief programs precisely because they seemed so impossible. "At the time that I first started to hear people talk about debt forgiveness three or four years ago, it just seemed politically unthinkable. It seemed like it was too ambitious a policy to try."

That’s because Republicans sometimes argue that debt relief is outright immoral, because it lets borrowers off the hook. They also say that loan forgiveness disadvantages people who have worked to pay off their loans already. Add to that the fact that there’s hardly consensus within the Democratic Party about what relief should look like, and it seemed like the status quo would win the day.

Things have changed a lot over the last few years, though, thanks in part to tireless efforts by activists to put student loan forgiveness on the national agenda. Warren and Sen. Bernie Sanders (I-Vt.) both ran for president on ambitious student debt relief programs. And during the pandemic, the Department of Education offered a pause on student loan payments: Fewer than 11% of people with federal student loans have been repaying them since March. Suddenly, more comprehensive student debt relief as part of a response to the coronavirus crisis seems feasible.

Berman says she was also initially concerned about the argument, also often advanced by Republicans, that student debt relief might go disproportionately to people who are relatively well off. Jason Delisle of the American Enterprise Institute, for example, has argued that high-income borrowers hold the highest amount of debt, and are thus most benefited by forgiveness programs.

But this ignores the fact that there are large numbers of lower-income borrowers, and they are the one who struggle the most with debt. People who didn't complete a degree, or who attended for-profit colleges, have the most trouble with repayment. So even if they may have comparatively less debt, the benefit of forgiveness for them may well be greater.

Black student loan borrowers, like Allen, are twice as likely as white borrowers to never be able to repay student loans, according to a 2020 study by the JP Morgan Chase & Co. Institute. Historic and ongoing discrimination and inequality means that Black borrowers have a median income that is $12,500 less, or 22% less, than white borrowers.

The stats make it clear that debt relief would have a massive impact on poor and marginalized people, which is why Berman has come around to the position. "To me," she says, "it's fine if you're helping some people who are relatively well off, if you're going to also help a lot of people who are really struggling and burdened."

"I wouldn't have this guillotine hanging over my head."

When I asked on Twitter how people would be affected by $50,000 in federal student loan relief, the responses confirmed that it would be a material help for many people. One person talked about how it would mean their 62-year-old father could retire, rather than working to provide a financial backstop. Others said they could think about buying homes or having children. Some said forgiveness might mean they could actually maybe pay off their loans before they died.

Dianna E. Anderson, a Minnesota writer and nonprofit fundraiser, says that they have tens of thousands of dollars in federal student loan debt. Some comes from their undergraduate degree, and some from pursuing a master's degree in women's studies from Oxford. Anderson was laid off from their development job during the pandemic, and while they have a new book contract, the financial future looks very uncertain.

"To have $50,000 in debt relief would be amazing," they tell Mic. "I wouldn't have this guillotine hanging over my head. I wouldn't have to worry about garnishment of wages if I don't pay, or having 15-20% of my income going to that debt.

They added: "I would have the actual possibility of paying it off. Right now, I'm pretty sure I'm just going to die with this debt."

"If this actually happens, it will automatically raise Biden into a top 10-15 president."

Christopher Silverberg, who works as an assistant editor on television shows in Dallas, says he has $70,000 in student debt. He's also cosigned loans for his brother. "So yeah, my whole student debt thing is a bit of a disaster," he deadpans.

With $50,000 in loans forgiven, "it would be a completely different financial picture," he tells Mic. "I might go back to school; I might pursue something a little bit more creative. I would probably buy a house. I'd have better credit, which would improve my ability to get an apartment or car."

For Allen, the fashion merchandiser, her loans have been difficult for her entire family. Her mother, a Texas state worker, just finished paying her own loans — so now she’s working on loans she took out for her daughter. With the loan forgiveness program, she might be able to get a house. But as it is, Allen says, "we never go on vacations. I only see my family once a year, because that's all I can afford. I only see my mom once a year. It just weighs on you, year after year when you're trying to pay off this debt. And, you know, it's hard to even think of a future for myself."

Freeing borrowers and their families from crushing debt during an economic crisis would allow them to buy homes and cars, to pursue new opportunities, to give money to other people rather than the government. It's a powerful stimulus at a time when the Republican-controlled Senate has been reluctant to help people.

Even though substantial debt relief would provide a needed economic boost, Biden has been hesitant. Instead of offering up to $50,000 in blanket forgiveness of government loans to all borrowers, Biden has pledged to use government funds to pay off up to $10,000 in private loans for economically distressed borrowers, though details on who exactly would get aid under that definition are fuzzy. He hasn’t said much publicly about Warren and Schumer’s proposal.

Berman is disappointed by Biden’s plan. "It's just a gesture," she says. "Federal loans are such a large fraction of the total, and it's not even $10,000 for all the people who hold private loans. It's just for people who meet this particular definition of economic hardship."

Schumer is firmly in the mainstream of the Democratic Party, and he has a lot of influence. It seems plausible that he may be able to pressure Biden to take executive action to back his and Warren’s plan and erase $50,000 in debt for people like Allen and Anderson and Silverberg. If he did, it would be a historic decision. "If this actually happens, it will automatically raise Biden into a top 10-15 president," tweeted University of Rhode Island labor historian Erik Loomis. "[It] would be an amazing move that transforms the lives of millions of Americans."

Over the last decades, we have created a society in which education no longer expands students' worlds, but instead, via debt, crushes and limits them. Biden has the power to start to change that. He should use it.