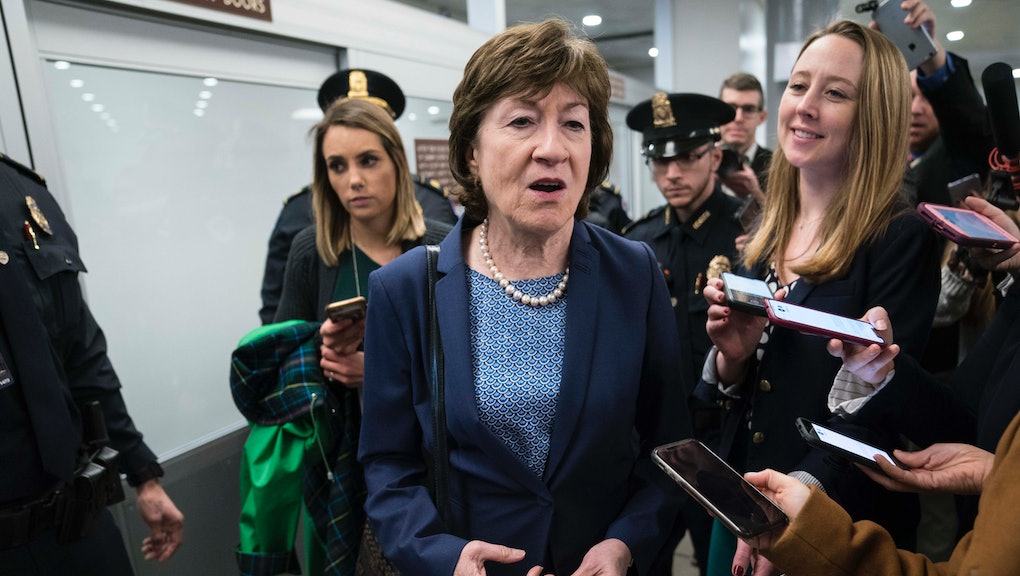 Could Democrats take the Senate in November? A new poll says yes

A new poll by Public Policy Polling found that in the four battleground states of Arizona, North Carolina, Maine, and Colorado, Democratic Senate candidates lead their Republican rivals by at least 4 percentage points. This is significant considering that the four incumbent Republican senators — Susan Collins of Maine, Thom Tillis of North Carolina, Martha McSally of Arizona, and Cory Gardner of Colorado — all bet their re-election hopes on siding with the Trump administration, most notably by voting to acquit President Trump during his impeachment trial earlier this year.

The poll found that Collins challenger Sara Gideon leads the four-term senator with 47% support to Collins's 43%, a sharp contrast to a poll conducted last year, which found Collins safely situated for re-election. The research shows that Collins's approval rating among voters who sided with Hillary Clinton in 2016 has dropped significantly, likely indicating that moderate Democrats in the state are starting to reconsider supporting the incumbent.

Collins, whose disapproval rating is now at 57% in Maine, had previously staked her candidacy on being one of the swing Republican votes in the Senate. She has voted with Democrats in high-pressure situations, most notably in 2017 when she voted to protect Obamacare, but she has also shirked her "moderate" reputation such as when she voted to confirm Supreme Court Justice Brett Kavanaugh in 2018.

In Arizona, Mark Kelly, a Democrat running against McSally, has a 5-point lead. McSally was appointed to fill late Sen. John McCain’s seat, winning entrance to the upper chamber despite losing her election bid in 2018. She is closely aligned with Trump and has a disapproval rating in the state of 46%. McSally opposes abortion access and gun restrictions, which are important to voters this election cycle — the latter especially notable given that Kelly’s wife is Gabby Giffords, the former U.S. congresswoman who survived a mass shooting.

In North Carolina, Cal Cunningham, the former soldier who easily won the Democratic primary race on Super Tuesday, is leading the Republican incumbent Tillis 46% to 41%. Cunningham previously ran for Senate in 2010 and lost, but with the political landscape dramatically different this year, November could be his chance. According to the North Carolina Democratic Party, Tillis has the lowest approval rating of any Republican senator up for re-election.

Lastly, in Colorado, former presidential candidate John Hickenlooper is taking on Cory Gardner; the former governor leads the incumbent by a whopping 13-point margin, 51% to 38%. Hickenlooper is running on a platform that seems to resonate with Democrats this year: access to affordable health care, combating climate change, and taking on Senate Majority Leader Mitch McConnell. "I don't think Cory Gardner understands that the games he's playing with Donald Trump and Mitch McConnell are hurting the people of Colorado," Hickenlooper said in his announcement video. Gardner has sided with McConnell in more than 90% of his votes in the Senate, including voting to repeal Obamacare and to cut Medicaid funding.

If Democrats are able to flip the Senate in November and claim a simple majority of seats, they’ll be able to more effectively influence Trump's policies should he win a second term — not to mention elevate a possible Democratic president’s agenda.

The Maine Senate primary is June 9, with Colorado following on June 30; the primary for the Arizona special election for Senate is August 4. After that, we'll have to see what happens in November.