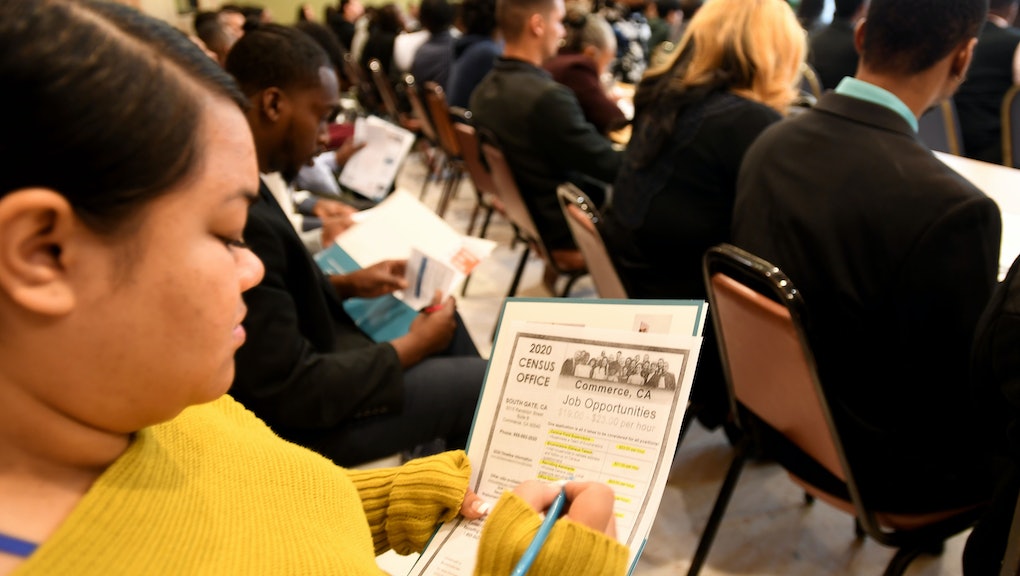 The first census, conducted in 1790, sent around 650 government representatives door to door to individually count each "free person," excluding "Indians not taxed," and "three-fifths of all other persons" i.e. enslaved Africans. The effort was made to fulfill Article I, Section II of the Constitution, which says that every 10 years we are to tally how many people are living in the country. This year, for the first time ever, the majority of counting will be conducted online, as the 2020 census is the first one that has been conducted during a global pandemic. (In 1920, the census was delayed several months due in part to the aftermath of the 1918 Spanish Flu outbreak.)

The confluence of circumstances leaves advocacy organizations and census officials in a bind: How can they get an accurate count of populations who are already historically hard-to-count, without being able to do in-person outreach en masse? Census partner organizations are worried that coronavirus will make hard-to-count populations, like English-as-a-second language speakers, undocumented immigrants, and those without internet, virtually impossible to tally accurately.

An accurate count is crucial, because census data is used to apportion government resources. Each non-response or undercount equates to thousands of dollars in lost funding for social safety net programs. Hard-to-count residents tend to be people of color, poor, undocumented or people for whom English is a second language — in other words, residents who might benefit the most from federal aid and who have historically been disregarded.

Even before the coronavirus outbreak, the Census Bureau was planning to have most respondents fill out their census form online. Now, officials are hoping that the variety of self-response options available — online, by mail, or by phone — will means that they won't have to rely as much on on in-person enumerators, who generally follow up with non-respondents and hard-to-count folks. Last month, the Census Bureau announced that it would delay in-person enumeration, where canvassers physically knock on people’s doors, like the counters of yore, to ask the nine survey questions, in light of coronavirus.

Additionally, in the middle of March, right around when counting efforts began, the Census Bureau announced that it would push back the calendar for enumeration, postponing the very last day a person can be counted by two weeks, until Aug. 14. The hope is that the change will give officials enough time to gather and present the results to the president by Dec. 31.

But online census access isn't sufficient for some areas of the country. The Central Valley Immigrant Integration Collaborative, based in California, is one of thousands of partner organizations on the ground in states across the country that are responsible for making sure that their communities are accurately counted, motivated by the promise of federal funding for programs such as the Children’s Health Insurance Program, the Supplemental Nutrition Assistance Program (SNAP, also colloquially referred to as food stamps), and nearly 300 other federal operations, all of which are predicated on population count. CVIIC's work in California's Central Valley region is crucial because this area is home to traditionally undercounted populations, including immigrants and those who might not have internet access at home.

"In the first week of April we had to cancel 20 outreach events," Jesus Martinez, the executive director of CVIIC, tells Mic. He notes that the organization has had to cancel its legal services workshops, which specifically is a problem given that those events function as one of the main ways immigrants and those living in rural communities receive critical information about the census, including how and why to fill it out and what questions will be asked.

"We had to halt canvassing — our whole strategy was about meaningful face to face interaction."

While Martinez says the move to collecting information over the internet was well-intentioned, he notes that "doing things online is not as effective as doing things in person," especially given the number of barriers the Central Valley community faces. “Many families do not have access to internet in their home,” Martinez says — and even if they have internet access through their smartphone, it's not easily navigable.

Outreach by other organizations in the area was similarly disrupted by coronavirus. "It's unfortunate that COVID-19 started ... the day before the self-response period started," says Cindy Quezada, who is leading census work for The Center at the Sierra Health Foundation, focused on the San Joaquin Valley area of California's Central Valley. "We had to halt canvassing — our whole strategy was about meaningful face to face interaction."

Mariana Salazar, the Census 2020 Project Director for United Way Texas, tells Mic that the state legislature opted not to fund its own get-out-the-count effort, and that United Way and other grantees are now having to pivot strategies in order to ensure that every resident is reflected in the census. "It’s just really sad ... [the] folks that are experiencing the biggest hits are those that we’re trying to count," she says. "It would be unfair to have an inaccurate census inform funding."

It’s hard work, combating an undercount, and it requires years-long coordinated effort to get out information about the census and building a program from the ground up. Eric Jeng, director of outreach from the Nevada Asian Community Development Council, tells Mic that the organization has been working for more than a year and a half to coordinate census outreach efforts in order to "get out the count."

Through PowerPoint presentations and community events, Jeng educates others on the importance of answering the survey questions, namely by hammering home that public goods and services are all dependent on census data. Jeng also debunks myths, particularly about the “citizenship question”; in early 2018, the Trump administration said it would add a question to the census asking individuals to note their citizenship status, leading advocates to argue that such a question would discourage immigrants afraid of giving that information to the government from filling out the census.

In 2019, the Supreme Court ruled that the question was unconstitutional, and it does not appear on the 2020 census, but the fear sowed by possible addition lingers in immigrant communities and communities of color.

That's why in-person outreach is so important — it allows community workers to explain to a skeptical public why filling out the census is beneficial to them. But in Nevada, all outreach events have stopped, including a part-community event, part-census education “night market” that was supposed to reach 11,000 at once.

The census isn’t just about making sure the numbers are correct, either. It’s about being recognized, says Emily Zamora, the executive director of Silver State Voices, an organization that aims to foster civic participation of Nevadans. "I just also feel that for many folks, just being able to say that they’re seen for the first time in a civic participation way [is valuable]. Folks who may be under 18 and don’t have the ability to vote, they can fill out the census with their family," she tells Mic.

Put plainly: The number of people counted is equal to political power in Washington.

Take for example the national Asian American population, which has grown by 75% in the last two decades. Asian American Pacific Islanders (AAPI) make up 330,000 of Nevada’s population of 3 million, Jeng says, so for him, the effort to make sure that AAPI Nevadans are sufficiently counted isn’t just a matter of accuracy, but also one of ensuring that the community gets the representation — and the money — it deserves. In Nevada, the undercount estimate for the 2010 census was around 55,000 people. Less funding for the whole state necessarily means decreased support for vulnerable and already underserved populations; that's more than $1 billion in lost funding, Jeng says, which could have gone to important K-12 education initiatives, Pell Grants, and school nutrition programs.

Overall, the past two censuses failed to count nearly 1.5 million people of color, according to the Urban Institute. This year, the organization predicted the census will fail to count up to 4 million people, with people of color and children at the greatest risk of not being counted. But that projection was produced pre-coronavirus; now, Rob Santos, the vice president and chief methodologist at the Urban Institute, tells Mic that 4 million seems like a "low estimate."

An accurate population count of a census tract also determines how many members a state is granted in the House of Representatives; census data also helps determine how House districts are drawn. Put plainly: The number of people counted is equal to political power in Washington. Because of the 2010 census count, Nevada received an additional congressional seat, Zamora says. (Congressional seat apportionment is more about population growth than an exact population count, which is why California, the largest state in the nation, is actually predicted to lose a seat this year.)

In past census years, the self-response rate has topped off at about 60%, with the other 40% counted via follow-up visits from census enumerators. Shelter-in-place and social distancing orders stemming from the coronavirus outbreak, which likely won’t let up for weeks or months, will make the in-person enumeration efforts difficult, if not altogether impossible.

That's why Santos doubts that this year's census will yield an accurate count — even with the opportunity for people to respond online. "Some type of bold action is needed, given where we and the country are in regard to the crisis with COVID-19," he says, noting that hard-to-count communities tend to be hardest hit by the crisis.

Quezada agrees. "There’s a total overlap. The people who have been hardest hit are the ones who are traditionally undercounted," she says. It's a vicious cycle, too: Quezada is worried in particular about the hard-to-count communities where formal educational attainment is not high. These populations have been hardest hit by coronavirus — and also generally rely on publicly-funded services, like schools.

The goalposts for mitigating the spread of coronavirus change every day based on new data, but the aim of the census remains the same. As the Census Bureau says: Count each person "once, only once, and in the right place."

More like this
Vaccines are good. Threatening to evict someone over them is not
By Rafi Schwartz
After 9/11, the U.S. leaned into security theater. Here's how that's playing out 20 years later
By Vanessa Taylor
Insurrection enthusiast and acid trip 'Batman' villain Roger Stone got served court papers on live radio
By Rafi Schwartz
Stay up to date