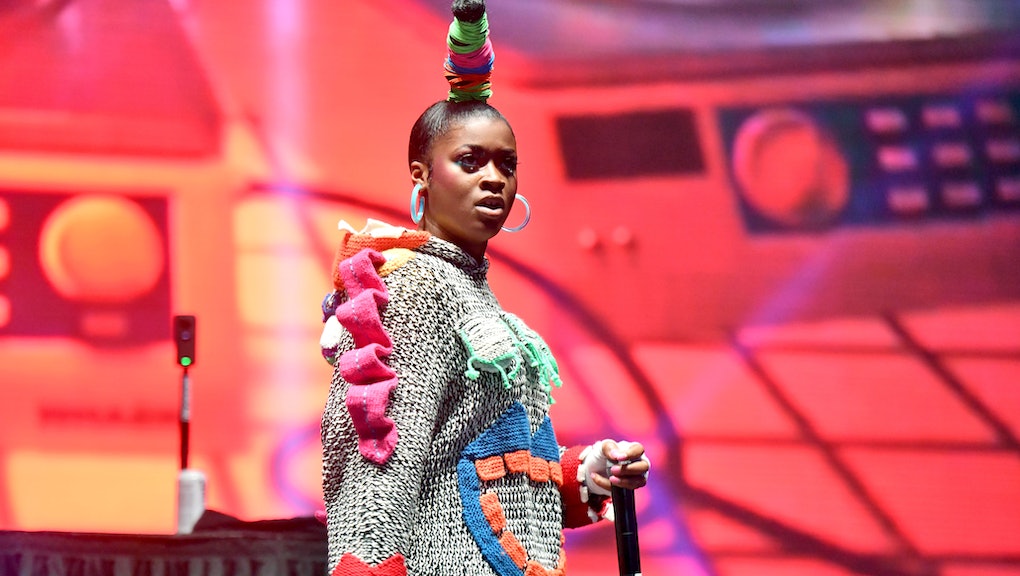 Creativity, according to Tierra Whack

Tierra Whack’s aesthetic, like her imagination, is deliciously maximalist.

Whack, like any self-respecting artist with enviable style (see also: Rihanna), has also dabbled at creating her own designs, most recently with a surprisingly restrained merch collection, some of which was available at Urban Outfitters before swiftly selling out.

Whack’s sartorial swagger can be credited in part to stylist Shirley Kurata, who has worked diligently with the musician to create a showcase of looks that reflect Whack’s vibrant inner world. For their most recent collaboration, the duo partnered with Adobe for What Whack Wears, a contest that allowed fans as young as 13 to submit to their own designs through Adobe’s suite of creative apps. The winning design — chosen by Kurata and Whack — will actually be worn on stage by Whack on her upcoming tour. The fan will also get a matching fit for themselves.

We spoke with Whack about her style, her creative process, and how she deals with the inevitable doubts that arise with self-expression. It turns out, Whack’s entire approach to life springs from a refusal to do what’s expected.

On being inspired by the creativity of the youth:

Honestly, I have this thing where, even ‘till this day, I've just never really wanted to grow up. I just remember having conversations with my friends in school and they would be like, "I want to be 21 again, I want to be 18 again." And I would just be silent and be like, "I enjoy being a kid. I don't want any responsibilities. I don't want to pay the bills."

I always kind of envy children. Even with my little sister, my little brother — when they're going through stuff that I went through, I'm just like, "Wow." They think so deep, so crazy. I'm just like, "If only you knew. Growing up, being an adult — it's a trap!"

On her personal style:

It's just all about a mood. I know by my next appearance I'm like, "Yeah, I've got to figure out how to knock this plaid look out." It's something that's been in my head but I just haven't been able to hone in on it. It's just random ideas I have and then it just has to make sense for me in my head.

I honestly don't think about it. The most recent talks I've had with people, everybody's making it about fashion. But I'm like, "Yo, I never had a dream of being a fashionista or a fashion designer." It literally was just a natural thing. I just happened to dress cool.

On being a Black woman in the still-too-white world of fashion:

Honestly, just rip down the boundaries, just break the box. I don't know the rules and, to me, there isn't any rules. Everyone should just go in with that mindset. That's how I live. That's how I've been living since I was a child. I just continue to lead with that and I think that's gotten me pretty far.

On dealing with self-doubts that arise during the creative process:

I have a pretty fab, crazy supportive team. So it's good to just keep people that you trust close to you so they can give you that reminder when you need it. You got to be able to boost yourself up when you're at your low, but thank god I have my team. I know with one phone call they just remind me of everything that we've done and everything that's coming.

On finding inspiration in a higher power:

I'm definitely spiritual. I pray all the time. I pray when I need something, I pray when I don't need something, I pray just to say thank you. So I'm just always trying to keep that good energy. I'm not just praying for myself, I'm praying for everybody. Now you’re added to my prayers. I'm serious. I want good for everybody. I've always felt that way. I just try to share and show love and be the best me I can be.

On the ideal conditions to create music in:

I like to start early. I like to work really early. I'm not one of the artists that goes in super late and is there 'till... Well, sometimes I am there 'till four in the morning, but as long as I start early then I'm good. I just have to make sure I had a good breakfast, whether it was just a smoothie or fruit or whatever.

And I just have to be … I don't want to say in a good mood, because sometimes in my bad moods, I get really good songs, too. I just have to get up, do what I have to do, go to the studio and just vibe. And sometimes I'll just spend a day in the studio just reading or looking at magazines and books or watching a TV show or an old film. I do things that I like and then we'll be making music as we're doing different stuff and it just all comes together.

On her writing process:

We're all sitting, we're making the beat, adding the sounds and everything. And I start humming, I get a melody, and then the first solid line I get, I'm like, "Okay." I'm just following my own lead almost and shadowing myself. I'm just taking stuff one step at a time and it eventually all comes together.

With every song, I'm trying to convey a different message. I'm just making sure that whatever I'm talking about in that song, that I just really own it and give my all.

On how she tends to her wellbeing:

I've had some time off but time off isn't really time off, so [caring for myself means] just less traveling and less interviews. Honestly, just praying more, having time to think to myself, being by myself and eating better, going to the spa, getting a massage, getting nails. Just the regular little things that you can't seem to squeeze in … these things that make you happy. I've just been really on that. I do everything I need to do for myself in a studio and then I'll have a good day. I've just been really just making sure that I'm taking care of myself.

On whether fans' expectations affect her:

Honestly, no, because I keep releasing and dropping everything. I'm just going to be learning more and more. I was talking to someone yesterday and I was telling them I've been making some really good songs that I'm really proud of and that means the most the most to me.

Sometimes I have these feelings or thoughts where I listen to or I see something or I hear something and I'm like, "Yo, I wish I made that." But then when you actually make something and you can't believe that you made it, it's not explainable. I never had a child, but I could imagine it being like having a child. Like, "Wow, I made this little person, this little thing. This is my creation." And just being so proud and raising them and growing them up and it's just an amazing feeling.

Because [Whack World] — that was one thing. I have so much more, and I'm just ready to put it all together and give it to the world.

More like this
We're obsessed with Lil Yachty's gender neutral nail polish
By Kara Weisenstein
The creators of MF DOOM tribute comic on his legacy: "DOOM is pop culture"
By William E. Ketchum III
T-Pain just realized he accidentally swerved hundreds of celebs
By Kara Weisenstein
Stay up to date