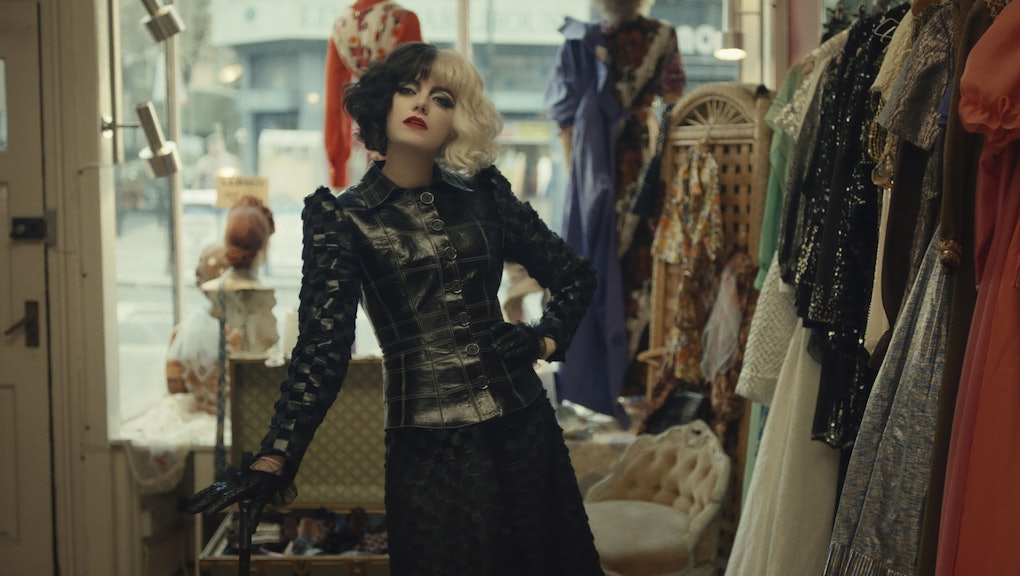 There is a scene early in Cruella’s third act in which Emma Stone, as the titular antihero, stands in front of a fountain her late mother once promised to take her to, which Cruella has treated in the years since her death as a surrogate gravesite. Reeling from a revelation about her past, she talks at the fountain — at her mother’s ghost — in fits and starts that are at turns defiant and meek. Stripped from the 130 or so that surround them, these few minutes suggest a bracing movie, one with extravagant costumes that clash against a grey London and a central figure who is not an invulnerable madwoman, but something smaller and stranger, captured by director Craig Gillespie and cinematographer Nicolas Karakatsanis in an entrancing handheld that trembles just a bit, like the character’s voice.

This scene is maddeningly unrepresentative of the film around it. Cruella, the live-action prequel to 101 Dalmatians that cost a reported $200 million to make (and much more to market), is the kind of inevitable mediocrity that dominates the new studio and streaming systems, a fur coat stitched by fussy committee. In many ways, it recalls Gillespie’s last feature, 2017’s I, Tonya, about the figure skater Tonya Harding. Trying at once to be a close-read biopic and a mockumentary about the advent of 24-hour news, that film is sloppily conceived yet overdetermined. This one moves in a straighter line, but is marred by a similar tonal incoherence and the type of indefensible pacing that draws out a story while refusing to ever let it breathe.

Where many equivalent properties aim to mint new stars or go without them entirely, to save money and ensure that the franchise will survive if they leave, Cruella’s marketing is staked entirely on Stone, the Best Actress winner who appears alone on its poster. And yet the film nearly squanders her performance, the only thing that comes close to saving such a drab bit of corporate maneuvering.

Cruella is not a superhero movie per se, though it, like seemingly everything else, sticks closely to those conventions. While the Marvel franchise (which Disney also owns) is the industry leader and defaults to a jokier tone, it was Christopher Nolan’s The Dark Knight (2008) that triggered the salivation of executives and audiences for “gritty,” “adult” adaptations of comic books and similar source material for children. Hollywood responded quickly, kickstarting production on dozens of competitors and rearranging the Oscar categories to give them a highbrow sheen.

But the town took the wrong lessons from that movie, fetishizing a self-conscious “darkness” in place of anything resembling drama. What made The Dark Knight — at least its first two acts, before it becomes a bizarre defense of the Patriot Act — good was Nolan’s insistence on a tactile, practical approach. After all, men who dress up in costumes to fight crime and villains who wear clown makeup while strong-arming the Italian mob are so much more unsettling if they exist in our world rather than one that has distorted itself to accommodate them.

Gillespie’s Cruella almost never feels like it’s happening to living people. It follows Estella Miller, the young child of a single mother in rural England (played in these early years by Tipper Seifert-Cleveland), who we are told is both brilliant and an incorrigible rebel, though we are not shown evidence of either. Estella’s mother pulls her out of school before she can be expelled, packs all their belongings in her car, and sets off for London, where she hopes Estella can pursue her dream of being a fashion designer. But on the way, she stops at an imposing manor to ask for financial help from a stern, unseen hostess. While snooping on the party and looking for her beloved pet dog, Estella believes she inadvertently causes the hostess’s trained dalmatians to send her mother toppling off a cliff to her death.

Estella stows away on a train headed for London, where she falls in with two street kids her age, living in an abandoned warehouse and off of petty thievery and schemes. This continues into her adulthood, when Stone takes over. (Her friends are played as grown men by the British actor Joel Fry and by the wonderful Paul Walter Hauser, who starred in Clint Eastwood’s Richard Jewell but is at one point here relegated to visual jokes about how many pastries he can eat.) Estella gets a janitorial job at a revered department store, where her boss scoffs at her interest and initiative until one night, drunk and alone in that store, Estella radically remakes a window display before passing out under the mannequins. As she’s about to be fired, in walks “the Baroness,” a powerful fashion designer played by Emma Thompson, who is impressed by the display and poaches Estella for herself.

Of course this is the woman who Estella’s mother went to see before the move to London; of course she has the prized necklace that young Estella was told is her family heirloom. And of course Estella quickly becomes a favorite of the Baroness, who begrudgingly admires her designs and appreciates her deference. But with these revelations, Estella becomes fixated on revenge, adopting the Cruella persona and upstaging the Baroness at fashion shows and society events with an increasingly elaborate series of stunts, all while continuing at her job, her boss apparently oblivious.

Thompson is a game performer; it’s not her fault her role is a photocopy of a photocopy of Meryl Streep’s in The Devil Wears Prada (2006). Cruella would grow almost unbearably tedious were it not for its star. Stone’s career has been strange — her filmography is much thinner than her fame would imply. But at her best, she captures the energy of old screwball comedies without the pretense that often comes when actors try to evoke long-gone eras; she has a deep voice and comically expressive eyes, and modulates each in a thousand tiny ways to seem ahead of or behind her counterparts, often in the space of a single scene. She single-handedly turns the end of Damien Chazelle’s La-La Land (2016), a musical with no good songs, into a wrenching meditation on love and the casting process, and did her best work in the Greek director Yorgos Lanthimos’s The Favourite (2018), burning her hand on lye and fucking the Queen.

Unfortunately, one of the things she ports into Cruella from The Favourite is a very bad British accent. In Lanthimos’s film, this is forgivable — the American star giving a slyly comic performance in a palace where she does not belong — but here Stone makes a point to speak differently when she is the kind, thoughtful Estella versus when she sinks, first temporarily and then for good, into the Cruella persona. Because she never gains any confidence or credibility as a Brit, these shifts scan more as bad voice work than as character choices. And yet the character is rendered with a depth greater than the script deserves.

Beyond the fountain scene, the elements of Cruella that work are directly related and come squarely in its middle. The series of escalating stunts that see Cruella trapping the Baroness inside her limousine while she poses on top of it, or where she backs up a garbage truck and dumps its contents — which turn out to be the train of her dress — onto a red carpet, and et cetera, are smartly conceived and electrically staged. These incidents are documented by a reporter (Kirby Howell-Baptiste) with whom Cruella has a friendship of mutual benefit, and who writes glowingly yet cryptically about this mysterious figure disrupting the party circuit. Howell-Baptiste is given little to do, but the notion that Cruella’s is a myth created through careful plotting and exaggeration is more compelling than if she were simply unhinged and flatly alien. What’s more: Stone brings to this section of the movie the correct kind of abandon. This is a character who grew up homeless, lifting wallets on street cars to feed herself; breaking etiquette at a runway show is light work.

Two technical elements plague Cruella, exacerbating the rampant issues with its script. The first is its soundtrack, which is obvious, gaudily expensive, and absolutely suffocating. The movie’s marketing has staked it as a “punk” take on 1970s London, and while Cruella and her friends seem to invent the genre offscreen, the songs here run the gamut of ‘70’s radio. The Baroness, for instance, is introduced not through any sort of real characterization but by The Doors’ “Five to One.” That scene, like countless others, functions practically as B-roll under the music cues, which follow one another in rapid succession and provide jolts of recognition but little else, at the expense of the action on screen revealing any real texture.

Speaking of texture — aside from a handful of other instances, the cinematography and CGI are revolting in the way nearly every studio movie is today, trapped in an uncanny valley of computerized city blocks. The climax, which takes place back at the manor where Cruella’s mother was killed, is played against a sky so drearily, artificially grey that it looks like a bad video game. To cite Nolan once more: The night after I saw Cruella in one theater, I watched Tenet in another. The latter is a film about time-traveling secret agents who crash airplanes into buildings, and at quite literally every turn it looks more believable than Cruella, which is mostly about people in rooms having charged conversations. There is something to be said for high stylization and camp, but Gillespie and Karakatsanis achieve neither here, and it is not clear what, if anything, they were pursuing in the way of visual style.

Despite all of this, there are hints of a more interesting movie underneath. Critics have cited the fact that this Cruella does not in fact kill dalmatians, skinning them to satisfy her fashion tastes, as a necessarily Disney softening of the character (the New York Times calls Cruella “harmless” and Vulture argues this is part of a misguided attempt to make her “aspirational”). These charges are likely true, but they — perhaps inadvertently — make for a more interesting character, one Stone works to reveal in tiny ways. There are times, when Cruella is verbally abusing her lifelong friends, that Fry’s character tries to level with her in quiet corners of the warehouse they share. In these scenes, Stone plays Cruella as nervy and insecure, a victim of terrible suffering willing herself into villainy. During one such exchange, Stone’s face even suggests that she has broken with reality — an impression the character seems to recognize and mask almost immediately. Yet we are not invited to stew in the implications of this, as there are Electric Light Orchestra songs to get to.

Even in the fleeting moments when Cruella succeeds, it’s hard to shake the question of what it is, exactly, we’re doing here. Hollywood has apparently decided that these sorts of intellectual-property plays — ideas that would have scanned as parody of the industry only a few years ago — are the only thing likely to turn a profit, and are investing in them so heavily as to make it so. (If Cruella is not a runaway hit, that will be spun as evidence that audiences simply do not want to go back to theaters, and that they should be shuttered or sold for pennies on the dollar to the studios.) But as ridiculous as the project might seem at first glance, it is exactly what it appears to be: a movie hellbent on catering to absolutely everyone, a waste of time and energy for its star, a shiny cog in a self-perpetuating machine.