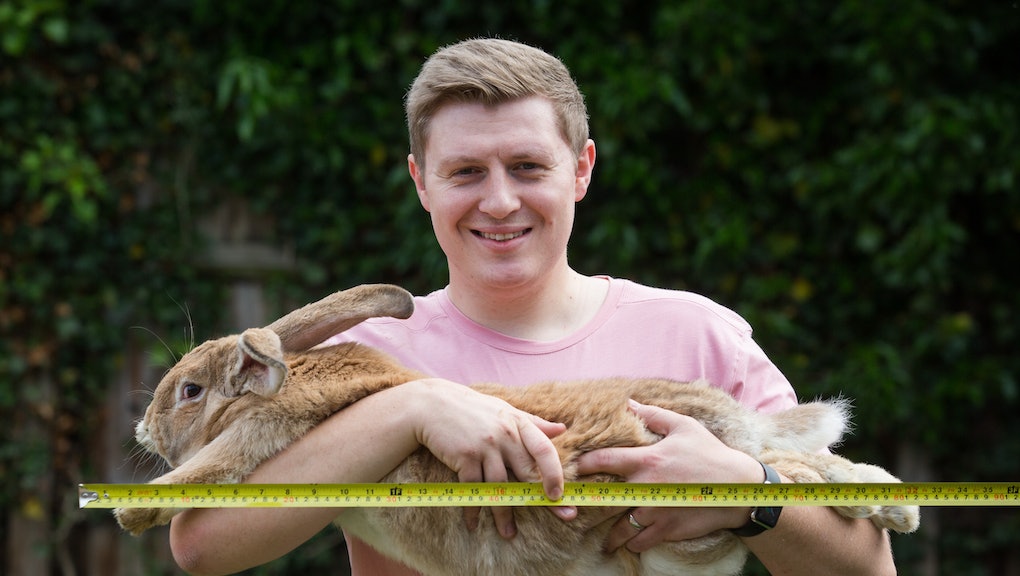 Darius, the world's longest bunny, has been stolen

The whole world is in a state of utter chaos. There is somehow still a pandemic happening. The entire planet is on the brink of ecological collapse as climate change threatens to render the Earth uninhabitable. There is political unrest and upheaval throughout the world. And while we've had our attention on these lofty, long-term challenges, we took our eyes off the ball and some cruel monster has taken advantage: Darius, the world's longest bunny, has reportedly been stolen.

On Monday, Darius's owner and caretaker Annette Edwards alerted the world that the rabbit had been stolen from his home in Worcester, England, a village with a population of about 100,000. "A very sad day. Guinness world record Darius has been stolen from his home," she wrote on Twitter. "Darius is to [sic] old to breed now. So please bring him back." Edwards initially offered a £1,000 reward for Darius' return, which she has since increased to £2,000 (about $2,750) as she has grown increasingly concerned about the bunny's well-being.

Darius is the type of animal that makes your Grinch-like heart expand. Measuring in at 4 feet and 3 inches long, according to Guinness World Records, the Continental Giant is the longest bunny on record. (If you're asking if there is a bunny larger than Darius despite perhaps being shorter, Guinness does not record weight records for animals to discourage people overfeeding their animals for the sake of fame and notoriety. That said, Darius reportedly weighs about 50 pounds, according to The New York Times, which may not make him a record holder but does make him an absolute unit.)

In addition to being incredibly long physically, he's also longer than expected in the metaphysical sense. Most Continental Giants have an average life expectancy of about four to five years. Darius is 11, according to The Telegraph, more than doubling his expected lifespan. In a 2019 interview with the CBC, Edwards described Darius, then 9 years old, as "an old man" with a tendency to "be a bit grumpy," but said "he hasn't lost his sparkle." She also said Darius "still likes his lady friends," implying that this rabbit fucks, which is a thing that you have to deal with now.

When he was a younger man, Darius used to tour the world, making stops to be admired for his size and get pets from kids. (Edwards would travel with him and often dressed up as Jessica Rabbit, and reportedly spent more than $160,000 in plastic surgery in order to achieve that look, which feels like it requires a whole lot of unpacking that we just do not have the time for.) According to a 2010 report from Today, Darius once traveled with an agent and a bodyguard and had a $1.6 million insurance policy on him. But in his old age, Darius takes it much easier. He's also on a special diet, per The Telegraph, and could run into health issues if he's not kept on it — making his return all the more dire.

If you have any idea where Darius may be, please do your part and get this giant rabbit back home. We might not be able to solve the coronavirus pandemic or climate change, but dammit we can solve the case of the missing long bunny.

More like this
Trump kept a Gitmo prisoner detained for 5 extra years. Biden has finally freed him
By Rafi Schwartz
The protests in Cuba are about much more than the current economic crisis
By Vanessa Taylor
The U.N.'s human rights chief just called for reparations on a global scale
By Vanessa Taylor
Stay up to date