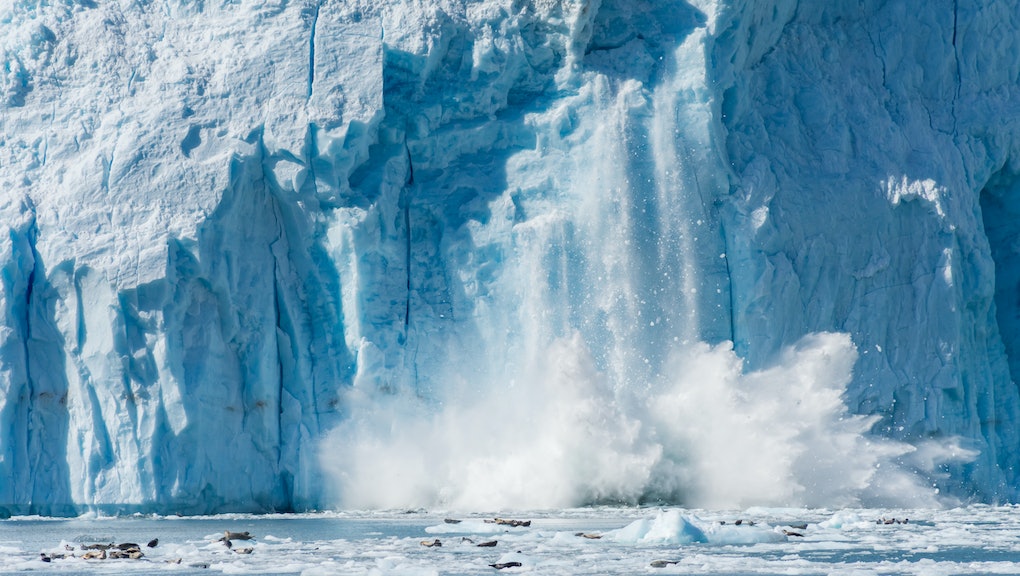 We often think of the many threats that face humanity as singular challenges, perhaps locked to the region that is experiencing them. But according to scientists at the international research program Future Earth, these threats aren't just a problem in isolation. We run the risk of these problems combining and compounding the problems that we face. In a recently published report, the experts warn that the interconnection of a number of ecological threats could result in in a potentially devastating series of events that would cascade into a global systemic collapse.

Over the course of the 50-page report, more than 200 scientists from around the world looked at current threats facing humanity — everything from extreme heat waves resulting in scorching and deadly temperatures throughout the Middle East to water scarcity in Latin America to the threat of increasingly dangerous hurricanes hitting islands in the Atlantic to the fact that scientists now believe that we are at the outset of just the sixth ever mass extinction event — and what might happen should those scenarios start to pile on top of one another. When these events occur, the researchers note, we often respond to them as individual events. But in actuality, they should be approached as systems — connected occurrences, typically exacerbated by human-caused climate change, that may feed into each other and create an even worse outcome.

To understand just how this type of devastation can add up, one needs to look no further than the bushfires in Australia. Present in that tragedy is an example of how a failure to treat varying symptoms of climate change as part of a greater, connected system can result in dangerous conditions feeding into each other.

For years now, the country has experienced droughts. The problem peaked in 2017, when Australia experienced the driest season on record in over 800 years — and the conditions barely improved in the years following. The lack of rainfall has left many of Australia's streams, rivers, lakes and dams at their lowest levels in decades. Some studies have suggested that there has been as much as a 50 percent drop off in streamflow compared to what was available in the 1990s. That lack of rainwater resulted in a new problem for much of Australia's rural population: water shortage. Towns and cities located in central Australia, away from the coasts and major population centers, have been forced to ration their water — pushing citizens to abandon everyday tasks like doing the dishes or laundry or taking showers. Many of the towns across the country are facing the threat of Day Zero — the point at which the water runs out entirely — with some projections pointing to water sources completely running dry later this year. While there is no opportune time for a water shortage, the timing of this particular one in Australia could not be worse. Over the course of 2019, the country started to experience out of control bushfires that burned without halt for months on end. An estimated 42 million acres of land have been destroyed by the uncontrolled flames, more than 5,900 buildings have been leveled and at least 34 people have lost their lives as a result of the fires. The situation has been increasingly devastating for Australia's wildlife. An estimated one billion animals have died because of the fires. Making the situation even more dire was the fact that, right in the midst of one of the worst bush fires on record, Australia started to experience one of the hottest heat waves in the country's history — reaching temperatures of 105 degrees Fahrenheit and higher at times. Now that rain is finally coming to some regions of the country, it has found itself with a new problem: floods and mudslides that run the risk of damaging soil and contaminating the already dwindled water supply.

If the country of Australia was facing one of these difficult ecological situations at a time, it would be challenging to address. But the country no longer has that luxury — it is experiencing them all at once, and it is difficult not to see how each individual condition worsens the overall situation. Heat waves exacerbate droughts, which result in water shortages that push towns to the point of crisis, which leaves these regions high and dry (literally) as bushfires close in, leaving them with a limited supply of water to fight off the flames. Ignoring the interplay of these conditions only serves to allow them to feed into each other — and allows this situation to create potentially worse outcomes in the future, as well. It is expected that the long-term effects of the bush fires could end up contributing to more extreme weather events by pumping more carbon into the atmosphere. Australia's government for decades has largely ignored the role of climate change and the weather events that it has delivered to the nation. It is now experiencing the worst case version of what happens when all of these conditions run head-first into one another.

The experts at Future Earth warn that the events in Australia won't be the last time that we see these seemingly individual conditions collide with one another. Their warnings are backed by prior studies that have found that extreme weather events are increasingly occurring together rather than in isolation. A 2018 study found that by 2100, nations will be dealing with as many as six climate catastrophes at once, leading to new challenges in how we address the problems. Researchers responsible for the study also warned that focusing on just one or some of these conditions could result in "masking" the impacts of other events. That would result in a failure to accurately assess these threats and could lead to inadequate resources and means of addressing them as they occur.

If there is good news to find in a report warning of a potential global systemic collapse at the hands of cascading extreme weather events, it's this: while these conditions can feed into each other to exacerbate problems, good policy can likewise create positive outcomes across multiple areas, fending off these threats. As an example, government-led effort to improve wetlands could improve overall biodiversity; reduce the effects of pollution in water and soil; and improve water security. This would put us in a better position to fend off other threats like drought or storms that may otherwise threaten to destroy wetland habitats with flooding and other detrimental conditions.

While the policy may be controversial to some, proposals like the Green New Deal start to get to the heart of this issue, acknowledging that many ecological conditions are connected and do not occur in a vacuum. These types of comprehensive policy positions also work to address the overarching threat of human-caused climate change. While climate change cannot be tied directly to any singular weather event, many scientists believe the conditions created by greenhouse gas emissions have worsened many of the weather events that we have experienced in recent decades. Any effort aimed at addressing a singular climate threat should widen its scope and acknowledge that those conditions are likely not isolated. They may be caused or exacerbated by other events and their fallout may present unexpected challenges. If we're going to address these ecological threats, we're going to have to treat them as a system — otherwise we're going to play whack-a-mole with these threats until the entire system collapses.

More like this
The Brood X cicadas are showing up on weather reports now
By AJ Dellinger
Jeff Bezos is going to space, which is the most divorced guy thing imaginable
By AJ Dellinger
Greta Thunberg calls out G7 leaders for their frivolous and wasteful meeting on climate change
By AJ Dellinger
Stay up to date