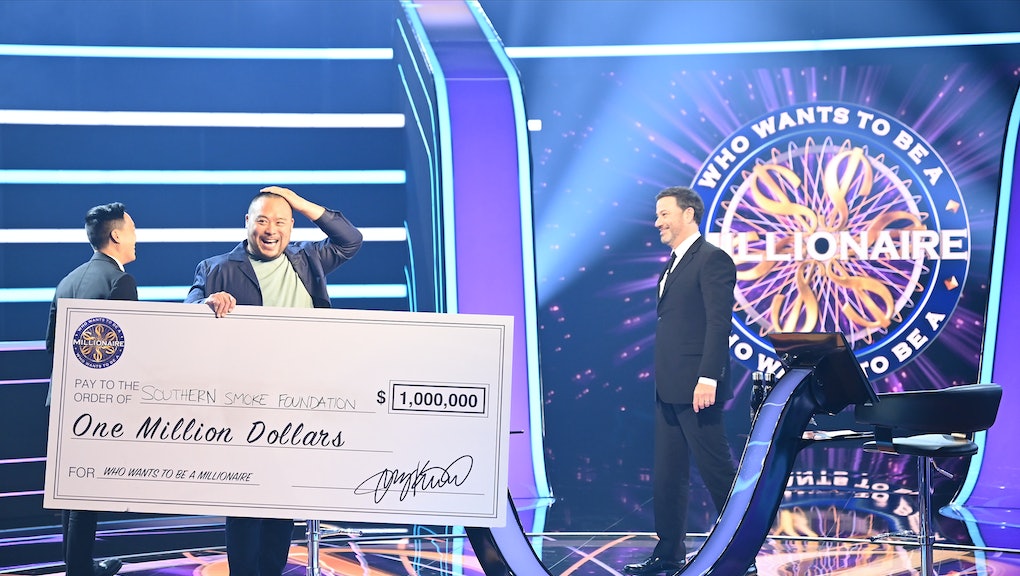 On Sunday night, celebrity chef David Chang made Who Wants to Be a Millionaire? history, taking home the big million-dollar prize. He was the first celebrity in the show’s 21-year run to do so, finishing what Norm MacDonald came so close to pulling off in 2000. In fact, he was the first celebrity to even attempt the final question without walking away with $500,000. He donated all of his winnings to the Houston-based Southern Smoke Foundation, a crisis relief organization for workers in the service industry.

Chang entered the final question with a lifeline intact, his phone-a-friend. He didn’t have much of a clue about the million-dollar question, which asked who was the first president to have electricity in the White House, so he dialed up friend and ESPN anchor Mina Kimes. With just a few seconds left, she said “I think it’s probably [Benjamin] Harrison.”

After Kimmel briefed Chang on the stakes — a $468,000 swing if he gets the question wrong and goes home with $32,000 — he stuck with Kimes’ guess and went ahead with the right answer. “I’m a gambling man, and shame on me if this is wrong, but I’m doing this, because having a million dollars in this moment is a game changer for many, many families,” Chang said.

The trivia series has taken on numerous forms in its two-decade run on primetime and syndication. The current Kimmel-hosted iteration, following its celebrity-only revival earlier this year, is a hybrid format of famous guests and frontline workers contending for $1 million. Chang is now one of 13 contestants to answer the final question correctly, and the first to win the million in over a decade.

In an after-show interview, Chang told Kimmel about why he chose Southern Smoke, during a time when the restaurant industry is hurting far and wide:

“I wanted to raise some awareness for the restaurant industry," he said. "Southern Smoke wasn't able to do their annual charity drive because of COVID...I was over the moon that we could do that, because it's been a ridiculously tough year.”

A few months ago, I complained about the onslaught of celebrity game shows, and how they provide just a fraction of the urgency when regular people appear as contestants. It's hard to back away from that take altogether, but Chang presented the best possible outcome for a celebrity game show: someone who was willing to chance it all for maximum impact.

More like this
In 'Roadrunner,' Anthony Bourdain shows us the beauty of the mundane
By John Saward
Phoebe Bridgers and John Mulaney announced tour dates and the internet imploded
By Chloe Stillwell
Britney Spears is one step closer to escaping her father's control
By Kara Weisenstein
Stay up to date