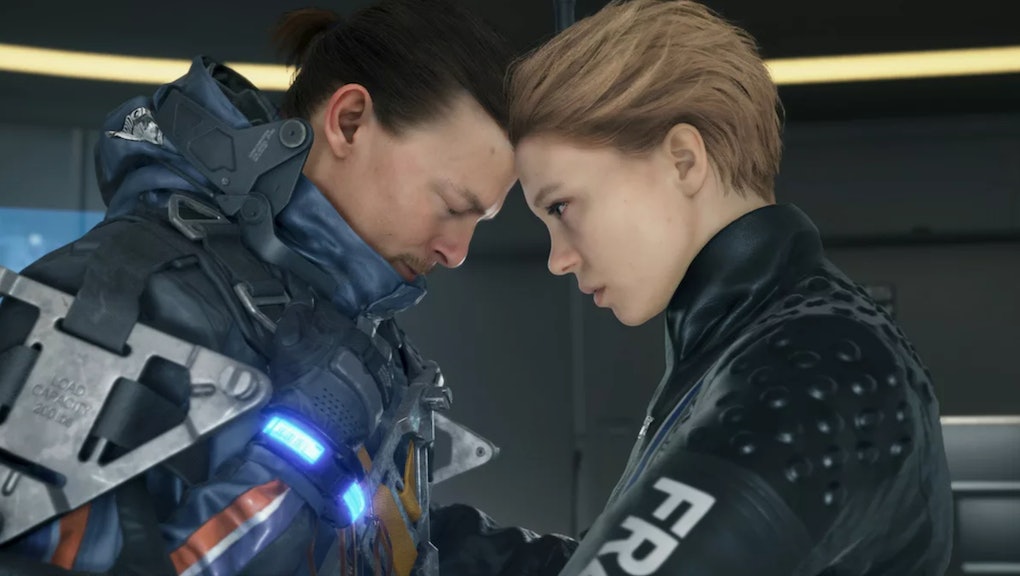 The creator of the iconic stealth action video game series Metal Gear Solid is finally back with a new look at Death Stranding, his trippiest work so far. Hideo Kojima's first official video game release following his 2015 departure from Konami has been something of a mystery for gamers ever since it was first revealed at E3 2016. Now, 'Death Stranding's release date has finally been slated for November 2019, with a deluge of additional details revealed in a new trailer and PlayStation Blog post.

Death Stranding is a massive undertaking for Kojima, and it's quite possibly one of the biggest games the PlayStation 4 still has in its arsenal for the year. It features a celeb-studded cast with personalities like The Walking Dead's Norman Reedus, Mads Mikkelsen, Nicolas Winding Refn, Troy Baker, Lea Seydoux, Guillermo del Toro, and Lindsay Wagner. It's got the star power, the big shot developer, and a massive studio behind it, but until now it's seemed too obtuse and nebulous to really look forward to.

Luckily, over time, we've seen a bit more of the mystery come together, piece by piece. And the latest trailer offered information about some of the game's supernatural enemies, which are apparently known as "BTs." They're appear to be akin to some very strange smoke monsters that attack seemingly at random, only forecasted by grimy handprints that you'll learn to avoid.

The new footage also showed off some of the first true gameplay fans have had a chance to see from the game, as most of the previous clips have focused solely on pre-rendered scenes and cinematic video. Reedus's character Sam Porter Bridges is seen running around and hiding in tall grass, squaring off against enemies in yellow biohazard suits, and doing his best to avoid the "Timefall," or a bizarre type of rain that can age anything it touches. Creepy stuff.

In an Official PlayStation Blog post, Kojima himself provided some commentary on the upcoming game, though his thoughts on the game may very well raise more questions than answers.

"People have created 'Walls' and become accustomed to living in isolation," he wrote. “Death Stranding is a completely new type of action game, where the goal of the player is to reconnect isolated cities and a fragmented society. It is created so that all elements, including the story and gameplay, are bound together by the theme of the 'Strand' or connection."

Kojima explained that character Sam will make an attempt to "bridge the divides in society," which will in turn create "Strands" with other players around the globe, potentially hinting at some sort of multiplayer mode in-game that will involve other players in some sort of persistent universe.

"Through your experience playing the game, I hope you’ll come to understand the true importance of forging connections with others," he said.

Unfortunately, the trailer itself was still bereft of some of the important plot details fans have been asking for over the years, though we do now know more about the game at its core: Reedus's character Sam does reinforce the idea that America needs to be "rebuilt" somehow, and what look like bizarre artificial uteruses containing "Bridge Babies" that can be seen in the trailer are an important part of fighting off the "B.T." creatures.

Death Stranding is finally projected to debut on PlayStation 4 on November 8, with several different editions for fans. The Standard Edition, Special Edition, Digital Deluxe Edition, and Collector's Edition will all be up for grabs, each with varying types of loot that comes with the game.

The Standard Edition is $59.99, and will include a voucher to download a special "Chibi Ludens" PlayStation Network Avatar, as well as a Death Stranding PS4 Dynamic Theme. All pre-orders will include gold versions of items in-game, including Gold "Sam" Sunglasses, a Gold Hat, a Gold Speed Skeleton, which increases Sam's movement, and a Gold Armor Plate, which increases protection against damage for Sam.

The Special Edition, which is $69.99, includes a collectible Steelbook case as well as all of the same incentives from the Standard Edition, as well as a digital soundtrack. Those who opt for the Digital Deluxe Edition, $79.99, will get all previous digital pre-order incentives without the physical disc to go along with it, as well as additional PlayStation Network avatar items.

Finally, the most impressive version of all is the Collector's Edition, which will retail for $199.99. It comes with all of the rewards for the previous tiers of the game, but also a life-sized "BB Pod," which is essentially a baby in a jar like the ones seen in the trailer, a BRIDGES Cargo Case to hold all your goodies, and a Ludens keychain, which represents Hideo Kojima's Kojima Productions mascot.

Death Stranding is finally coming, and it's going to be a doozy. Better plan your days off for this November, Kojima fans.