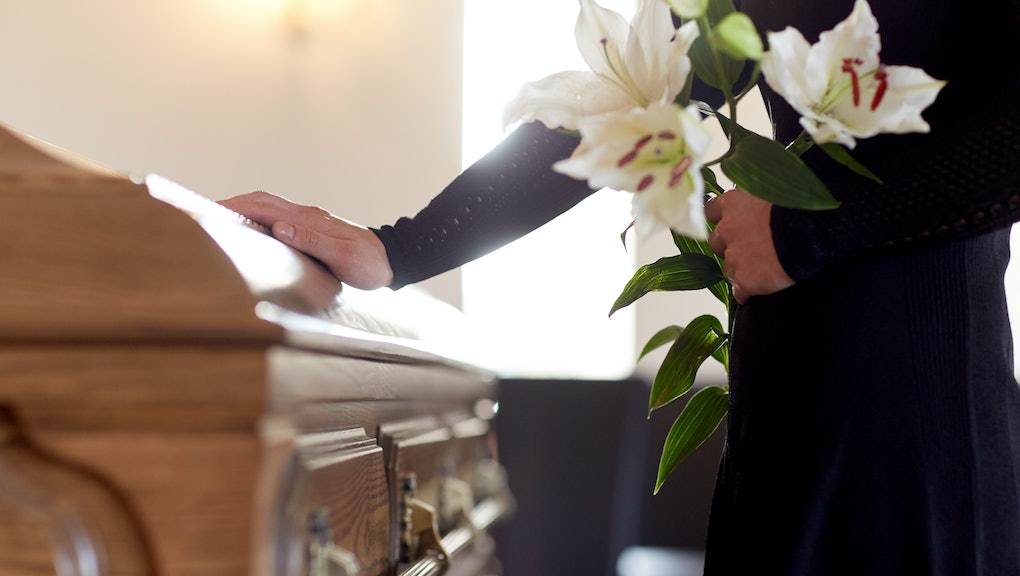 Deathbed photography could be a much needed grief ritual

Editor's Note: The image of the deceased in the below article might be sensitive to some individuals.

When my grandmother died, my mom asked me to take a picture of her in her casket with my phone. I felt kind of embarrassed, but I did it. Afterwards, I asked her why. "We don't have many pictures of her dressed up, baby," my mom said. It was true. My family is country; nice clothes are reserved for weddings and funerals. Now, I always feel soothed when I look at the picture. My relationship with my grandma — who patiently taught me to bake biscuits and snap green beans in her hot kitchen — continues, and this photo feels like proof. More folks are becoming familiar with the practice of deathbed photography because it has leaked into social media and some find it unsettling.

People have been taking pictures of their dead loved ones for almost as long as photography itself and I don’t think it’s weird at all. I talked to experts about the psychology behind deathbed photos and the myth that grief means “getting over” death.

“Although a person dies, our relationship with them does not,” Mark D. Rego, a Connecticut-based psychiatrist and associate professor of Psychiatry at Yale University School of Medicine, tells Mic. “The sentiments of ‘put it behind you’ are rarely helpful advice. They don’t reflect the reality of the powerful ways in which we are connected to one another.”

Rego’s words hit home for me emotionally, and they also feel like common sense. When my grandmother died, she didn’t stop being a presence in my life. She just stopped being present in her body. My grandma leans over my shoulder every time I bake biscuits. She is in my hands as I knead the dough. I remember her every time I get the sandy texture just right. Even my satisfied nod is similar to hers.

Our relationship feels very much alive and having photos feels like a natural extension of that relationship. My experience may not be the norm, but it’s not abnormal, either. It’s a matter of culture. “Death is different for different people depending on the nature of their connection, the age at the loss, and their culture,” says Rego. “In some cultures, the act of taking pictures and reflecting on them forms an important ritual of mourning and remembrance,” says Thomas Lindquist, a Pittsburgh-based psychologist and professor at Chatham University.

Death photos, then, are far from being some backwoods death fetish. They indicate a comfort with the natural cycle of life that includes death that most of the Western world is lacking.

“An important part grief work involves engagement in a process of remembering the person and relationship that has been lost,” Lindquist says. “A healthy grief process typically results in a person being able to successfully shift their worldview around the loss and incorporate new ways of relating to their loved one now that they are gone. It is likely that it felt soothing to view your pictures because it provided a touch point for your grief process as you remembered your grandmother and adjusted to the change in the nature of your relationship to her,” he tells me.

Yes. The picture I took gave me a way to both remember my grandmother’s life and also recognize and acknowledge its end. No one looks “alive” in post-mortem photos. They ask you to confront what seem like the conflicting realities of grief: The person was real and now they are not, still the relationship continues in a new way as remembrance.

“Different cultures treat death very differently,” Rego says. Even though I am American, I have never felt like that word describes the world my family lives in. My family is from rural West Virginia. Appalachia has its own rich history and traditions that are unfamiliar to (or misunderstood by) most of America. Appalachian ways are not the American norm, but they are not, anthropologically speaking, backwards. “Cultures like the one your family comes from are comfortable. They take pictures and even touch the deceased. This in fact has been the normal way people have interacted with the dead for most of time,” Rego explains.

Death photos, then, are far from being some backwoods death fetish. They indicate a comfort with the natural cycle of life that includes death that most of the Western world is lacking. “In the modern west death is treated like something to be afraid of and even disgusted by,” Rego says. Taking photos is a way of engaging with death, both as an idea and as a physical reality for someone beloved, that can help us emotionally process that reality.

“Our cultural response to death and loss often just scratches the surface when compared to other cultures and historic traditions,” Lindquist tells me. “The act of taking pictures not only allows for a deeper engagement and processing of the loss, but also provides a much needed expansion to the mainstream norms around funerals in the U.S.”

Death photos, then, are far from being some backwoods death fetish.

That may all sound gentile in the privacy of our own funeral parlours. But what about when deathbed photos end up on social media? Doesn’t that belittle the grandiosity of death? I don’t think so. In some New Orleans cultures, the bodies of the deceased are posed at their own funerals doing things that they loved. Some people find this kind of memorial extreme, but for those who practice it, it is a way of honoring the life of a person who has passed and a chance for those who loved them to see them in action one last time. This feels natural to me, like a ritual that allows folks to process the reality of death instead of simply burying it untouched.

“Our culture suffers from a lack of ritual,” says Linquist. Those rituals help us connect to each other and the larger experience of being human. And we document all the rest of our human rituals on social media, from breakfast to marriage. Why shouldn’t death become one of our most Instagrammable moments? “Incorporating more acceptable rituals, like deathbed photography, could expand on the opportunity for healthy grief work,” Lindquist says. “ That would be a positive step towards connecting with our human nature and deep desire and need for ritual.”

More like this
I chased my J&J vaccine with a shot of Pfizer. Here's why
By Tracey Anne Duncan
Will full FDA approval convince the vaccine hesitant?
By Melissa Pandika
Tinder for anti-vaxxers is my actual nightmare
By Melissa Pandika
Stay up to date