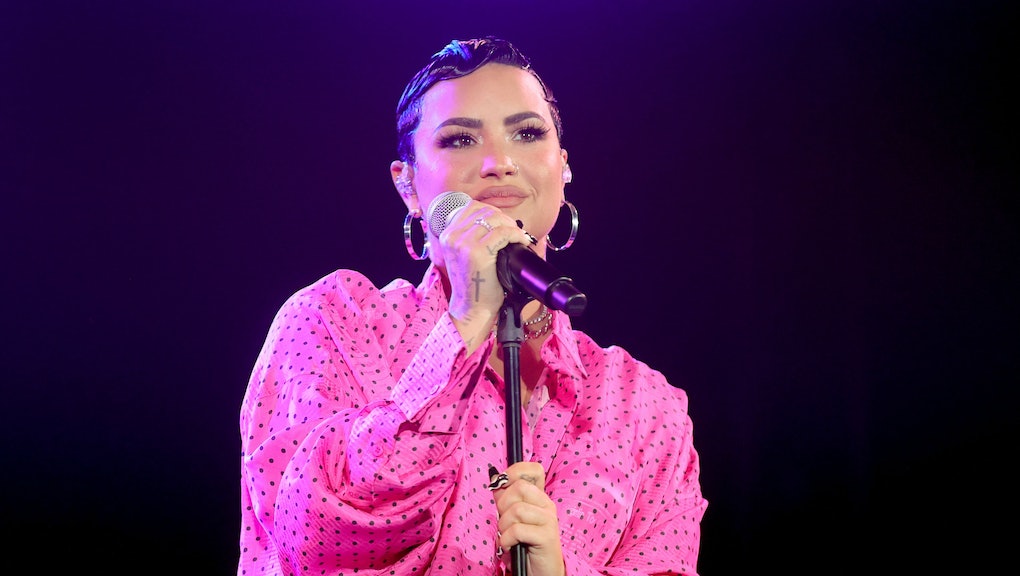 It's been inspiring to witness Demi Lovato accept themself. The pop star first confronted their shame surrounding addiction with a searingly honest four-part documentary detailing their overdose, recovery and sobriety journey. That growth was coupled with other revelations. In late March, Lovato told Joe Rogan, "I'm so fluid now," and said, "I’m part of the alphabet mafia and proud." Now, with the release of their own new podcast, 4D With Demi, the pop star has elaborated on their gender identity and come out as nonbinary.

"Over the past year and a half I've been doing some healing and self-reflective work," Lovato told listeners during the first episode of 4D. "And through this work, I've had the revelation that I identify as nonbinary. With that said, I'll be officially changing my pronouns to they/them."

They emphasized that coming out is a process and asked for compassion: "I'm still learning and coming into myself, and I don't claim to be an expert or a spokesperson. Sharing this with you now opens another level of vulnerability for me," the singer said. Lovato noted it "would mean the world" for people to use their preferred pronouns but figures mistakes will happen. "I will also be accepting if people slip and say her/she, because I know that being in my position, it's going to take a while for people to get used to."

A number of stars have disclosed they're nonbinary in recent years, like Amandla Stenberg, Asia Kate Dillon, Indya Moore, Sam Smith, Jonathan Van Ness and Lachlan Watson, to name a few. According to a 2020 Trevor Project study of more than 40,000 LGBTQ+ youth, one in four identify as nonbinary. According to Them, another study found that half of Gen Z thinks traditional gender roles are outdated.

Lovato talked through identifying as nonbinary and adopting they/them pronouns with gender non-conforming author, performer and speaker Alok Vaid-Menon, who encouraged the singer to celebrate themself: "We are people who have existed for thousands of years who actually experience ourselves outside of the idea of man or woman," Vaid-Menon told Lovato. "But what I want you to understand is that it comes from a place of deep joy and healing, not from a place of doubt."

Vaid-Menon also pointed out that shifting the way everyone thinks about gender takes patience — even for oneself. "It’s not as if trans and nonbinary people are born with gender literacy. It’s something that we develop in order to be better for each other," they said. "So, if we could do it, you could do it, too. It just takes practice and commitment."

More like this
Billie Eilish doesn't have to answer to us about who she loves
By Kara Weisenstein
Harry Styles, king of gender neutral style, is working on a line of cosmetics
By Kara Weisenstein
"We Keep Us Safe:" AAPI people are taking their safety in their own hands
By Sarah Wang
Stay up to date