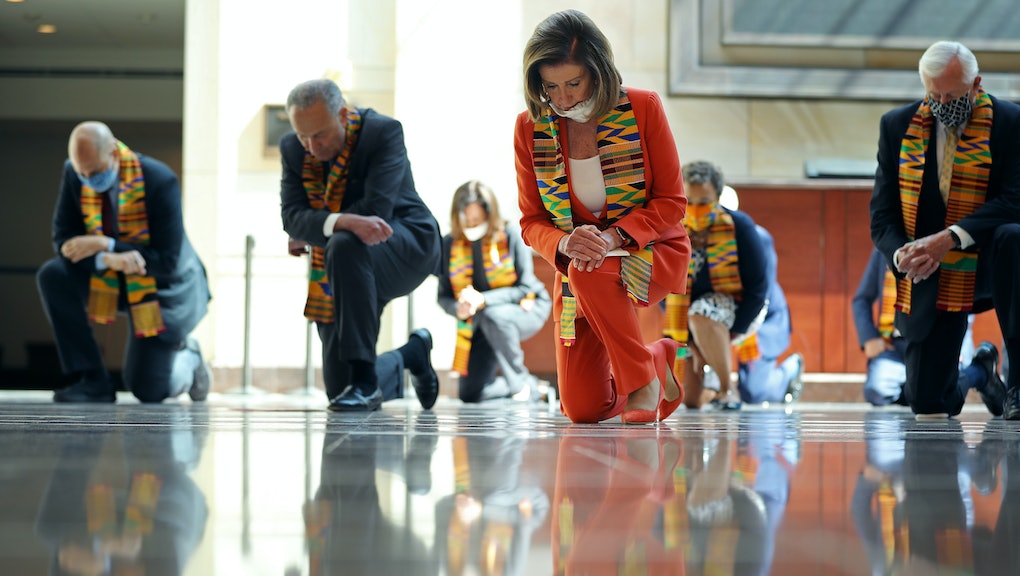 Nationwide protests do not show signs of stopping following the Minneapolis police killing of George Floyd. While President Trump is more focused on threatening protesters or calling them terrorists, Democratic leadership has tried to respond, and legislatures unveiled a bill of police reforms Monday. But some are criticizing Democrats' proposal for falling short and ignoring the demands of organizers on the ground. Also, who told them to wear kente cloth?

On Monday, House Speaker Nancy Pelosi, Senate Minority Leader Chuck Schumer, and about two dozen other Democratic lawmakers announced their new police reform package. The reforms would make it easier to prosecute police for misconduct, ban chokeholds, require body cams, and more. In addition, the bill would end "no-knock" warrants, which led to the death of Breonna Taylor in March.

While these reforms seem great, there are glaring issues. First, banning chokeholds doesn't mean police won't use them. In 1993, the New York City Police Department banned chokeholds. That didn't prevent Eric Garner from being killed on the sidewalk in 2014 by a police officer who used one. With its recent passing of the Eric Garner Anti-Chokehold Act, New York City has now twice banned chokeholds without addressing the root issue: the police officers who use them.

But activists on the ground are calling for police to be defunded, with some seeing it as a path to total abolition. Reforms like requiring body and dashboard cameras would require putting more money into police, and they haven't been consistently effective. In many cases, officers simply decline to turn on their body cameras, and similar to banning chokeholds, putting cameras on police doesn't stop them from killing people even when the cameras are running. And with the potential for facial recognition to be embedded within these technologies, giving police more cameras could actually end up heightening surveillance for communities of color.

But it isn't just the content of the bill that's facing backlash. Before presenting the reforms, Democrats knelt for eight minutes and 46 seconds as a tribute to Floyd, with kente cloths around their necks. The move was swiftly rebuked by Black people online.

This isn't the first time kente cloth has shown up in Congress. Vanity Fair reported that the Congressional Black Caucus wore kente cloth provided by designer Titi Wreh, a Liberian immigrant, at Trump's 2018 State of the Union Address. They did so in response to Trump's "shithole countries" comments.

But seeing mostly white politicians kneel on the ground with kente cloth is shallow for many. Kneeling in protest doesn't mean much if you're in the position to make real systematic change. Plus, Floyd died because of a knee on his neck. In this instance, kneeling becomes less a show of solidarity and more of a replication of his killing.

In Minneapolis, protesters are trying to ensure that the city council follows through with its promise to disband the city's police. The potential that police could simply be replaced with a similar — and equally deadly — structure looms in light of cities like Camden, New Jersey. In 2014, the city disbanded its police department but simply made a consolidated regional police force instead.

Still, many top Democrats are doubling down on their reform policies. Andrew Bates, a spokesman for presumptive Democratic presidential nominee Joe Biden, told Vice that Biden "does not believe that police should be defunded. He hears and shares the deep grief and frustration of those calling out for change, and is driven to ensure that justice is done and that we put a stop to this terrible pain."

Bates added: “Biden supports the urgent need for reform — including funding for public schools, summer programs, and mental health and substance abuse treatment separate from funding for policing — so that officers can focus on the job of policing.”

With abolition now in mainstream conversation and projects like 8 To Abolition helping to educate the greater public, Democrats are not going to be able to use stunts to avoid this conversation. If anything, their reform bill and use of kente cloths reveals how disconnected establishment politicians are from protesters on the streets.

More like this
All 4 officers involved in George Floyd's death will face federal charges
By AJ Dellinger
In his first address to Congress, Biden took on the country's vices: guns and police brutality
By Rafi Schwartz
Title IX will once again protect against gender identity discrimination
By Rafi Schwartz
Stay up to date