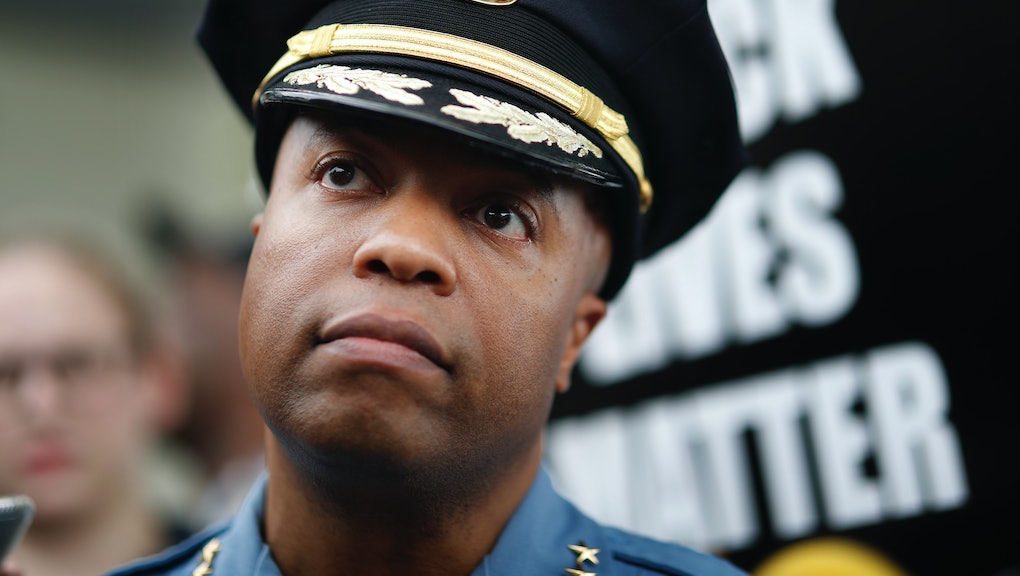 In one of the most anticipated moments of an already emotionally fraught trial, Minneapolis Police Chief Medaria Arradondo took the stand on Monday to testify against former officer Derek Chauvin. It's a pivotal moment in the murder case against Chauvin, not only for the significance of a sitting police chief testifying against a former officer of his department, but also for who Arradondo is, and his history with the Minneapolis police.

Walking jurors through his extensive career with the Minneapolis Police Department — starting as a patrol officer in the late '80s — Arradondo stressed the mission of the MPD, explaining that its slogan "to serve with compassion":

means to me to understand and authentically accept that we see our neighbors as ourselves, we value one another, we see our community as necessary for our existence.

In part, Arradondo's presence is in keeping with the prosecution's broader attempt to portray Chauvin and his actions before, during, and after the death of George Floyd, as aberrations from the broader, ostensibly noble work of the Minneapolis Police Department. As a multigenerational Minneapolitan with decades of experience at multiple levels of policing, Arradondo is something of an ideal example of how community policing is supposed to work. And throughout his career, Arradondo has been surprisingly willing to publicly criticize the department and its leaders, including having taken part in a lawsuit against the department over its treatment of Black employees in 2007.

Notably, Arradondo was named chief of police following his predecessor's resignation in the wake of the 2017 death of Justine Diamond, an unarmed civilian, at the hands of MPD officer Mohammed Noor.

But Arradondo, who had previously called Floyd's death a "murder," was not simply called to the stand as a not-so-subtle attempt to differentiate Chauvin from the rest of the "good" police who work for the department. He also offered concrete testimony about the Minneapolis Police Department's extensive de-escalation training, calling it "absolutely, vitally essential" to the department's work.

Key to Arradondo's testimony was his description the MPD's use of force policies. "The goal," Arradondo explained at one point, "is to resolve the situation as safely as possible." Asked whether de-escalation training was considered part of the broader rules for use of force, or something altogether opposite, Arradondo answered that "we teach it is as both."

Arradondo was the second witness for the prosecution Monday, following Bradford Langenfeld, the Minneapolis emergency room doctor who pronounced Floyd dead due to his lack of a heartbeat "sufficient to sustain life," the result of what Langenfeld said was insufficient oxygen. Crucially, Langenfeld testified in seeming opposition to Chauvin's attorneys' defense — that Floyd's illicit drug use may have contributed to his death — noting that while the drugs in Floyd's system had been known to contribute to cardiac arrest, Floyd's condition didn't seem to be the result of a specific overdose.

"I didn't feel there was a specific toxin for which we could give a medication that would reverse his [cardiac] arrest," Langenfeld testified. Witness testimony in the trial will continue this week.