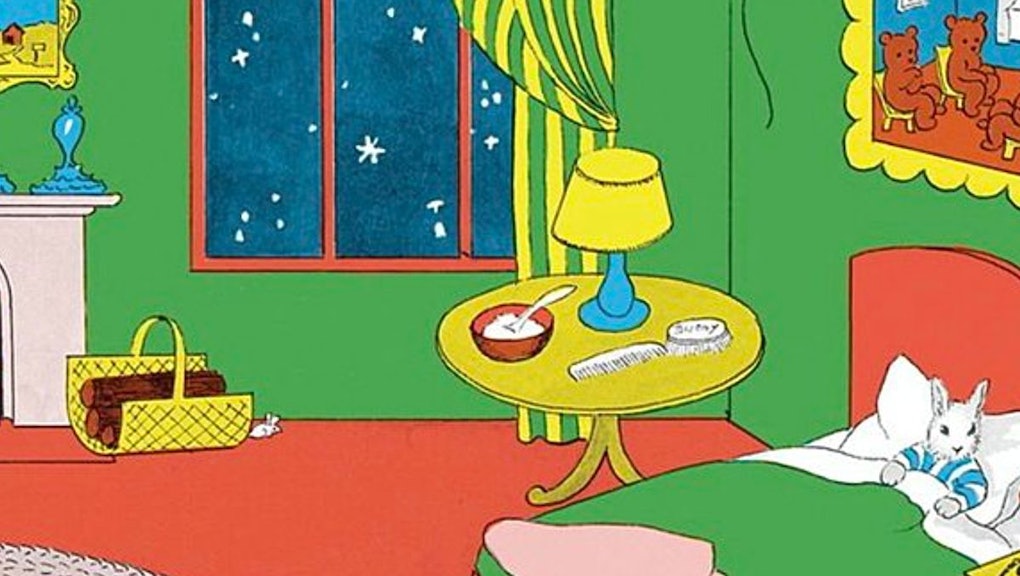 Written and illustrated more than 60 years ago, the children's book Goodnight Moon still hits. The aesthetically pleasing universe crafted by playwright Margaret Wise Brown and illustrator Clement Hurd is an enduring image of top tier comfort. In a time obsessed with nostalgia, it only makes sense that adults on the internet have found something to grasp on to in its pages.

The most iconic scene features a small rabbit in a bedroom awash in vibrant colors and patterns reminiscent of a Hockney painting. It has inspired both ire — a humor blog from 2015 lambasted the room — and longing, with tweets calling it "timeless, effortless."

Ted Vadakan, co-founder of the lifestyle brand Poketo, told Mic that the illustration feels like a contrast to the uncertainty that seems to pervade everything right now. "I think that this generation is focused more, not on having things, but rather seeking experiences and a comfort and meaning in life,” Vadakan said.

Alessandra Wood, the Vice President of Style at the online interior design company Modsy, told Mic that the company has done research into what people want in their homes, and in many ways, it aligns with the vibe of the Goodnight Moon image.

“I think we can identify that it's a little unsettling out there in the world the past few years,” says Wood. “I think, actually the design world is trending more towards this notion of staying in.”

“I feel like when you go home at night, it's like how we run to vacation,” New York-based interior designer Gail Davis told Mic. “Like you can't wait.”

Davis pointed out that the image from Goodnight Moon draws on a time period disconnected from technology. She says her clients have asked for similar unplugged-ness. No televisions in the bedroom, and she suggests having your charging station outside, too.

As for the exact elements in the illustration, all three design experts point to a few key qualities. A big space with a fireplace, warm colors, and blankets.

“It's funny, a lot of people really just want to go to sleep in peace and not have it disturbed,” Davis says.

Wood pointed out that the mixed and matched nightstands in the illustration speak to an eclectic timelessness. The type that makes the idiosyncrasies of a childhood room so comforting.

“I don't do a lot of matching with my furniture pieces,” Davis says. “I do pieces that complement each other. You don't want to feel like you walked into these big box stores where they sell you the sofa and the two chairs, and all the pieces are the same color.”

At the end of the day, it's about a room that shelters us from the outside world. A room where, left to our own devices, we'd want to stay in forever. The feeling of being young again.

“When you look at actually what's in the space, there's a nostalgia for a different time," Wood says. " When we had a different connection with our homes.”

More like this
Did Ta-Nehisi Coates troll Jordan Peterson in his 'Captain America' comic?
By Kara Weisenstein
The long-awaited 'Zola' movie looks so, so good
By Kara Weisenstein
Choose-your-own erotica books let you customize your horniness
By Tracey Anne Duncan
Stay up to date