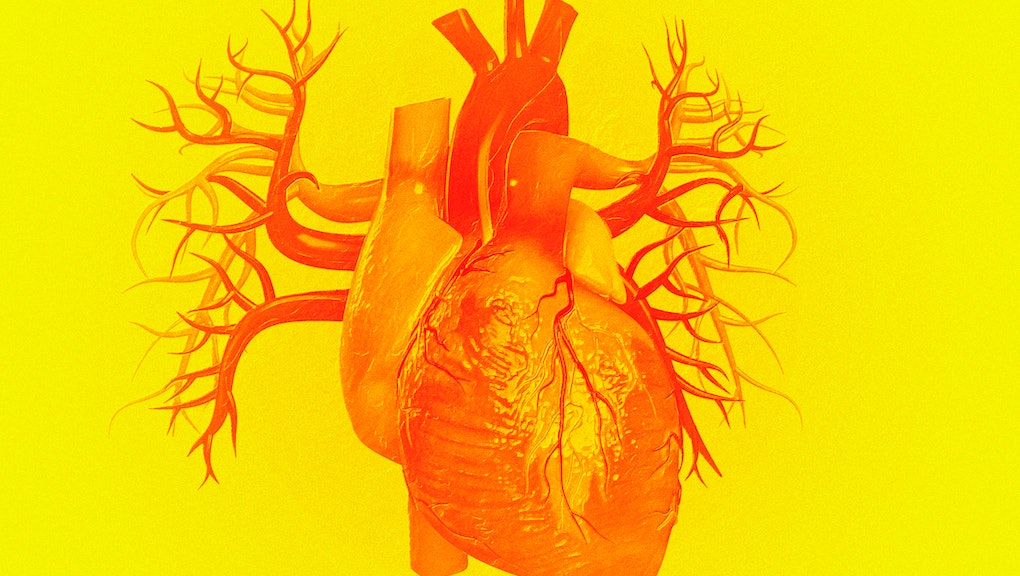 Even as we transition out of a political era that’s been particularly oppressive to LGBTQ Americans, trans and gender non-binary folx are still being discriminated against — sometimes, to the point of physical distress. And this oppression, of course, has long-term implications. The American Heart Association just dropped new findings that highlight heart health in particular, revealing that trans and gender diverse (TGD) Americans have disproportionately high rates of heart disease.

The data from this report, which was published in Circulation, the association's flagship journal, is staggering. One of the scarier takeaways is that trans men are twice as likely to have heart attacks than cis men and four times more likely than cis women. Because the these findings come from a body of research rather than a single study with a set of participants, the age range that heart disease might kick in is unclear — still, the results are a call for change.

Unsurprisingly, those health disparities exist largely because of social stigma, lack of access to healthcare, discrimination within the medical system, and policies that increasingly target trans and non-binary people. According to the report about the research in Eurekalert, poor heart health is “driven by psychosocial stressors across the lifespan at multiple levels.”

This combination of factors that fuel chronic stress can be explained by the minority stress theory, which health professionals formulated to explain how everyday prejudice affects queer people. For TGD people, one quotidian stressor is being misgendered or dead named by both strangers and people close to them. And there are several other less obvious ways in which transphobia negatively affects trans people’s health.

Chronic stress alone can heighten the likelihood of having a heart attack. The stress of structural violence can also lead to other self-harming behaviors, including substance abuse. TGD people are 24% more likely to report using tobacco and diet pills, all of which are detrimental to cardiovascular health, the report said.

And of course, we can’t talk about health disparities in gender minorities without talking about systemic healthcare discrimination. According to the data, “56% of LGBTQ adults and 70% of those who are transgender or gender non-conforming reported experiencing some form of discrimination from a health care professional.”

In New York, for example, Medicaid doesn’t cover gender reassignment surgery unless someone is given an official diagnosis of gender dysphoria — which is up to the discretion of a medical professional. Doctors and nurses who aren’t specifically trained to treat trans and gender non-conforming patients may ask intrusive questions, and this fear of discrimination discourages many from seeking healthcare altogether: A 2017 study found that nearly 23% of trans people simply don’t go to the doctor because of anxiety.

Unfortunately, the discrimination that’s putting TGD people at high risk appears to be getting worse. In 2021, a record number of anti-trans legislation has already been introduced across 33 states. Although the Biden administration overturned a Trump-era order that would have allowed healthcare professionals to deny care to trans patients, conservative-led states are committed to passing transphobic policies. Several have already banned trans athletes from competing in professional sports, and 20 have banned gender-affirming healthcare for minors.

Clearly, there’s a lot to address when it comes to the health disparities outlined in the report. “Heart health within the TGD community will require a multi-pronged approach that includes health care professionals, educators, researchers, and policymakers,” the review’s authors assert. Here's hoping that their concerning analysis of our current reality, as well as their call for change, is taken seriously.