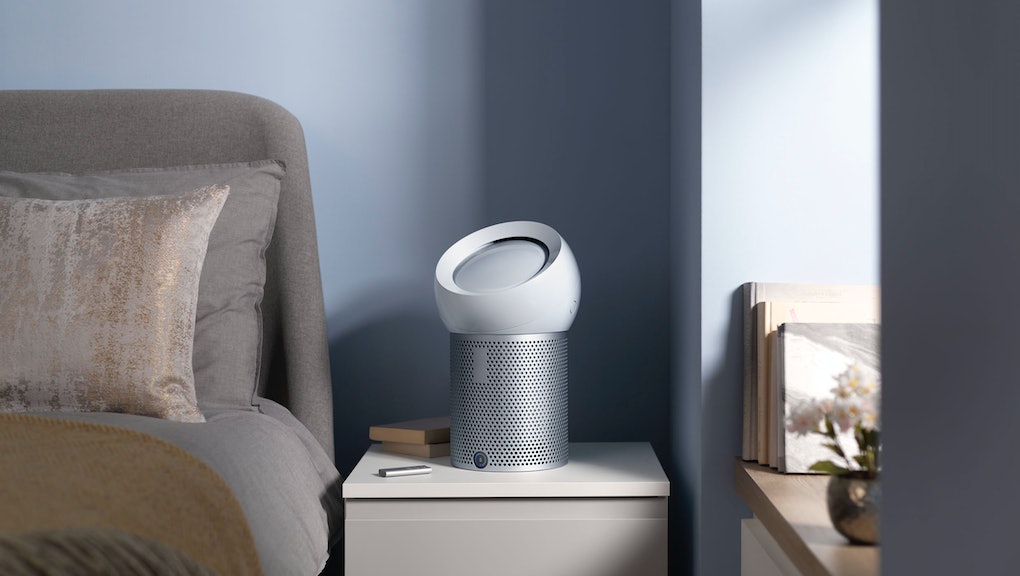 Do air purifiers help with allergies? Here's what happened when I tested one out

People who have air purifiers swear by them. My dad has three in his house and I have a friend who won't travel without hers. Manufacturers claim that they help relieve allergy symptoms, but my dad still gets sinus infections on the regs and my friend still has allergies and my own symptoms were only improved a bit. I've been dubious about what air purifiers do and whether people actually need them. So, out of a combination of curiosity and a desire for better air quality, I decided to try one.

When the folks at Dyson sent me the Pure Cool Me air purifier to check out (it's ordinarily $350, but you can likely find it for cheaper at retail stores off-season), I didn’t rush to open it. I was sure it would be unsightly and loud.

It’s not ugly at all. Actually, it’s kind of cute. It looks like a little white spacecraft sitting on a silver launchpad. And there was nothing complicated about setting it up. It just plugged in. I turned it on, waiting for the harsh, grinding machine noise. Nope. Even on its highest setting, it sounds like a white noise machine. My puppy barked at it for a minute, but otherwise there were no issues, so I went to bed.

I woke up in the middle of the night and the room was freezing. The best part of this thing so far, was that the air that came out was remarkably cooler than the temperature of my room. Y’all, I can’t tell you how major this is. New Orleans is a hot humid greenhouse of a city and jacking up your air conditioning jacks up your energy bill like crazy.

In the morning, I rushed to take my allergy meds. I haven’t done all the tests so don’t know what I’m actually allergic to, but I basically can’t function without Claritin. My eyes are perpetually itchy and my nose runs constantly. Only, after my first night with the mini-UFO, my eyes weren’t itchy and my nose wasn’t runny. What sorcery is this, I wondered? The thing seems to work.

But when I went into my kitchen to make coffee, my eyes and nose immediately started up again. The air purifier works, but only in the small space of my bedroom. I was kind of disappointed by this and asked the folks at Dyson to explain why the air purifier wasn’t making a difference in the rest of my home. “The Pure Cool Me is the ideal product for somewhere like the bedroom,” said Robyn Coutts, an engineer at Dyson. “It’s the smallest purifying fan that we make which makes it a bit more transportable between rooms if you didn’t want to buy a second machine.”

I asked Coutts to explain exactly what the machine does. It seemed like magic, but it turns out that it’s just hard science instead. “The machine draws in air through the base of the machine where it goes through a fully-sealed filter system. It is then propelled through the machine and projected out of the product as purified air. The filter is made of activated carbon and glass HEPA media,” Coutts told me. “The combination of these two things allows the purifier to capture gases and 99.97% of pollutants and allergens as small as 0.3 microns. For perspective, that’s about 300x narrower than a human hair.”

In layman’s terms, the machine sucks dirty air out of the room and swirls it really, really fast in a carbon and glass filter. The velocity aims to break up the pollutants that are in the air and they stick on to the filter. The air purifier then shoots the cleaner air back into the room.

OK, so that’s how it makes the dirty air clean, but how does it make the air cold? The cooling effect has a lot to do with the spaceship shape. "The air that has been purified by the filter is drawn up through the machine and is pushed out of two openings. The two high-velocity air jets travel over the convex surface of the dome and meet in the middle to create a high-pressure core,” Coutts explained. “The jets of air are forced to steer around the high-pressure core so they coalesce to project a focused stream of purified air.”

In other words, the air filter cools by shooting the now clean air across its curved surface in two streams that across from each other. The air cools as it moves across the curve of the dome and when the streams meet the air is pushed out into the room.

All this said, allergy specialists have mixed reviews about air purifiers in general. “Air purifiers are expensive,” Tania Elliott, a New York-based allergist told me. “Indoor air quality is important,” she went on, “but that can also be improved by keeping plants in the home.” Oh snap — consumer capitalism foiled by nature. “Indoor air quality can also be improved by making sure there is proper ventilation, upgrading your HVAC system, and opening windows for ventilation with clean outdoor air,” she added.

I asked Elliott if she thinks that air purifiers have any real benefits for people with allergies. “They’re best for individuals with pet allergies,” she said, “Pet allergens stay suspended in the air for months at a time, even if the pet is no longer in the home. Air purifiers that can capture fine particulate matter are your best bet. They can also be helpful for people with pollen allergy, as we inevitably track pollen into the home from our clothes, shoes, and hair.”

Basically, air purifiers can be super helpful to people who are allergic to solids rather than gases. Think pollen and pet dander rather than perfume and chemicals. But, Elliott told me, some air purifiers can help with chemical allergens as well. “Air filters won’t completely remove all of the pollution from indoor air,” she said, “If you want to remove gasses as well, choose a purifier with an activated carbon filter or another filter designed to remove gasses.” Luckily, my little Dyson spaceship has both, so I’m covered.

Maybe I didn’t need an air purifier and they may not work for everyone, but this little appliance has improved the quality of my life a solid 10%. I’m a convert. I still need allergy meds, but my symptoms are less intense and my room smells better and is definitely a lot cooler. I only wish I could afford one for every room.