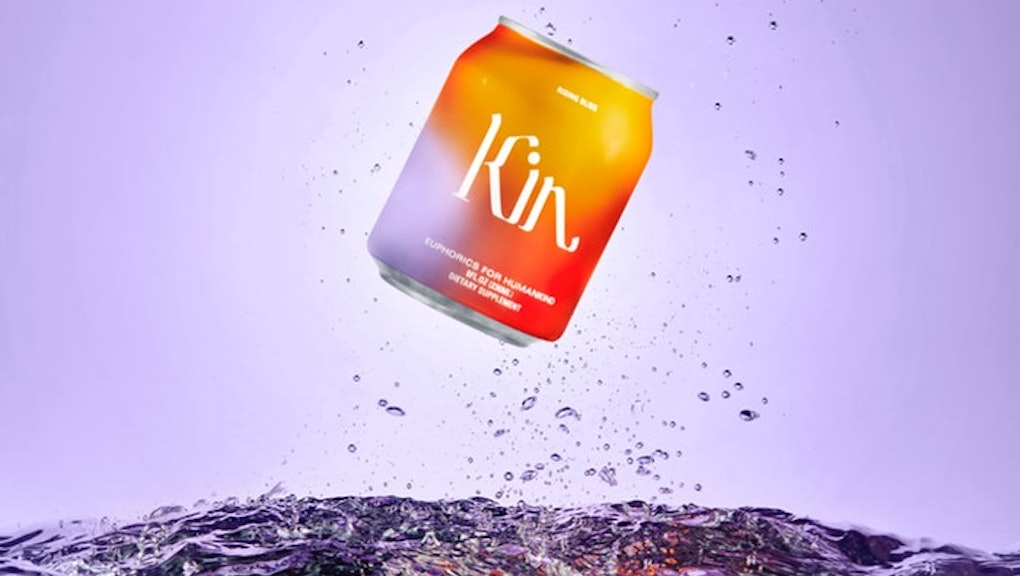 Do drinks with adaptogens in them actually give you a buzz?

New Orleans is famous for its drinking culture. But I’ve lived here long enough and had enough debilitating hangovers to have grown wary of alcohol and gotten seduced by the joys of sobriety. I often miss the rituals of drinking, though, and the sweet sweet buzz, so when Kin kindly offered to send me a sample of its canned mocktail — a drink that promises “euphoria” and a "blissful buzz without the booze”— I jumped on it.

The drink’s advertised buzz is based on its added adaptogens, nootropics, and botanicals such as Rhodiola and Hibiscus (all very Goop-y “ingredients” which I’ll break down in a minute). While the drink aims to chill you out and combat stress, I was mostly in it for the 50 mg hit (about a cup of coffee’s worth) of caffeine.

Kin’s packaging is its own kind of seduction. It’s a colorful, but muted, matte aluminum can that looks expensive. At $27 for a four-pack, it is kinda pricey, but it’s still cheaper than four drinks at most bars. Plus, at eight ounces, it’s small enough that I can low-key stow it in my fanny pack for excursions.

Before we even get into what’s in the drink, it’s worth noting that the beauty of the can, like any pretty product, might contribute to the buzz drinkers feel, said Scott Krakower, a psychiatrist at Zucker Hillside Hospital in Queens. “You could feel uplifted from the bottle and the way it looks,” he said. “It’s more enticing to drink something that seems fun.”

A friend and I cracked open the chilled cans and kicked back in my kitchen. The taste of Kin is lovely. It’s both earthy and citrusy and a little bitter, which I love. We caught up as the caffeine kicked in. “Do you feel anything?” I asked. It was a moot question, since we obviously wouldn’t be hit by herbs the same way as one might by something hard. “Um, I’m not sure,” she said, “I feel better, but it’s cool to hang out and caffeine always works on me.”

My experience was similar. I felt good, but euphoric would be an exaggeration. Perhaps it needed to become a part of my regimen for a week, though, to fairly gauge its effects. My friend enjoyed it as a mocktail though — the bubbles reminded her of prosecco.

On to the mystery ingredients: When I read the full list of ingredients to Krakower, he said, “Oh shit! There’s a lot of crazy stuff in there.” Adaptogens, like reishi mushroom, ginseng, and holy basil, are plant-based medicines that Ayurveda and Chinese medicine have been using for centuries. There is some contemporary scientific research to back up claims that they can help reduce stress and boost the immune system, but just like other medicines, they take differing amounts of time to produce effects in the human body, and the jury is still out on whether some of them give immediate benefit. So while adaptogenics might work, they may not give you the “rise into the night” that Kin promises.

I asked Krakower if “adaptogens” is a scientific term. “No,” he said, “it’s more like marketing terminology. The original theory that an adaptogenic will help you boost your own immunity came out of the alternative medicine field.”

I asked him if it was OK to drink them. “It’s hard to say if it’s unhealthy,” he said. “There’s always a potential risk when you’re ingesting canned products, even if they’re something like soda. It may contain things that we don’t want. But like all beverages you’re going to have fillers. I guess this way they’re infusing vitamins.”

I was a little more familiar with the concept of nootropics since I’d written about trying them in capsule form before. They’re chemicals that are supposed to enhance your mental performance and the doc I spoke to about them recommended consulting a physical if you’re going to dabble in anything more than a dad (this drink has a very small dose in it).

Still, “if it comes down to between drinking this and drinking alcohol this is the healthier choice,” Krakower tells me. He suggested that drinks like Kin are part of a wellness trend he sees, of our culture is moving more towards a healthier alternative lifestyle. “Alcohol is on the decline and weed is up. People don’t necessarily want to drink alcohol as much anymore. And even if they do want to drink, they could use something like this in between cocktails to balance out the effects of drinking.”

I asked Krakower whether adaptogenic drinks like Kin might give some people a hangover. “No,” he said, “ don’t think so, probably not unless they’re loaded with Ashwaganda [an adaptogenic commonly found in Ayurvedic medicines]. Most of these drinks are in such small amounts that it’s gonna be hard to load anything into them.” At the end of the day, we found Kin delicious. We also enjoyed not having eye splitting headaches and post-party depression from drinking.