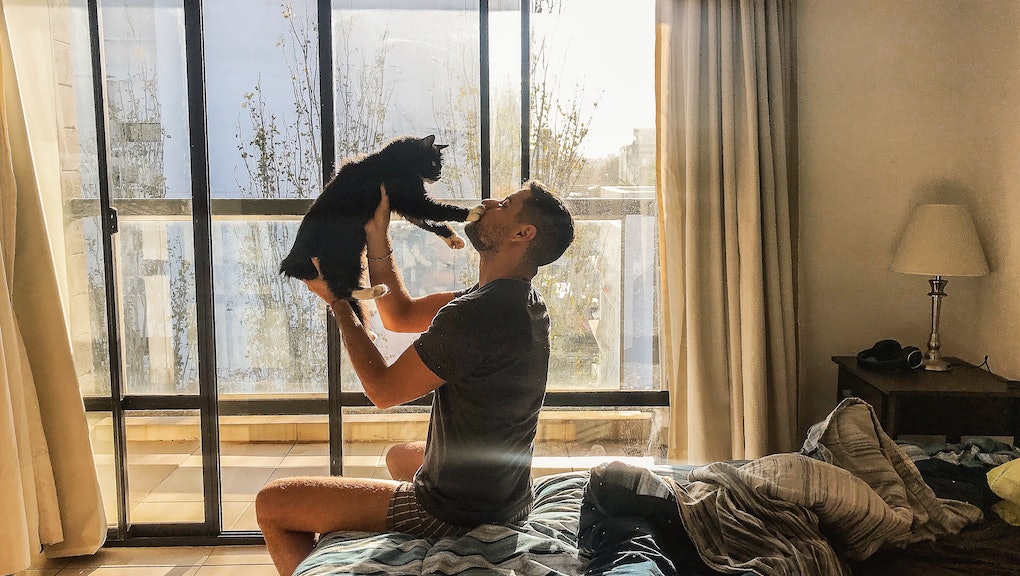 Dating on apps is like playing a psychosexual card game with very strict personalized rules. I have been known to swipe left on a person for such minor infractions as a visible corporate logo. Call me an anarchist, but imperialist coffee franchise merch is just not sexy to me. And while posing with any kind of carcass is a pretty clear cut red flag, a living and lovingly cared for kitten will definitely tip the scales towards the right. I am, apparently, in the minority. A new study suggests that women find men with cats in their profiles undateable.

A small but revealing study released at the beginning of June in the journal Animals suggests that the presence of a cat in a man’s dating profile makes them seem less dateable to women, CNN reported. Researchers showed 708 women a picture of a man and asked them to rate his potential dateability from hook up to LTR. Then they showed the women a picture of the same man with a cat and asked them to reappraise. Once a woman saw a picture of the man with a cat, his chances of getting a right swipe went down by about 5%.

Not only did a man with a cat’s chances of getting a date go down, the chances of a woman saying that she would never get involved with him went up from 9% to 14%. And men with cats also seemed to have less relationship potential, CNN reported. Women gave one of the men similarly positive ratings whether or not he was pictured with a cat, but those women also said they wouldn’t consider him potential relationship material.

The scientists who conducted the study think it has more to do with the way the women see the men than with the women themselves.

What is going on here, exactly? Do women hate cats? Not exactly, although the majority of women did identify as “dog people.” The female participants, who were aged 18-24, were mostly white and had already graduated from college. Okay, then, do educated white Gen Z women hate cats? That seems inconsistent with everything I’ve seen on the internet in the past decade.

The scientists who conducted the study think it has more to do with the way the women see the men than with the women themselves. "Women prefer men with 'good genes,' often defined as more masculine traits," Lori Kogan and Shelly Volsche, the study co-authors, said in their findings. "Clearly, the presence of a cat diminishes that perception." In other words, men with cats aren’t manly and women want manly men to be their boos.

I don’t even know where to start picking apart this heteropatriarchal ball of yarn. It doesn’t seem particularly surprising to me that white cis-het women who, presumably, went straight to college from high school and buy into the gender binary despite the fact that their generation has cooly rejected it also make some problematic assumptions about men with cats. It seems to me that the women queried in this study are a small homogenous subculture who are actually outliers in their own cultural context.

Also, not for nothing, the men in these cat pics look a little creepy. It’s not like there’s just a cat hanging around looking standoffish, as cats are wont to do. These are men posing with cats in obviously staged and bizarrely unironic glamour shots. Perhaps a valid conclusion to draw from this study is that people who were taught to conform to throwback cultural notions are also creeped out by the idea of dating cis-men who appear to be cat fancying serial killers? Pending peer review, of course.

This article was originally published on June 22, 2020

More like this
A blood test could reveal which type of exercise is most effective for you
By Joseph Lamour
This anti-vaxx doctor is seriously telling lawmakers vaccinated people are "magnetized"
By Tracey Anne Duncan
Can CBN help you sleep? The science behind the trendy weed compound
By Melissa Pandika
Stay up to date