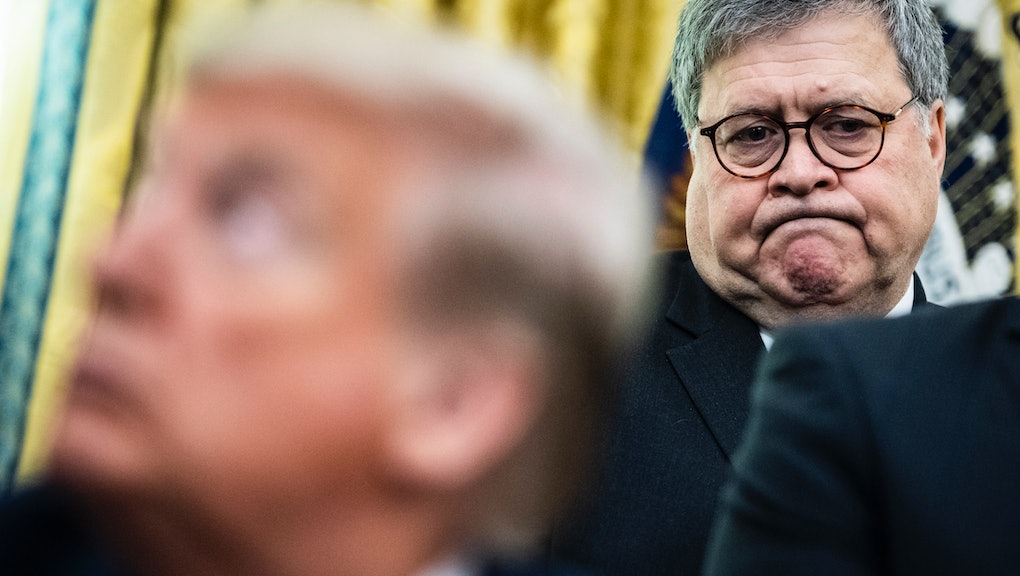 Does anyone believe Attorney General Bill Barr would quit over Trump's tweets?

When William Barr assumed control over the Trump administration's Department of Justice from then-acting attorney general and "masculine" toilet salesman Matthew Whitaker, he assured Congress that he would "truly be independent" as the nation's top law enforcement official. Sadly, if predictably, that has extremely not been the case.

Still, it seems as if Barr would like the public to believe that he does in fact have something resembling a vestigial spine, according to a number of sources who spoke with the Associated Press, claiming that Barr has threatened to retire from the Justice Department if the president doesn't stop tweeting mean things about him and his work. Per one of the AP's sources, Barr has not only been discussing the option with his own confidants, but has brought it up with the Trump himself. Mic reached out to the Justice Department for comment on the AP's report and did not receive an immediate response.

Meanwhile, for anyone who's been paying attention, Barr's tenure as attorney general has been clearly punctuated by any number of transparently obsequious efforts to appease President Trump's most lawless whims; from kneecapping the rollout of Special Counsel Robert Mueller's report on Russian interference in the 2016 election, to interfering in the prosecution of longtime Trump crony Roger Stone, Barr has essentially defined himself as the president's de facto legal bodyguard, raising the public ire of more than a thousand former DOJ officials as a result. (Justice Department officials claimed the re-evaluating of Stone's sentence was "coincidental," AP noted.)

This seemingly out-of-the-blue friction between the president and his top cop comes just days after Barr told ABC News that the president's incessant tweeting about ongoing DOJ cases "make it impossible for me to do my job." Trump, in turn, tweeted that he has "the legal right" to interfere in the Justice Department's business.

Trump later doubled down on his assertion, telling reporters Tuesday that "I do make his job harder," and (falsely) dubbing himself the "chief law enforcement officer of the United States," while insisting that he has "total confidence" in Barr's work.

Of course, Barr's reported threat to pack up his toys and go home seems less like a real challenge to the president and more like an effort by the attorney general to pay lip service to the now-antiquated idea that the Justice Department should actually be an independent entity immune to the increasingly corrupt efforts of an increasingly corrupt chief executive. If anything, Barr has shown himself to be perfectly comfortable transforming his department into an ostensible extension of the White House. Remember how he was directly implicated in Trump's impeachment-earning Ukraine gambit?

Barr's entire legal career has been spent advancing the notion that presidents should enjoy expansive executive powers with little to no meaningful checks or restraints. That he would suddenly decide enough is enough, and quit when his most cherished legal theory is actually put into action, would be laughable if it weren't so transparently bogus.

No, William Barr isn't going to resign. He just wants you to think he's the kind of guy that would.