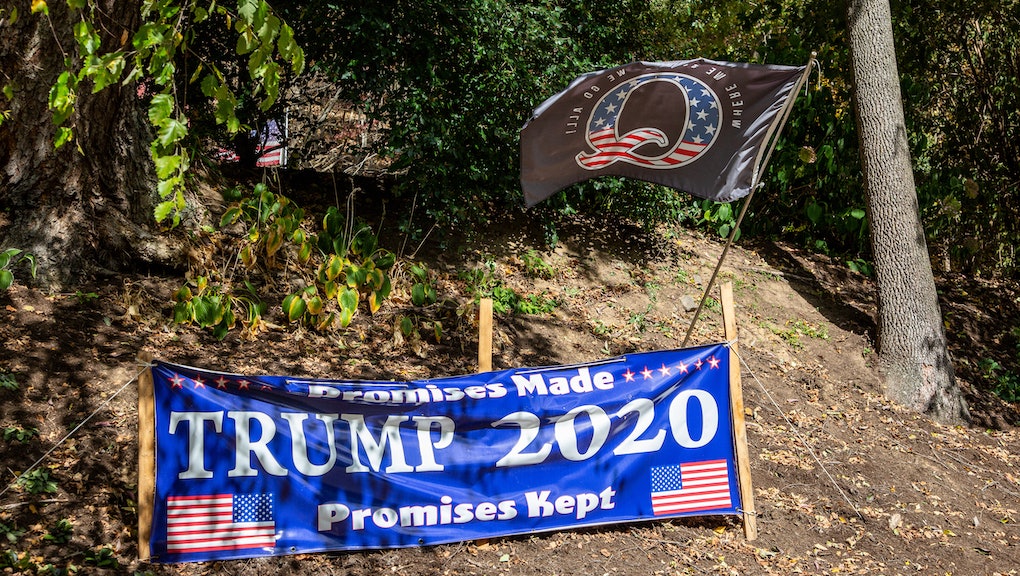 Does Donald Trump actually understand what QAnon is?

President Trump's tenure in office has been riddled with instances of absurd ramblings and cringe-worthy moments of brain failure — so much so that anyone delusional enough to defend the president's "very good brain" risks looking as dumb as Trump does.

In some instances, Trump's inability to grasp basic facts and concepts constitutes a sort of harmless ephemera that, while not good by any stretch of the imagination, doesn't have much impact on the day-to-day lives of most Americans. But other times, the president serves as a terrifying reminder that extreme narcissism and extreme ignorance are an unfathomably dangerous combination. And perhaps nothing in recent months exemplifies that dynamic more than Trump's public embrace of QAnon.

Earlier this summer, Trump raised eyebrows and dropped jaws when he refused to condemn the sprawling conspiracy theory that had already been singled out as a potential domestic terror threat by his own FBI.

"I don't know much about the movement other than I understand they like me very much, which I appreciate," Trump exclaimed in August, when asked at a press conference about the nebulous goulash of anti-Semitism, satanism, Pizzagate leftovers, and whatever other deranged fantasies are convenient at any given time.

Not great. And now, thanks to a new report from The Washington Post, we've learned that the president's understanding of QAnon — which now has multiple adherents poised to enter the upcoming congressional class — really might be that simplistically limited.

Per the Post, at some point this summer, Trump interrupted a Senate strategy meeting with Majority Leader Mitch McConnell and Indiana Sen. Todd Young (R) to bring up Marjorie Taylor Green, then a congressional candidate in Georgia (again, this was a meeting about the Senate) and a QAnon believer who is now strongly in the running for most reality-detached lawmaker after winning her race last month.

QAnon believers, Trump reportedly insisted, "basically believe in good government" — which technically is true, I suppose, if you're of the mind that "good government" is when a secret anonymous government insider carefully leaks labyrinthine clues about a supposed cabal of child-devouring devil worshippers who occupy the highest levels of political power in this country.

As the Post notes, Trump not only seemed to have no idea what the potentially millions of conspiracy believers actually, y'know, believe — he also didn't even know how to pronounce their name, calling the group "Q-an-uhn" in seeming ignorance of the fact that the name is simply a portmanteau of the letter "Q" and the word "anonymous."

In any case, after a long and almost certainly painfully uncomfortable silence from the other meeting attendees, per the Post, White House Chief of Staff Mark Meadows spoke up to submit that he personally had never heard of the group dedicated to saving infants from cannibal satanists described that way.

All this would be alarming enough as it is, but it has since taken an even more ominous turn in recent weeks, as the president has either deliberately, or simply by sheer desperate instinct, aligned himself with some of QAnon's more palatable (if still wholly unhinged) theories about stolen elections and ballot fraud and vast anti-Trump conspiracies behind every corner.

Does Trump know what sort of movement he's tapped into? Does he care? Does it matter either way? The answer to all three questions is likely "no." Because for Donald Trump, ignorance is bliss, and there's noting more blissful to him than having a mass of rabid supporters ready to do whatever he says. And if, it so happens, they also believe his authority stems from a righteous battle between good and evil? Well, if he knew that's what they really thought, he'd probably be pretty happy with that too.

More like this
The Trump/O'Reilly fashapalooza is putting up some sad ticket sales numbers
By Rafi Schwartz
Trump kept a Gitmo prisoner detained for 5 extra years. Biden has finally freed him
By Rafi Schwartz
Nancy Pelosi took a stand on the Jan. 6 committee, and it left Republicans whiny as hell
By Rafi Schwartz
Stay up to date