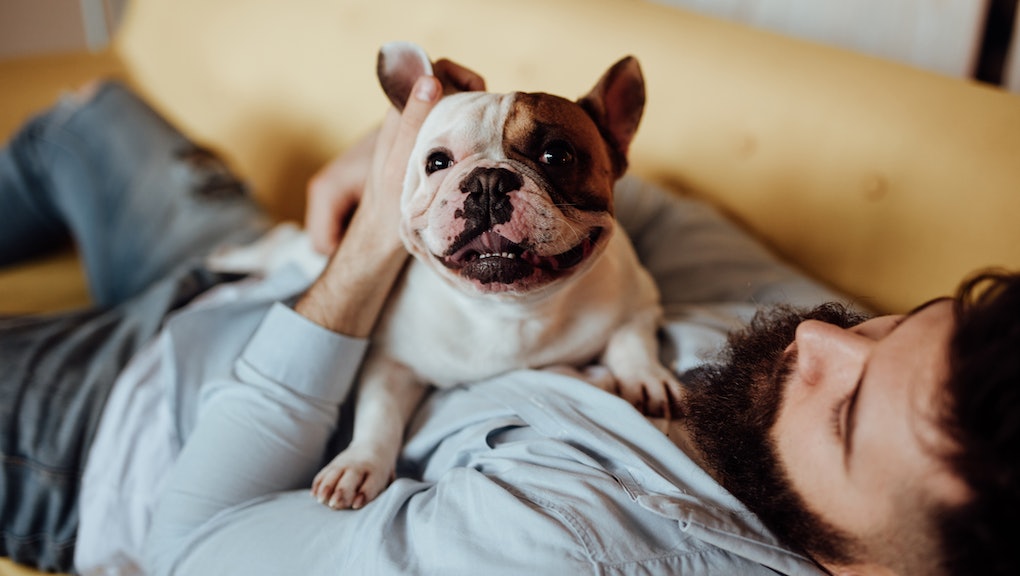 Does my dog love me or is she just in it for the food?

My dogs, Stevie and David, definitely love me. I can see it in the way they look at me, the way they follow me from room to room, and the way they bark loudly at any being who comes within ten feet of me. I think of the three of us together as a ride-or-die pack of hardscrabble rebels on an endless adventure. But sometimes I wonder if our relationship is as deep and meaningful for them as it is for me. It’s impossible for us to know exactly what an animal is thinking, but experts do have some ideas. So I asked them: Do my dogs love me, or are they just in it for the kibble?

“Dogs have a range of complex emotions and cognitions like us,” says Philip Tedeschi, executive director of the Institute for Human-Animal Connection at the University of Denver. But, Tedeschi adds, “we want to be careful not to require that dogs have to have human emotions in order for us to recognize them.” So, yes, he says, dogs can “love” us in certain senses of the word, but we humans still have to be careful that we don’t expect our pets to act — or think — like people.

The way dogs function and think is, of course, very different than how humans do. But in some ways, Tedeschi explains, their brains do work similarly to ours. “Dogs share much of the same neurological structures and use the same parts of the brain as people do when feeling love and affection.” He cites a recent study by Emory University, in which researchers used MRIs to see how dogs’ brains respond to the voices of the people in their lives. They found that the parts of the dogs’ brains that light up when they hear their person are the same parts that are activated in human brains when we hear the voices of people we love.

Some experts argue, however, that we can’t necessarily attribute this neurological response to love. “Unfortunately, the field currently just doesn’t have sophisticated enough methodologies to provide a definitive answer to this question,” Annie Valuska, senior pet behavior scientist at Purina, tells me. “However, the answers we do have certainly indicate that dogs are capable of forming strong emotional bonds with their owners,” she adds.

Although Tedeschi and Valuska may not agree completely on terminology — what Tedeschi calls “love” in dogs is what Valuska describes as “emotional attachment” — they both agree that dogs do respond neurologically to people they’re close to. And it’s not just their brains that respond in some sort of Pavlovian way. Dogs also chemically respond to pleasant interactions.

Studies have shown that when humans cuddle with dogs, oxytocin — a.k.a. the love hormone — is released in their bodies, which means that when we pet them, they get that amazing whole body snuggle high that we get when we snuggle with each other. It’s not just them, either. Research suggests that when we pet our dogs, a kind of oxytocin feedback loop is created that is similar to the one created between mother and child. In other words, when we pet and cuddle our pets, feel good hormones are released in both dogs and humans and this creates a physiological bond between us.

So how can you tell if your dog feels bonded to you? “One way dogs sometimes show ‘love’ is eye contact,” Valuska says. She explains that even the simple act of gazing at us can initiate that oxytocin feedback loop in dogs. And, unlike humans, it’s unlikely for a dog to catch your gaze by accident. “Dogs look for opportunities to make eye contact, or gaze, to solidify their bond with a person,” says Tedeschi. When a dog cares about you, then, it will seek out your gaze to keep the link between you strong.

Some of my friends think it’s kind of crazy-pet-person of me to insist I know what my dogs are thinking by the looks on their faces, but I swear to you that Stevie has the strongest side-eye I’ve ever seen. I may not be wrong; Tedeschi says dogs can show some of their emotions on their faces. “Dogs have evolved to be expressive beings to better connect with humans,” Tedeschi explains.

Facial expressiveness isn’t a common feature in the canine kingdom, either. Apparently, only domesticated dogs use the muscles needed to make expressions we find emotionally understandable. “Dogs have evolved to utilize muscles that only domesticated dogs have to have greater connectedness with humans,” Tedeschi says. I interpret this as: Dogs wanted to be our best friends so badly that over time they evolved facial muscles so that we can understand each other. Sometimes evolutionary biology is cute as hell.

But all of this could still be chalked up to dependence, right? Dogs could have evolved this way so that we would feed them and help them survive. How I can be sure that what my dogs feel for me is real affection? “The fact that there is material value in having a successful relationship is a feature of caring, not the other way around,” Tedeschi says. This is some strong wisdom. What Tedeschi implies is that there are material rewards for dogs with strong emotional attachments to humans, but that logically, it doesn’t make sense for love to be the reward for behavior that gets you fed. In other words, a loving dog-person relationship is not the reward for kibble, kibble is the reward for being able to have a loving relationship.

Tedeschi also suggested that perhaps we can get a sense of the mutuality of the love between dogs and humans by the very fact of our aligned evolutionary paths. “Dogs are found wherever we find humans. It’s clear that dogs will without question, as a species and as individuals, alter their form and capacities to fit alongside humans,” he said. But, as Tedeschi noted, most people don’t need all this science to prove the realness of their dog's love. All we have to do is look. Chances are, they are looking back.

This article was originally published on Sep. 18, 2020

More like this
Wanting to start a family motivated us to pay off $126K in a year
By Marianne Eloise
Can't bear to be in a relationship right now? Blame de-cuffing season
By Suzannah Weiss
Can TikTok's new résumé feature really help you find a job?
By Tracey Anne Duncan
Stay up to date