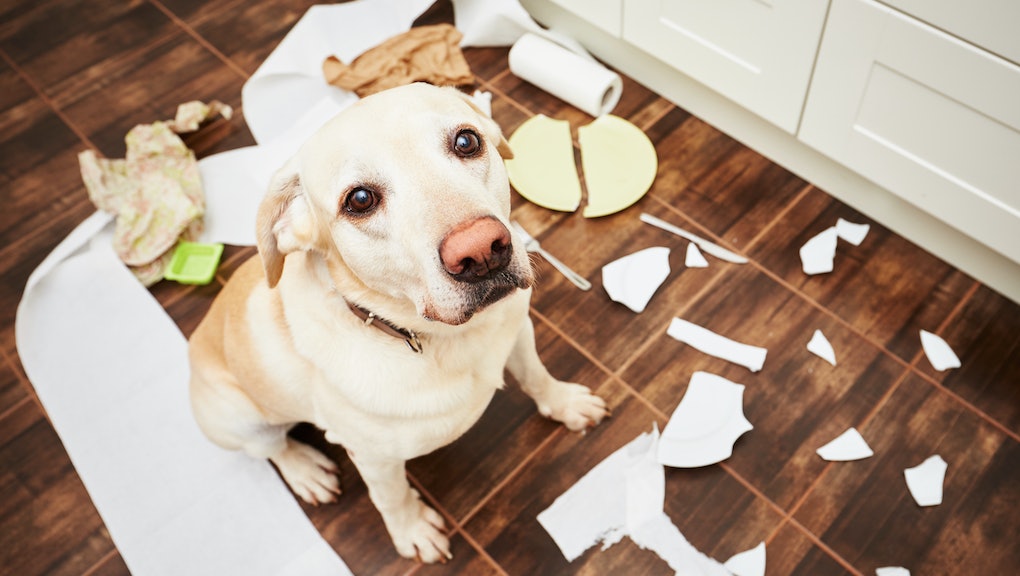 When my dog, David Bowie, was a bit younger, we argued a lot. The conversation was always the same. “Sit,” I would say, attempting to bribe her with a treat, and she would bark, run away, and come back to me with, say, a half-chewed flip flop or bluetooth speaker. I was frustrated, going broke on treats, and terrified that she would turn into a “bad dog.” I probably didn’t need to stress as much as I did, though, because according to new research, dogs go through a puberty phase that’s akin to human adolescence. David was likely just a being a rebellious teenager testing my limits.

The small study, which was published this week in the journal Biology Letters, investigated the behavior of 93 female dogs being trained as guide animals to their responsiveness to commands given by humans, reported The Guardian. Sixty-nine of the pups were observed at five-months-old and then again at eight months old. The older dogs, it turns out, were twice as likely to ignore the “sit” command as the younger dogs. So, it wasn’t that they didn’t know how to sit, it was that they didn’t want to. Typical teenagers.

The study suggests that, like some human teenagers who are good at school but terrible at home, dogs go through a phase of rebellion that is specifically directed at their “parents.” "What we found is evidence that dogs show a period of reduced obedience towards their owners,” Naomi Harvey, a zoologist who worked on the research, told BBC, and added, “This behavior is specific to their owners and not to other people," Harvey said. Dogs who were less likely to sit for their carers at eight months were more likely to obey the “sit” command for strangers. These eight-month-olds were angels in the streets, but devils off the leash.

Their hormones are raging and they don’t know whether to pack up with the humans caring for them or to try to find a mate of their own species.

“This is a very important time in a dog's life," Lucy Asher, the animal behavior scientist who led the study, told BBC. This phase, the researchers explained, is partially hormonal. "It is associated with all of the issues going on inside the dog during puberty,” Harvey said, according to BBC. “The hormonal fluctuations and the remodeling of the brain to become an adult brain cause a lot of issues." These dogs aren’t trying to be difficult, then, it’s just that their hormones are raging and they don’t know whether to pack up with the humans caring for them or to try to find a mate of their own species, reported the BBC.

Sadly, this is the age when a lot of dogs are abandoned by the people who loved them when they were puppies. The researchers said they hope that these findings will help humans be more understanding with their teen pups. “It's important to remember it's not the dog deliberately behaving badly, it's just their biology,” Asher told BBC. “As with human teenage children, owners need to be aware that their dog is going through a phase and it will pass."

More like this
Studies suggest that Pfizer is no longer the cooler vaccine
By Ian Kumamoto
How to save your skin from climate change
By Melissa Pandika
Uncontrollable, weed-induced vomiting is on the rise, according to new research
By Tracey Anne Duncan
Stay up to date