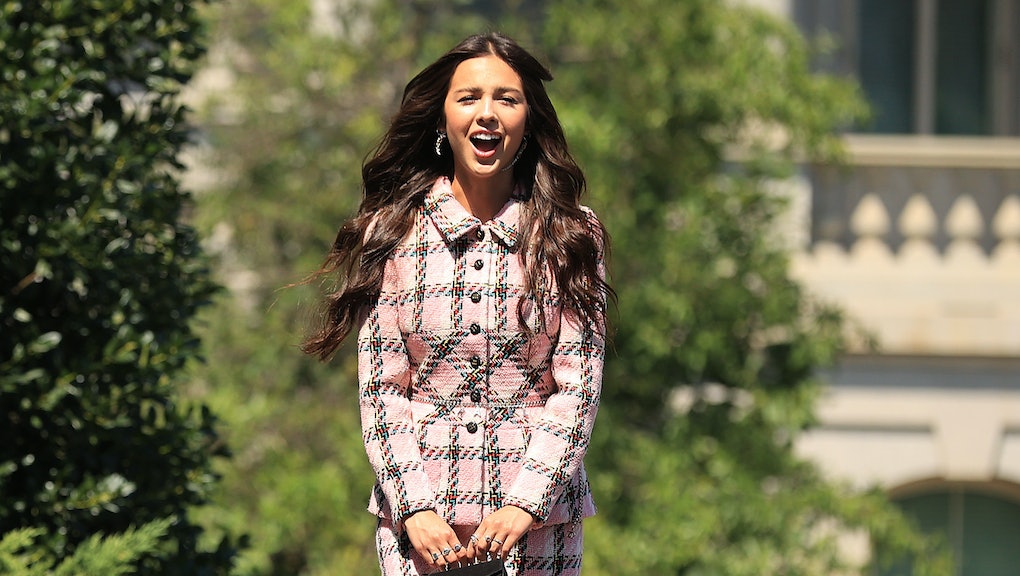 You can't turn on the radio these days without hearing an Olivia Rodrigo song. Lines from "Deja Vu" about strawberry ice cream and Billy Joel have been stuck in my head all summer. Even when her tunes weren't being piped over the airwaves into my ear holes, I sought out Sour on streaming, screaming along to "Good 4 U" on repeat while exorcising someone from my psyche. It seems like all of America did the same. Rodrigo's singles have been glued to the top of the Billboard charts since "Drivers License" debuted in January, catapulting her to pop music superstardom.

Other artists who didn't directly work on the album are reaping the benefits too, since Rodrigo has added a number of songwriting credits to her biggest hits. For instance, Paramore's Hayley Williams and Josh Farro are now credited on "Good 4 U" to acknowledge an interpolation of their 2007 song "Misery Business." A fan-created mashup of the songs to showcase their similarities has racked up over three million views on YouTube. Similarly, Rodrigo gave songwriting nods for "Deja Vu" to Taylor Swift, Jack Antonoff and St. Vincent. Swift and Antonoff are also credited on "1 Step Forward, 3 Steps Back" for a piano melody borrowed from the song "New Year's Day."

Interpolation, sampling and other means of building on another artist's work is pretty common in music. (More on this in a bit.) What's wild about the Rodrigo situation is that industry folks have started running the numbers on what handing out songwriting credits means for her — and others' — financial bottom line. The consensus is that Rodrigo has signed over a small fortune in royalties.

A new report by Billboard estimates Paramore could be pocketing about $1.2 million off the success of "Good 4 U." After the news broke about their retroactive credit, Williams wrote "our publisher is wildin rn" on Instagram. Meanwhile for "Deja Vu," the report predicts Swift has received $325,678 in royalties, Antonoff has gotten $260,542 and Clark has earned $65,135. Swift and Antonoff have also likely received around $86,000 for "1 Step Forward, 3 Steps Back."

Here's how the windfall is being divvied up: Williams and Farro get 50 percent of the royalties from "Good 4 U," while Rodrigo and her songwriting partner Daniel Nigro split the other 50 percent. The song rocketed to number one on the Billboard Hot 100, then sat at number two for a record-tying 11 weeks and now rests at number three. That's a whole lot of plays and a whole lot of royalties. Swift, Antonoff and Clark pocket a combined 50 percent from "Deja Vu," with Rodrigo and Nigro again splitting the other half. Swift and Antonoff each get a third of the proceeds from "1 Step Forward, 3 Steps Back," and Rodrigo nets the final third for writing the song solo.

The similarities between "Good 4 U" and "Misery Business" are pretty obvious to untrained ears. Rodrigo has been transparent about what she borrowed from Swift, telling Zach Sang: "I came up with the '1 Step Forward' concept and I sort of wrote a verse and a chorus. I was in the car on a road trip, and when I got home, I decided to sing it over the chords of 'New Year's Day.' I think they're really beautiful chords. I was lucky enough to get that approved, and it's on the record." The repurposed elements from Swift's "Cruel Summer" in "Deja Vu" are a little harder to pinpoint, essentially yelling during the bridge, though Rodrigo has acknowledged its influence on her song.

All of these instances of musical borrowing are classified as interpolation, which means incorporating an element of an earlier song into a new composition, rerecording it and making something new. It's different from sampling, where an artist inserts another recording wholesale into their track. A lot of artists view interpolation as an organic, essential part of songwriting. For example, people accused Rodrigo of stealing a guitar riff from Elvis Costello for her track "Brutal," but he didn't care. "This is fine by me," Costello tweeted. "It's how rock and roll works. You take the broken pieces of another thrill and make a brand new toy. That's what I did."

Maroon 5 lead singer Adam Levine also defended Rodrigo on Instagram: "These are tricky things and anyone who's ever written a song knows that you rip something off inadvertently, and it makes it to tape, and then it's released and then there's a lawsuit," he said, adding that copyright infringement has "become more of a gray area that's reared its ugly head these days." He's referring to recent high-profile cases involving songs like "Dark Horse" by Katy Perry and even the classic "Stairway to Heaven" by Led Zeppelin. Pharrell and Robin Thicke lost a multi-million dollar lawsuit brought by Marvin Gaye's estate for ripping him off with "Blurred Lines."

It makes sense that musicians get inspired by and build on riffs and melodies in their favorite tunes. The question is how to acknowledge the inevitable borrowing. Rodrigo is still undoubtedly making a lot of money from her smash-hit debut album, so it's hard to feel that bad for her. But handing over a blanket 50 percent of the royalties from some of her biggest hits? As Rodrigo sings on Sour's opening track: "God, it's brutal out here."